Home » Celebrities » Taylor Swift: Katy & I grew ‘past allowing ourselves to be pitted against each other’ 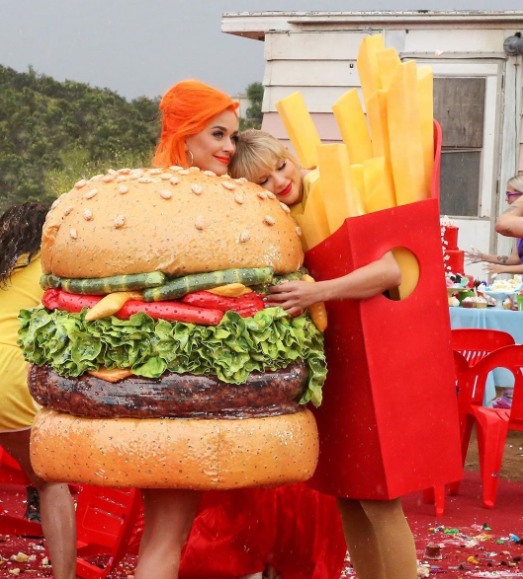 Well, if there’s one thing for which Taylor Swift consistently excels, it’s making sure she dominates the headlines over dumb sh-t. We could be talking about the very strange messaging of “You Need to Calm Down” or any of the thinkpieces I referenced yesterday, but instead we’re talking about Katy Perry and the squashed beef. We’re talking about it because Taylor is talking about it, and because that’s the conversation she’s comfortable with. You know why she’s comfortable? Because she thinks she “won” the beef. She thinks Katy was weak for apologizing to her (over nothing) and for wanting to be all about peace-love-and-happiness. Taylor made Katy wait until Taylor could find a way to profit from it, so here we are. The beef is squashed in a puddle of rainbow flags, false eyelash strips and drag queens.

As we heard yesterday, Taylor explained the End of the Beef to the radio show Capital Breakfast this week. She basically said that Katy made the first move by sending her an olive branch and how they hugged at a party and blah blah blah. But there were these other quotes too:

“We have been on really good terms for a while. But the first time we saw each other was at this party, and it was just very clear to both of us that everything was different. That we had grown up. That we had grown past allowing ourselves to be pitted against each other. It just was really, really clear that we remembered how much we had in common. Both of us have been in a really good place for a while, but I don’t know if either of us knew if we were gonna talk about it publicly.”

“…It was just very clear to both of us that everything was different. That we had grown up…” I get that. But it literally took five years and Katy sending her an actual OLIVE BRANCH for Taylor to “forgive” Katy for the crime of… being friends with some backup dancers. Katy had already grown past it in real time. Taylor, the champion petty AF grudge-holder, was the one who needed to grow up. Also, this: “That we had grown past allowing ourselves to be pitted against each other.” OMFG. NO ONE DID THIS TO YOU. TAKE SOME RESPONSIBILITY YOU SNAKE. Taylor is 29 years old and still convinced that nothing is EVER her fault or her responsibility. My God.