Sir Mick Jagger was devastated when his long-term partner, fashion designer L’Wren Scott, was found dead in her Manhattan apartment seven years ago.

Now to keep her legacy alive, the Rolling Stones frontman reveals he is initiating a sale of her dress collection, set to raise as much as £115,000, to boost a scholarship in her name at Central Saint Martins in London.

The 77-year-old father of eight met the former model — real name Laura — in 2001, and was in a romantic relationship with her until she took her own life, aged 49, after a struggle with depression. 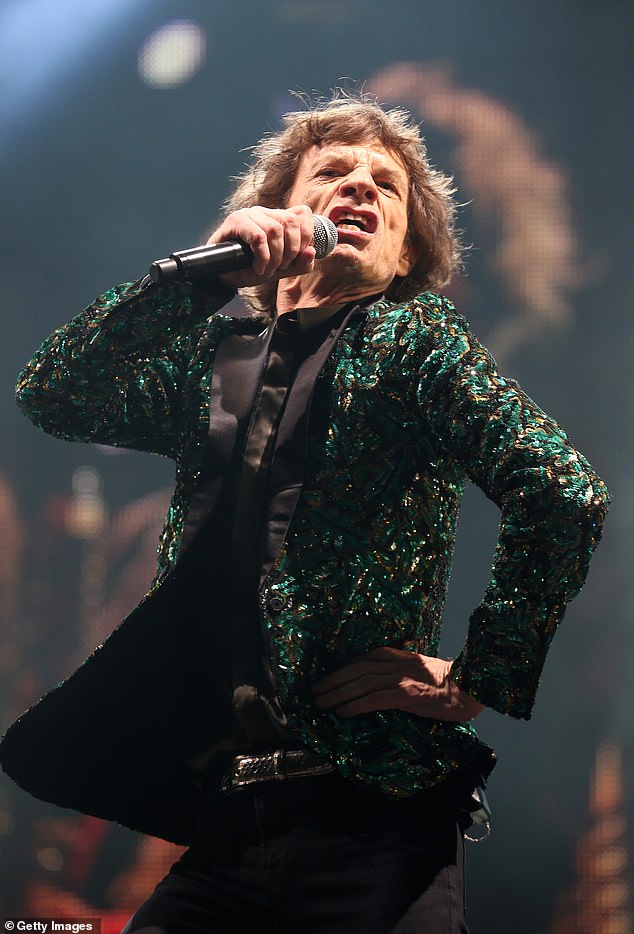 Mick, now in a relationship with U.S. ballerina Mel Hamrick, 33, mother of his four-year-old son, launched the scholarship at Central Saint Martins in 2015 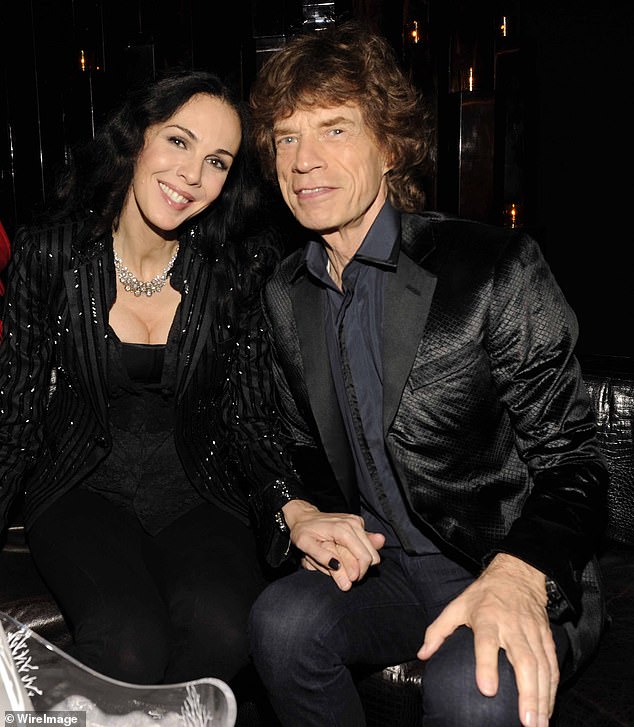 June’s sale will fund the renewal of the L’Wren Scott Scholarship, which has been awarded annually ever since to cover the two-year MA fashion course’s fees and help with living costs

On what would have been her 57th birthday this week, Sir Mick wrote in tribute: ‘Your work continues to inspire a new generation of designers.’

He also revealed that a collection of her dresses will be put up for auction at Christie’s in June, with proceeds going to her scholarship fund at London’s University of the Arts.

The collection, which will be sold online from June 9 to July 1, comprises 55 curated lots designed by Scott between 2008 and 2014. They were worn either by L’Wren or her clients such as Nicole Kidman, Madonna and Naomi Campbell.

The items also include two bespoke stage jackets — expected to sell for up to £30,000 each — that Scott custom-designed for Mick.

One is the ‘glamouflage’ jacket he wore to headline Glastonbury (below) the year before her death. It is made of black satin and is beaded, sequined and embroidered with oak-leaf motifs in green, black and khaki.

Mick, now in a relationship with U.S. ballerina Mel Hamrick, 33, mother of his four-year-old son, launched the scholarship at Central Saint Martins in 2015.

June’s sale will fund the renewal of the L’Wren Scott Scholarship, which has been awarded annually ever since to cover the two-year MA fashion course’s fees and help with living costs.

‘I am still struggling to understand how my lover and best friend could end her life in this tragic way,’ Mick said at the time of L’Wren’s death. ‘We spent many wonderful years together and had made a great life for ourselves.

‘She had great presence and her talent was very much admired, not least by me. I will never forget her.’

Don’t count on Rag’n’Bone Man — famed for his hit Human — to write any music inspired by his marital woes.

‘The world doesn’t need another heartbreak record,’ he says. ‘I consciously did not write any songs around the period where I was not feeling that great.’

Still mourning the loss of her father, racing driver John Crichton-Stuart, the 7th Marquess of Bute, who died last month, Lady Lola Bute is doing her best to keep her family’s spirits up.

On what would have been his 63rd birthday this week, the 21-year-old hosted a bittersweet celebration at their home in London, with guests including her mother, John’s widow, fashion designer Serena Bute.

At one point Lady Lola got on to a table to sing along to Elton John’s Your Song. ‘So much love in one room, I didn’t think it was possible,’ she said. ‘Happy birthday dada. The king of cool.’

Being the boyfriend of a pub landlady isn’t all it’s cracked up to be, according to model-turned-publican Jodie Kidd, 42, who lives with former Royal Marine Joseph Bates in West Sussex.

‘My partner hates going to the pub with me — even if we’re going as customers, I’ll just be sitting there scanning it and thinking “that person has an empty glass” or “I’ll go and clear up”. I’m a nightmare and constantly on the go.’

Monarch of The Glen star Susan Hampshire, widowed in February after 40 years of marriage to theatre impresario Sir Eddie Kulukundis, is returning to acting.

‘It’s only a small part, but so lovely to have a job,’ she tells me of her role in the film Smyrna My Beloved, which is to be shot in Greece.

‘Eddie’s parents were Greek,’ she adds. ‘But he was born in the UK so never felt Greek and never returned there.

But I hope to do a pilgrimage to the island of Kasos where his father came from. Eddie had been poorly since 2002, but it was a pleasure to look after him.

He was the sweetest human being.’ Filming starts in July in Athens. Fortunately, Susan, 83, will not have to speak Greek for the part.

She says: ‘I took lessons from my mother-in-law before she died in 1992, but I’ll have to take more if I am to remember how to order a cup of tea.’

Andrew Ferguson, the half-brother of Sarah, Duchess of York, who runs the family’s Dummer Down Farm where Fergie and her elder sister Jane grew up, is on the warpath with Amazon.

He’s alerted friends and neighbours about the threat to uproot a magnificent avenue of 67 oaks and three mature beech trees on the edge of Dummer village, to make way for an Amazon warehouse, and is drawing attention to a petition against it. ‘These trees line the old road into the village of Dummer, meaning they are of historical significance,’ it reads.

‘They also are the home of up to 2,500 different species of wildlife. Up to 1,750 houses are being built right next to the warehouse site.’

Andrew — the eldest of Major Ron Ferguson’s three offspring by his second marriage — tells me the credit should really go to his wife, Florence, whom he married two years ago, for putting the petition on social media, adding that villagers ‘all want to support’ the campaign to save the trees. 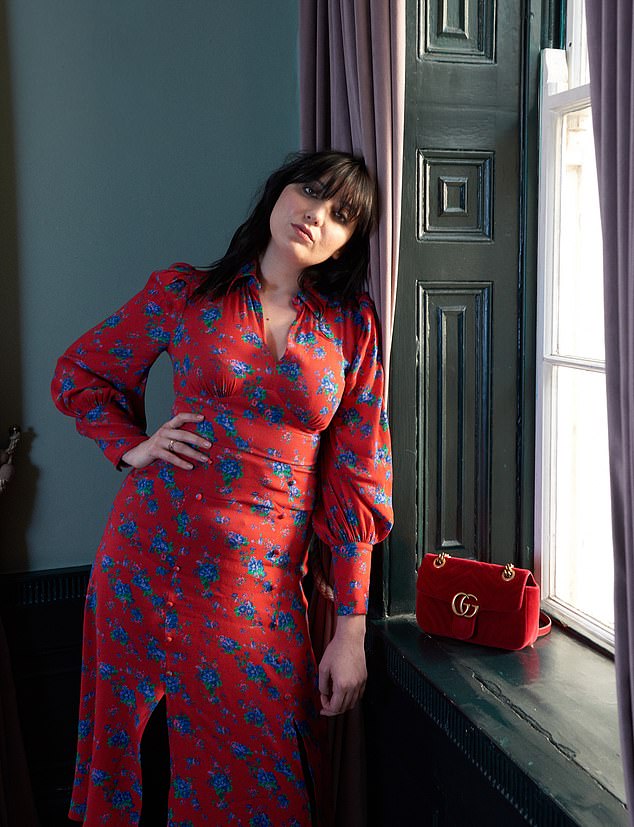 The 32-year-old model revealed she has taken the next step with her boyfriend, property developer Jordan Saul, 27, (below) by moving him in.

After putting the finishing touches to her home in London, the 32-year-old model reveals she has taken the next step with her boyfriend, property developer Jordan Saul, 27, (below) by moving him in.

‘I’ve renovated my house and I finally got to move in. My boyfriend helped, so it felt only right that he moved in with me,’ explains the daughter of musician Gavin Rossdale and fashion designer Pearl Lowe.

The couple started dating last year, and Daisy describes him as her ‘best play mate’ with ‘the most beautiful heart’.

The Crown’s Olivia Colman, who plays the Queen in the Netflix drama, admits her acting ambitions started at the age of four.

‘My first time on stage was a nativity play, and apparently — I don’t remember it . . . .although I do a little bit — I punched the angel next to me. She stole my line! It’s understandable, isn’t it? Stick to your own lines.’

Russell rebranded as a dad messing about on a barge 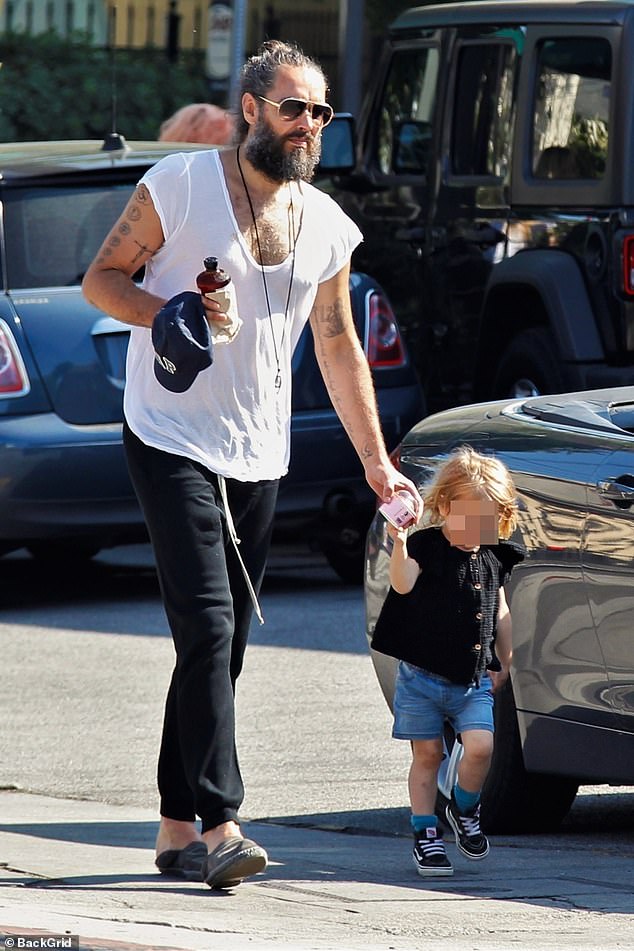 ‘We have been narrow-boaters for four years and still manage to get into all sorts of rope tangles, bush scrapes and lock-entry adrenaline terror,’ says Laura, mother of Russell’s two daughters.

‘Boating is a bonding activity for us, as it comes with its challenges and makes us work together as a team, while the endless enchantment of surrounding nature and water nourishes our souls.’