SEBASTIAN SHAKESPEARE: Joke’s on him as John Betjeman poetry scholar falls for spoof

Harry Potter publisher Bloomsbury has secured its place in literary history by putting the boy wizard’s adventures on the printed page.

But its latest publication, Harvest Bells — a collection by the late Poet Laureate Sir John Betjeman — may end up being celebrated for all the wrong reasons.

For I can disclose that a poem in the anthology of his ‘new and uncollected’ works is not, in fact, by Betjeman at all — but is a spoof jointly composed by Richard Ingrams, former editor of satirical magazine Private Eye, and cartoonist Barry Fantoni.

The parody — about the unmasking of Sir Anthony Blunt, Surveyor of the Queen’s Pictures — appeared in Private Eye in 1979, when Blunt was stripped of his knighthood after being exposed as a former Soviet spy. 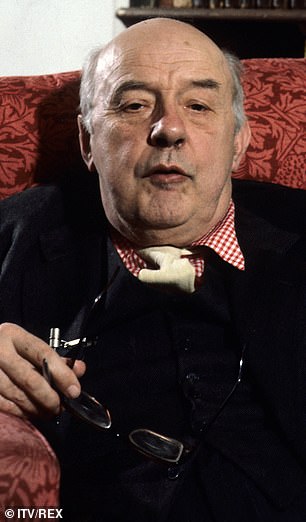 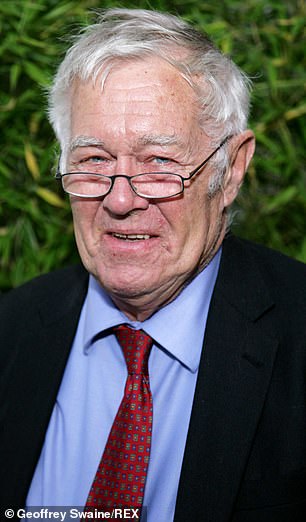 Former Private Eye editor Richard Ingrams, right, wrote a spoof poem in his satirical magazine in the style of the then Poet Laureate Sir John Betjeman. That poem has just been included in an anthology being published by Bloomsbury

Poor old Bluntie! So they got him,

‘Mole Revealed’ they say ‘at last’,

On a bleak November morning,

What an echo from the past!

Old Marlburian, I recall him,

In his flannel bags and hat Wandering by the River Talbot Sometimes straining at a gnat.

Who’d have guessed it – ‘Blunt a traitor’

Carrying on with tar and waiter —

There’s a sight I am glad I missed.

Now the nine-day wonder’s over,

Back he goes to Maida Vale.

In his comfy little Rover,

Home to gin and ginger ale.

Was it worth it? Does it matter?

In the end we do not know.

Now I’m madder than a hatter,

Goodness me! It’s time to go.

Ingrams, 81, reacts to the extraordinary howler with laughter and disbelief. The poem — Lines On The Unmasking Of The Surveyor Of The Queen’s Pictures — originally appeared in Private Eye with a note ostensibly from Betjeman reprinted at the end. ‘Put it in if you like it. It is not very good, is it? JB.’

‘We wrote quite a few Betjeman poems,’ Ingrams tells me of his collaboration with Fantoni. ‘We usually put at the end: “It’s not very good, is it?”’

A manuscript of the poem resides in a collection of Betjeman papers held by the University of Victoria in Canada, which is where Dr Kevin Gardner, the American scholar who compiled and edited Harvest Bells, found it.

Gardner even takes Betjeman to task in his book for making errors in his poem. ‘Betjeman commits two errors: the river that Betjeman would have recalled seeing Blunt walk beside at Marlborough was the Kennet, not the Talbot; and Blunt did not retire to Maida Vale but rather to a flat near the Courtauld Institute [in the Strand].’

Dr Gardner told me yesterday: ‘Betjeman’s daughter Candida was involved with the magazine and was a close friend of editor Richard Ingrams, and that gave me the notion that Betjeman could have contributed a satirical piece to Private Eye. Many Betjeman parodies exist, often in unsigned manuscript and typescript versions, making it easy to be taken in. I made an assumption that is apparently wrong.’

Boris, off the record…

‘He can’t be honest because he’s immoral, unprincipled, narcissistic and a reckless and absent father,’ says Laura-Jane, 36. ‘It’s unforgivable and cruel not to acknowledge your own flesh and blood.

‘Are we really going to have a Prime Minister who refuses to go on his children’s birth certificates?’

Foley and Rice were in a relationship but split up in 2016, by which time Laura-Jane was pregnant.

Going, going, gong! The Queen is advertising for a manager for the Central Chancery of the Orders of Knighthood to organise her honours.

The job is worth up to £40,000 a year and, not surprisingly, ‘an understanding of State Ceremonial protocol, the Offices of State, the Church and the Military would be an advantage’.

And, who knows, there might even be a gong in it, too?

Who Has Luke Bracey Dated? His Relationship History Is Mysterious