Celebrity chef Sandra Lee is doing it for herself. The “Semi-Homemade Cooking With Sandra Lee” host glowed when she recently attended the LuisaViaRoma for UNICEF gala at the Certosa San Giacomo of Capri. Vogue noted that the gala auction hauled in over 5 million euros for UNICEF Italia, and also provided plenty of entertainment. Katy Perry and John Legend enchanted the attendees with their duet of “Moon River” and celebrities like Chrissy Teigen, Vanessa Hudgens, and Orlando Bloom attended the event.

Those who follow Lee know that she’s a breast cancer survivor and had a double mastectomy in 2015. More heartache followed in 2019 when she and Andrew Cuomo split after 14 years together, per Today. The man who Lee once described as being “so patient and mellow” was no longer the love of her life, per The New York Times. However, things seemed to be on the upturn for the blonde bombshell.

In July 2021, Lee took to Instagram to celebrate her 55th birthday. She told her fans that she was pretty much on track with her 30-pound weight-loss goals. At the time, she only had 5 pounds to lose to reach her desired weight and said, “Wanted to meet my goal weight before I turned 55 which is tomorrow but I’m pretty happy with where I am-I feel great!” Now, the Food Network host has made her first public appearance since breaking up with Cuomo, per People, and she looked fabulous. 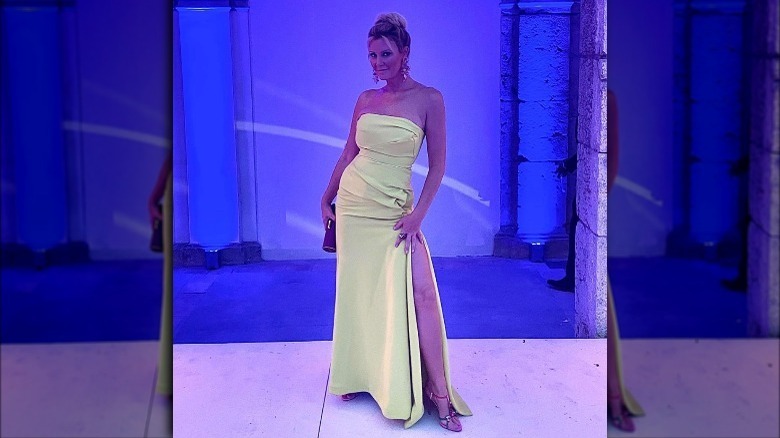 The celebrated host of “Sandra’s Money Saving Meals” was having the time of her life at the LuisaViaRoma for UNICEF gala. She also looked amazing in a chartreuse off-the-shoulder gown that was tastefully draped over her curves and showed off her toned body, per an Instagram share. She posed confidently, flashing her leg from the sexy thigh-high slit, and smiled at the camera.

Lee captioned the photo, “Tonight was The Gala to support UNICEF in Capri-after creating the LA board with two girlfriends and serving as a Unicef special Emissary.” She continued, “I have to say I’ve been to many many events, but this has been the most extraordinary event I have been to in so long.” Lee went on to thank everyone involved before concluding, “you have made the difference in hundreds of thousands of children’s lives.” The food expert also exclusively told People, “I’m having the best summer of my life.”

Lee paraded her dance moves to the sound of Barry White in an Instagram post. She was clearly enjoying herself at the glitzy event as she beamed at the camera. It seems as if Lee’s doing well after breaking up with Andrew Cuomo. Perhaps she should have been dancing to Justin Bieber’s “Love Yourself” instead.