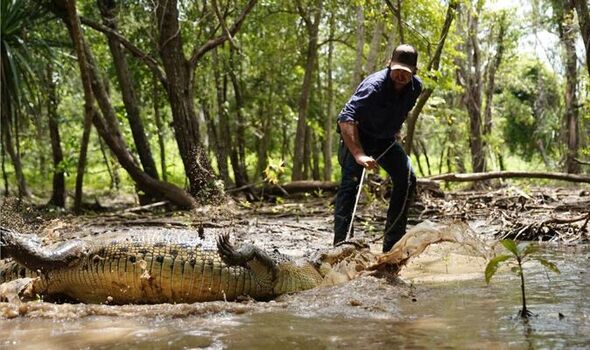 “They’re the kings, the most aggressive in the world,” he says. “They can grow up to 22 or 23 feet long.” Star of the popular Netflix series Wild Croc Territory, and owner of an Australian safari camp, Wright has inevitably been compared with late, great “Crocodile Hunter” Steve Irwin, that other Aussie conservationist and TV presenter who died tragically in 2006 after being stung by a stingray while diving on the Great Barrier Reef.

Just like Irwin, Wright appears to take risks that border on the insane.

For his latest series, where he and his team trap killer saltwater crocodiles (or “salties”) in Australia’s Northern Territory, before moving them to safe locations, he regularly finds himself standing astride 18ft-long beasts, doing his best to avoid the thrashing tails at one end and the monstrous
teeth at the other.

“Being regarded in the same light as Steve Irwin is a pretty big honour,” Wright says. “He showcased Australia very well and was loved all over the world. Outside of David Attenborough, he was the pinnacle of conservation.”

But in a way, he has taken on Irwin’s mantle of teaching people about wildlife through risky animal encounters.

In his latest series, Wright and his team scramble all over the tropical savannas, estuaries and floodplains of Australia’s far north in search of killer crocodiles. Using helicopters, flat-bottomed swamp boats, off-road vehicles and steel cages, they attempt to trap the fearsome beasts.

All while the hapless reptile does its best to bite, roll or thrash its way out of trouble.

TranquiLliser darts aren’t practical as the crocodiles would drown in their watery environment. Wright says even using milder drugs to make them sleepy can be risky for the reptiles. “I’m probably the only wrangler who doesn’t use drugs to calm them down,” he adds.

Of course, this means the crocs are livelier than ever. While filming a previous series, Wright had his ankle broken by a large, swishing tail.

“He was a reasonably big croc, about 14ft long,” he recalls today. “I was going to tie him to a tree and let him calm down a bit.

“I gave him a little tap on the tail with my foot to hurry him up, and he came back at me with the biggest tail swipe ever.” Wright had his legs swept from beneath him, his ankle broken instantly.

Another time, a croc’s tail flipped him high into the air. “I landed on my neck and was knocked out for a few minutes. I thought I’d broken my neck.”

In one episode of the new series, things get particularly hairy when Wright’s colleague Christopher “Willow” Wilson trips and falls from a swamp boat into the water, just feet from an angry crocodile. The team pulls him to safety, but it’s a close call.

A few weeks after filming was completed, Wilson died in a helicopter accident. The series is dedicated to him.

Statistically, very few humans are killed in Australia by crocodiles – less than two a year, in fact.

Down Under, you’re far more likely to come a cropper against sharks, bees, snakes= or kangaroos. According to a coroners’ database, the biggest killers are horses, cows and dogs. But while rare, crocodile attacks can often be gory.

Wright remembers one drunk man who trespassed on his safari camp and had his hand bitten off after poking it through a fence. He has even heard of people breaking into other wildlife parks and trying to wrestle crocodiles. “What are they thinking?” he wonders. “They’d be lucky to walk away from that.”

Unlike these idiots, Wright is armed with years of training in handling wildlife.

During his youth, he spent time living all over Queensland and South Australia, even a short period in Papua New Guinea. “It was a very transient, gypsy life,” he says. “I went to 17 different schools, in different areas.”

From a young age he was intrigued by his country’s diverse, and often dangerous wildlife. “I used to catch deadly snakes and bring them home,” he remembers.

“Any sick or injured animal, I would bring home to look after. Mum wasn’t very impressed, so we did a deal where, if I was allowed a pet snake, I wouldn’t bring any wild snakes home.”

That pet snake turned out to be very impressive indeed: a 10ft-long carpet python. Still, Wright couldn’t resist the lure of wild animals.

Friends would regularly spot lethal snakes in their back gardens, and their parents would understandably want to kill them off. But young Wright would insist on
catching them and moving them to safety. Even as a child, relocating dangerous beasts was his mission.

“Learning at such a young age, you didn’t have as much fear,” he explains. “You didn’t think about death. It was a fun childhood. Lots of adventures to be had.”

After those early adventures, Wright soon moved into wrangling much larger animals. As well as saltwater crocodiles, his CV includes polar bears, wolves, bison, caribou and elk in Canada; elephants and rhinos in Africa; and elephants and orangutans in Indonesia.

Despite crocodiles’ deadly reputation, bears are the animals he says he is always most cautious around.

“A big grizzly or polar bear – if you come face to face with them, that would be the worst.”

In the Canadian forests one time, a woman he was working with died after a vicious attack from a black bear.

Nowadays, it isn’t just self-preservation Wright needs to worry about; he has a young family to consider. He already has a three-year-old son called Banjo, and his wife Kaia, a former model, has just given birth to a baby daughter, Dusty.

The dad realises the Northern Territory isn’t the best place to bring up young kids.

“It’s great at certain times of the year, but it’s a single bloke’s life,” he says.

“During monsoon season, humidity is 90 per cent, and the temperature is 35 degrees every day. And the bugs! For the family, it can get pretty tough to live there.”

In the meantime, Wright is looking ahead to future wildlife adventures. Thanks to his growing global popularity, he also works as an ambassador for
Tourism Australia.

In Western Australia, he is planning wildlife safaris with whale sharks on the ocean reefs, and with kangaroos inland.

There’s even talk of a new Netflix series, but he’s keeping schtum on any details.

As he says goodbye, at the end of the interview, he offers a handshake.

Yes, all 10 digits are still intact. But for how long remains to be seen.