It’ll come as no surprise that Rudy Giuliani’s career is tanking. The former mayor of New York became the private attorney to former President Donald Trump, causing much speculation about the nature of their relationship. Things soured between the two men and the rumored root of their feud is all about money. What else?

Giuliani’s had a tough time as of late in the public light, which has been riddled with embarrassing moments for the attorney. There was that awkward debacle with his hair dye leaking down his face, which a hairstylist helpfully explained. We can’t forget either about the awkward press conference at the Four Seasons, except it was a landscaping location instead of the hotel. So many memories!

Well, things are looking bad again for Giuliani and it’s all because of his false claims about the election and Trump’s loss to President Joe Biden. His misleading statements are having serious repercussions on his law career. Here’s what’s up.

Rudy Giuliani has been suspended from practicing law in Washington, D.C. 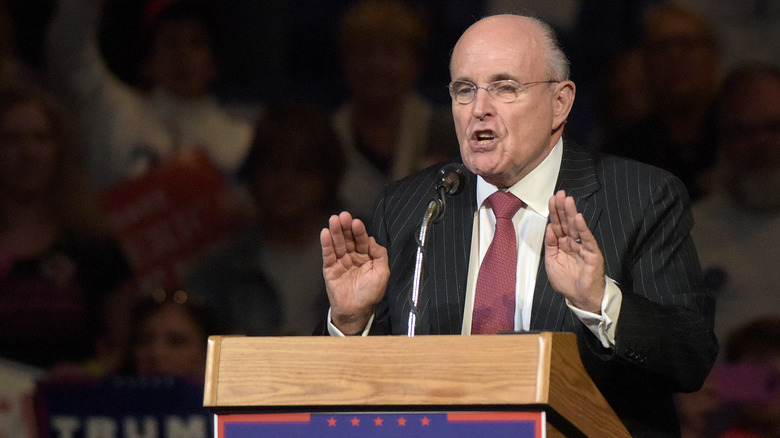 Rudy Giuliani and former President Donald Trump were busy spreading false reports that Trump was robbed of the election by claiming ballot fraud in several states since November 2020. Now Giuliani is facing the consequences. On June 25, Giuliani’s license to practice law in New York was suspended, according to CNBC. The suspension is temporary and depends upon the results of a “full formal disciplinary hearing.”

According to CNN, the New York court said that “there is uncontroverted evidence” that Giuliani “communicated demonstrably false and misleading statements to courts, lawmakers and the public at large in his capacity as lawyer for former President Donald J. Trump and the Trump campaign in connection with Trump’s failed effort at reelection in 2020.” Not only that, but Giuliani’s “conduct immediately threatens the public interest and warrants interim suspension from the practice of law,” the court said.

This wasn’t all. On July 7, Giuliani was suspended from practicing law in Washington, per the District of Columbia’s highest court. The decision depends upon the “disciplinary proceeding in New York.” CNN calls the suspension a “major blow” to the attorney.

Taylor Swift Shuts Down a Question About Settling Down at 30

Gwyneth Paltrow goes glam at Baby2Baby Gala, despite being ‘so ill’ ahead of the event