The Duke and Duchess of Cambridge had front row seats for the Platinum Party at the Palace celebrations outside Buckingham Palace on Saturday evening, and now they have revealed what they really thought of the show.

PLATINUM JUBILEE: Highlights from the Queen’s Platinum Party at the Palace

Prince William and Kate, who sat in the royal box for the show alongside their eldest children, Prince George and Princess Charlotte, shared their verdict of the special event in a post on their Instagram Stories on Saturday night.

WATCH: See highlights from Platinum Party at the Palace

Sharing an aerial photo of crowds lining the mall as Buckingham Palace was lit up with the Union Jack flag, the pair wrote: “What. A. Show. #PlatinumJubilee.”

They also posted a clip of drones in the sky above the palace designed to look like a corgi with a bone, and wrote: “How amazing was this!” 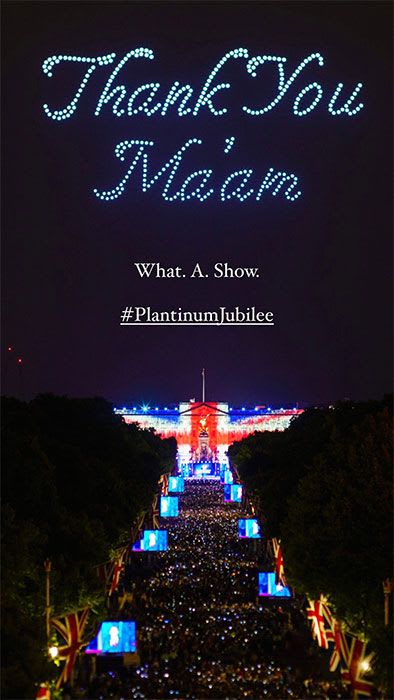 Prince William and Kate shared a clip of highlights from the event on their Instagram feed, which showed them taking their seats in the royal box, the Duke going up on stage to give his speech, and photos and video clips from the three-hour concert.

“What. A. Show. Tonight’s #PlatinumJubilee Party at the Palace was a fitting and fabulous tribute to Her Majesty. Well done to everyone involved!” it was captioned.

The Cambridges certainly looked to be enjoying the concert, which featured performances from the likes of Queen and Adam Lambert, Sir Elton John and Alicia Keys.

While Prince George and Prince William were seen waving flags and singing along to Sir Rod Stewart’s rendition of Sweet Caroline, Princess Charlotte and her mum were also seen sharing an adorable duet as Diana Ross closed the show at the end of the night.

The family have played a key role in the Queen’s Platinum Jubilee celebrations over the last four days; as well as attending Trooping the Colour and joining the Queen for a balcony appearance at Buckingham Palace on Thursday, they also carried out an engagement in Cardiff earlier on Saturday, which marked Prince George and Princess Charlotte’s first official visit to Wales.

On Friday, Prince William and Kate also attended a special service of thanksgiving for the Queen at St Paul’s Cathedral alongside royals including Prince Charles and the Duchess of Cornwall, the Earl and Countess of Wessex, and Prince Harry and Meghan Markle.

Make sure you never miss a ROYAL story! Sign up to our newsletter to get all of our celebrity and royal news delivered directly to your inbox.