Home » Celebrities » Obama Congratulations Biden and Harris: 'I Could Not Be Prouder'

“I know he’ll do the job with the best interests of every American at heart, whether or not he had their vote,” the former president writes 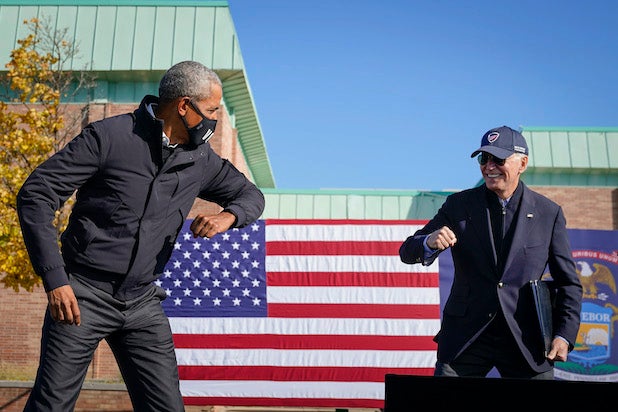 “Congratulations to my friends, @JoeBiden and @KamalaHarris — our next President and Vice President of the United States,” the former president wrote, sharing a statement on Twitter.

Obama addressed the great divide in the country at the moment but urged those of opposing views to find common ground. And he said that Biden is the person who has “what it takes” to take on those differences, along with the raging pandemic.

“I know he’ll do the job with the best interests of every American at heart, whether or not he had their vote,” Obama wrote. “So I encourage every American to give him a chance and lend him your support.

“The election results at every level show that the country remains deeply and bitterly divided. It will be up to not just Joe and Kamala, but each of us, to do our part – to reach out beyond our comfort zone, to listen to others, to lower the temperature and find some common ground from which to move forward, all of us remembering that we are one nation, under God.”

You can read Obama’s complete statement by clicking here.

Obama’s successor, Republican President Donald Trump, did not accept the projected results of the election on Saturday morning.

“Beginning Monday, our campaign will start prosecuting our case in court to ensure election laws are fully upheld and the rightful winner is seated. The American People are entitled to an honest election: that means counting all legal ballots, and not counting any illegal ballots,” he said in a statement.

How Jill Zarin Created An Empire With This Pandemic Business