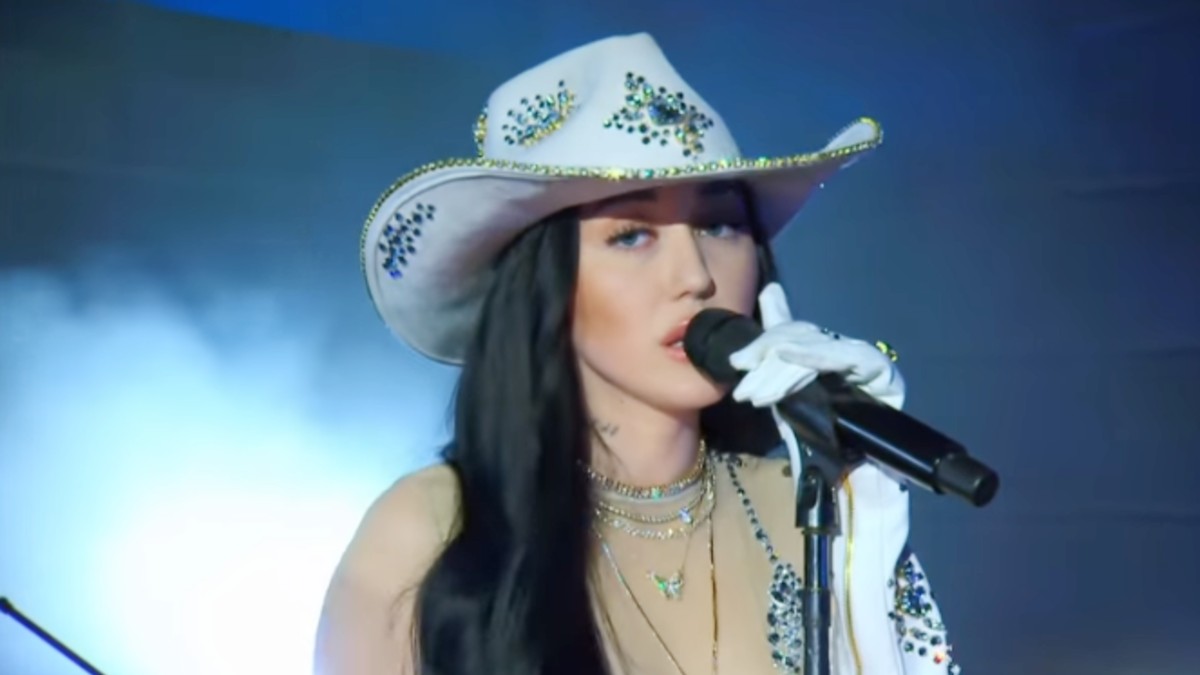 Singer Noah Cyrus stole the show and polarized fans when she appeared on stage in a very racy bodysuit outfit at last night’s CMT Awards.

Cyrus appeared on stage in Nashville with Jimmie Allen to perform their hit song, This Is Us. Allen started off the performance but was joined moments later by Cyrus, who sauntered on stage as if she owned it!

The 20-year-old was blinged up to the max in a glittery nude color bodysuit.

Her private parts were covered by sparkling jewels, which were shaped like a bikini. And she accessorized with a white glittering cowboy hat, matching gloves that went past the elbows, and knee-high boots.

Jimmie’s outfit was pretty darn impressive too, and sparkly.

He had a long glittering silver coat with black epaulets, black leather pants, and a t-shirt with a skull.

It was a cool outfit, but unfortunately for Jimmie, no one cared once Noah had walked on stage. You can hear the song and see the outfits in the video below.

Noah arrived at the event earlier in the evening in a rather less exuberant outfit, but no less cool. She wore head to toe denim over an orange crop top with a denim cowboy hat. 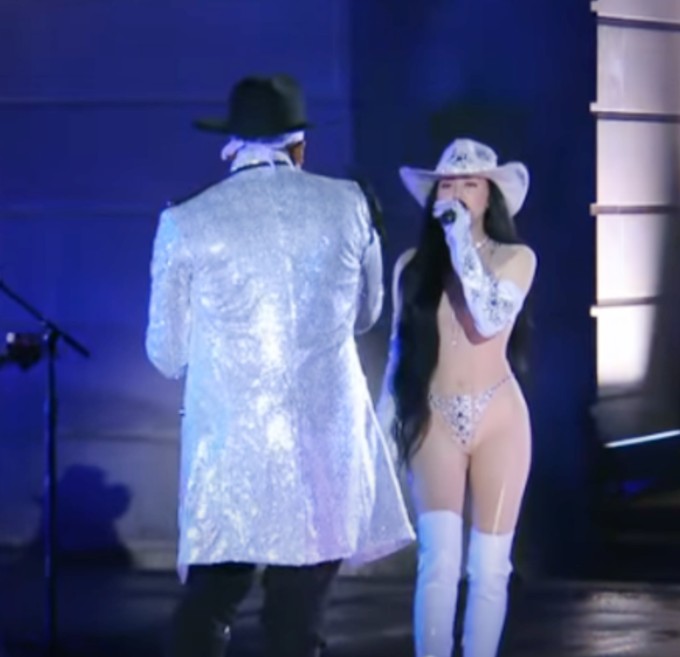 Some fans really loved her risque stage outfit; one fan wrote on Twitter that “I’m in love with Noah Cyrus this outfit is EVERYTHING.”

Cyrus posted a video of her performance to her Instagram, and in the comments, she was showered with praise for her looks.

Singer MLMA wrote in the comments: “So beautiful, 🥺💖” and other fans responding with several on-fire emojis and red hearts.

However, not everyone was impressed with Noah’s outfit.

In one exchange on Twitter, a fan told the singer, “this is the country music awards. Put some clothes on.”

Another fan responded, “Right, I was appalled! If you want to follow your sister, please go to pop. The country stage has class.” 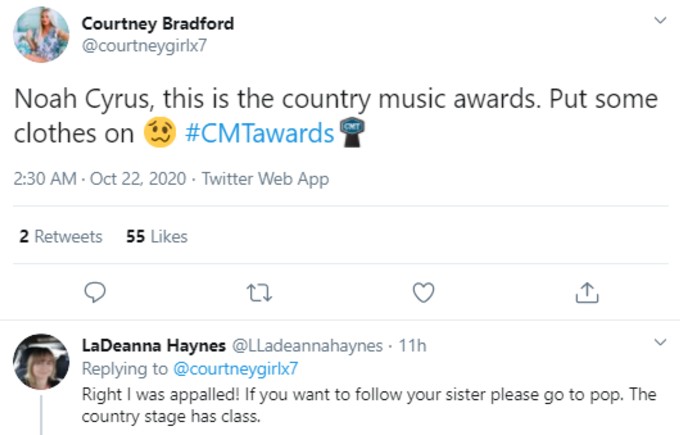 Another CMT fan wondered what had happened to the rest of her clothes.

They wrote: “What happened to the rest of her clothing? I know there is freedom of expression, but oh me. That was really revealing…even with a flesh tone bodysuit.”

Another fan agreed and stated they thought it was disgusting and put a throwing-up emoji at the end of their tweet.

As you can see, nobody will agree on the merits of Noah’s outfit anytime soon.

The Cyrus family are no strangers to controversy regarding the wardrobe. Noah’s big sis Miley has made the headlines multiple times for various fashion faux pas and wardrobe malfunction.

Back in February, Miley posted a pic of one particular malfunction on her Instagram; she joked with fans, “swipe right, but hurry.”

Speaking of Miley, she and her boyfriend, Cody Simpson, lightened the mood in July when they performed a perfectly in-sync and adorable dance routine on TikTok.