Home » Celebrities » Meghan & Harry: Escaping The Palace’s Producers On Whether They’ve Had Any Pushback From The Royal Family – Exclusive

Lifetime recently released the third installment in its “Harry & Meghan” series, and viewers have likely enjoyed devouring all the royal drama. “Harry & Meghan: Escaping The Palace” follows Prince Harry and Meghan Markle’s decision to step down as senior members of the royal family, their move to Los Angeles, and their interview with Oprah Winfrey. And while much of Harry and Meghan’s journey has played out in the public eye, the movie imagines some of the behind-the-scenes conversations that might have taken place. In particular, Prince Harry’s feud with his brother, Prince William, takes center stage in “Harry & Meghan: Escaping the Palace,” with William dedicated to royal duty and upholding the monarchy.

Executive producers Merideth Finn and Michele Weiss have become avid followers of the royal family while working on Lifetime’s “Harry & Meghan” series, and they realize that viewers will likely be picking sides when it comes to Harry and William. As Finn told Nicki Swift, “The Americans see it one way, and certain British people will see it another way. And that’s one of the fun things.” Weiss confirmed, “And we’re prepared for it.”

Nicki Swift sat down with Finn and Weiss to find out whether the real royal family had any feedback for them regarding “Harry & Meghan: Escaping the Palace.”

'Meghan & Harry's' producers know who the real villain is 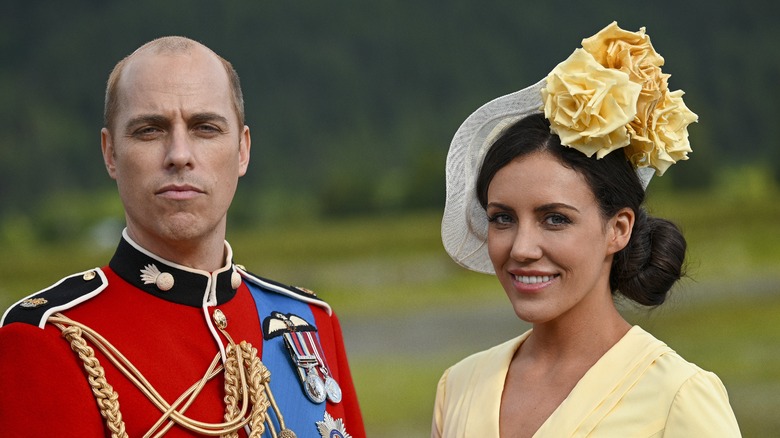 Prince Harry’s relationship with Prince William has regularly been written about in the press, and Lifetime’s “Harry & Meghan: Escaping the Palace” attempts to delve into what really happened between the once inseparable brothers. But rather than picking a side, the movie’s producers hope to show a balanced account of why each prince made the choices they did. “It’s interesting. Our goal was to try to present both sides,” executive producer Michele Weiss told Nicki Swift. “Two people with different roles to play, and different histories. And we’re empathetic to the position that William is in. He is the one who’s carrying the weight of monarchy on his shoulders. And he’s had a role to play his whole life, and he doesn’t have a choice in that role, really.”

“Obviously it’s a drama, you want to see the conflict, but we did try to show both sides,” Weiss continued. “William needs to protect the monarchy and we need to protect our family, and it can pit them against each other — or their purposes against each other. But we’re fans of Will as well.” Executive producer Merideth Finn concurred, saying, “I would agree that we don’t see him as a villain, if there is a villain. And in every good movie there’s conflict, so we really saw the villains as the press, and as the Firm … The machine.”

“Harry & Meghan: Escaping the Palace” is available to watch on Lifetime.

The Sussexes are ‘heeding government advice’ during the coronavirus pandemic