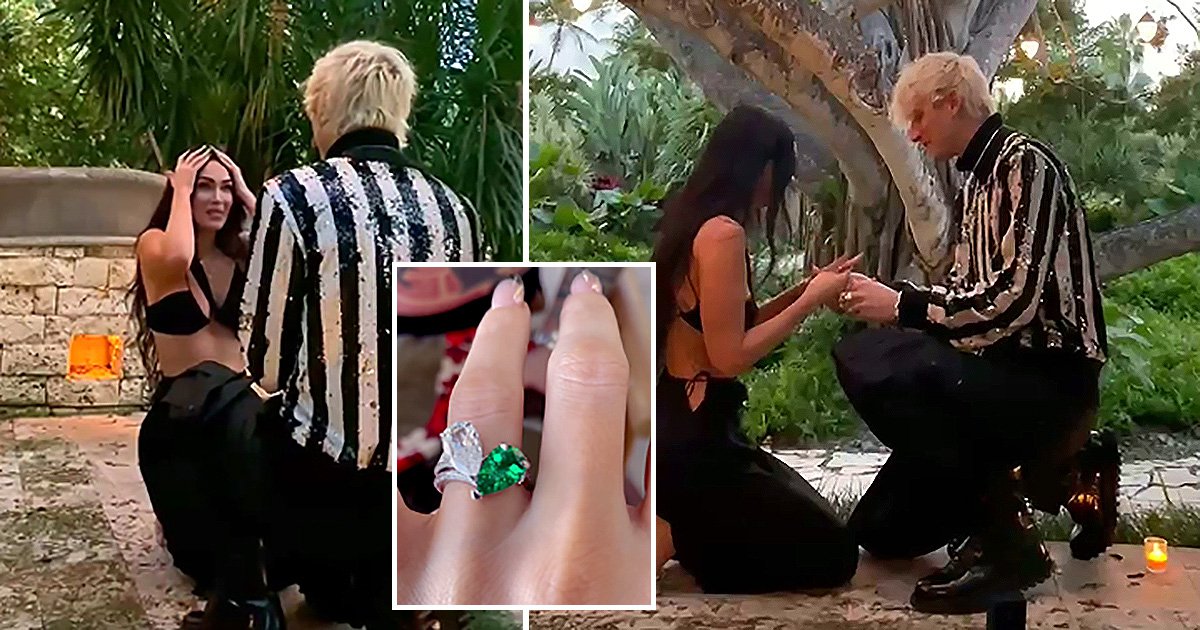 Megan Fox and Machine Gun Kelly are engaged, with the actress sharing an emotional video of her fiance popping the question.

The Jennifer’s Body star posted a clip of MGK getting down on one knee, penning a heartfelt message – and saying they ‘drank each other’s blood’ as part of the proposal (as you do).

She wrote on Instagram: ‘In July of 2020 we sat under this banyan tree. We asked for magic.

‘We were oblivious to the pain we would face together in such a short, frenetic period of time.

‘Unaware of the work and sacrifices the relationship would require from us but intoxicated off of the love. And the karma.

‘Somehow a year and a half later, having walked through hell together, and having laughed more than I ever imagined possible, he asked me to marry him.

‘“Yes, in this life and every life” 💍,’ he wrote. ‘Beneath the same branches we fell in love under, i brought her back to ask her to marry me.

‘I know tradition is one ring, but i designed it with Stephen Webster to be two: the emerald (her birth stone) and the diamond (my birth stone) set on two magnetic bands of thorns that draw together as two halves of the same soul forming the obscure heart that is our love. 1-11-2022 ✨.’

They were spotted spending time together in May that year, Megan’s ex-husband Brian Austin Green confirming that they had split after 10 years of marriage.

In June, the pair’s romance was confirmed as they were spotted sharing a kiss, and in July they made things Instagram official.

Meanwhile, the couple lifted the lid on their relationship in October last year during an interview with GQ.

Megan explained: ‘I was definitely open [to] love, but I did not anticipate walking right into my soulmate like that.

‘I was obviously over the way I had been living, and those paths lined up, those doors opened. It was [as if] all the obstacles that had kept us apart all those years [had been removed] and we were able to finally intersect.’

MGK, whose real name is Colson Baker, told the publication: ‘I came from broken homes and I watched love never work. Then I grew up where in pop culture they don’t even make romantic movies any more. It hurts my soul that I wasted 30 years of my life not having any desire.’