Home » Celebrities » Katy Perry & Taylor Swift Are FINALLY At ‘Peace’ With Each Other!

There is officially no Bad Blood between Taylor Swift and Katy Perry!

On Tuesday on Instagram, it appears the Shake It Off musician gifted her former nemesis a plate of delicious chocolate chip cookies with “Peace At Last” written in frosting!

Katy posted a pic of the yumminess with the caption: 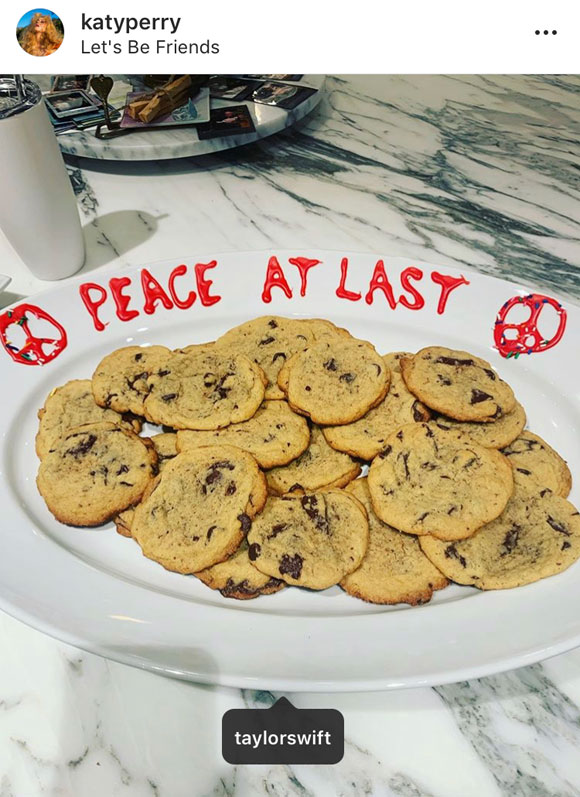 As we reported, fans noticed that the two pop stars have been acting suspiciously friendly towards each other.

Not only did Perry “like” a pic of Swift and her new cat Benjamin Button on Twitter, Taylor added Perry’s new song Never Really Over to her Apple Music playlist.

Additionally, on the iHeartRadio Music Awards red carpet in Los Angeles, Perry said she was “open” to making music with Swift.

Allegedly, the two began feuding after the American Idol judge stole dancers from the Reputation singer years ago.

In 2018, Katy sent Taylor a literal olive branch amid their drama.

According to an ET source that year, the Swish Swish musician sent the apology to prove that women should not be pitted against each other. The insider explained:

“Katy planned a very personal, sweet apology and took time to write a kind note in hopes Taylor would see how much she cared about putting this behind them… Katy told friends if Taylor didn’t accept this apology, she would keep trying because she is done holding on to the past and wants to be part of the change in today’s society. She wants to set a good example for women, so she planned to never give up, if that is what it took.”

At the time, Katy hoped “they finally can be supportive of each other’s music and maybe one day soon even hang out together again.” The source added:

“Katy realizes they need to take it one day at a time, but that this is a great start.”

Prior to sending the olive branch, Perry reportedly made several attempts to make amends with Swift.

“Katy and Taylor’s years of cruel comments about one another in their interviews, their shots at each other on their social media and their full-blown attacks in their music videos, continued to show their one goal — revenge… In the beginning, both Katy and Taylor were to blame for their digs at one another, but Katy has been trying to make amends for some time. Each attempt by Katy to apologize or show Taylor respect went either unnoticed or worse, ignored.”

The feud is over, y’all!