The Duchess of Cambridge was kept on her toes by her youngest child, Prince Louis, at Sunday’s Platinum Jubilee Pageant.

As boisterous Louis pulled faces and ran up and down the Royal Box, choosing to sit with Prince William and then Prince Charles instead of taking his own seat, Kate tried all her trusty parenting techniques to keep the little boy in check.

She was seen trying to calmly talk to her son and keep him entertained, pointing out everything that was happening at the pageant as it passed Buckingham Palace.

At one point, Kate showed four-year-old Louis – who was turning around in his seat and playing with his cousin Mia Tindall – the Teletubbies float as it approached. Louis’ face visibly lit up and he was seen obediently sitting in his chair as he watched it go past.

Naturally, it wasn’t all plain sailing at the pageant, as Louis did show his cheeky side, sticking his tongue out at mum Kate and even putting his hand over her mouth when she tried to tell him off. He also refused to take his thumb out of his mouth when Kate asked him to.

Louis showed off his cheeky side at the pageant

There were some sweet moments between the mother-son pair though, as, at another point, Louis cuddled up to his mum and leant his head on her shoulder.

William and Kate, who also share Prince George, eight, and Princess Charlotte, seven, made reference to Louis’ hilarious antics in an Instagram post shared after the Jubilee weekend. 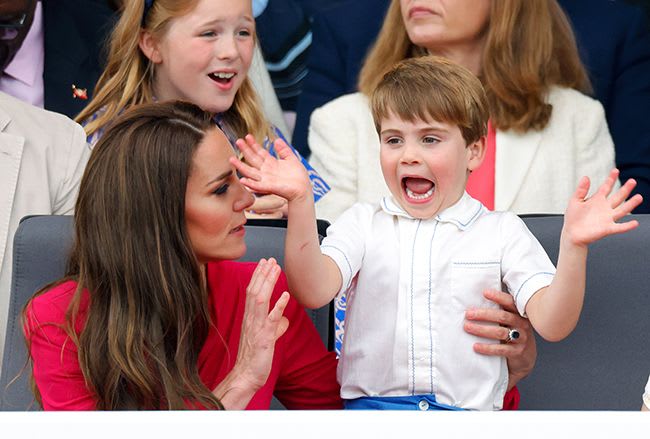 Alongside a series of photos from the festivities, they wrote: “What a fantastic weekend of celebrations. Seeing people across the nation coming together with family, friends and loved ones has been extremely special.

“Thank you to everyone who turned out to show their gratitude to The Queen and her inspiring 70 years of leadership. From the crowds on the Mall to communities hosting street parties up and down the country, we hope you had a weekend to remember.”

Referring to little Louis, William and Kate ended their personal message with: “We all had an incredible time, especially Louis… [eyes emoji]. W & C.”

Make sure you never miss a ROYAL story! Sign up to our newsletter to get all of our celebrity and royal news delivered directly to your inbox.

This is how much Bella Hadid is actually worth