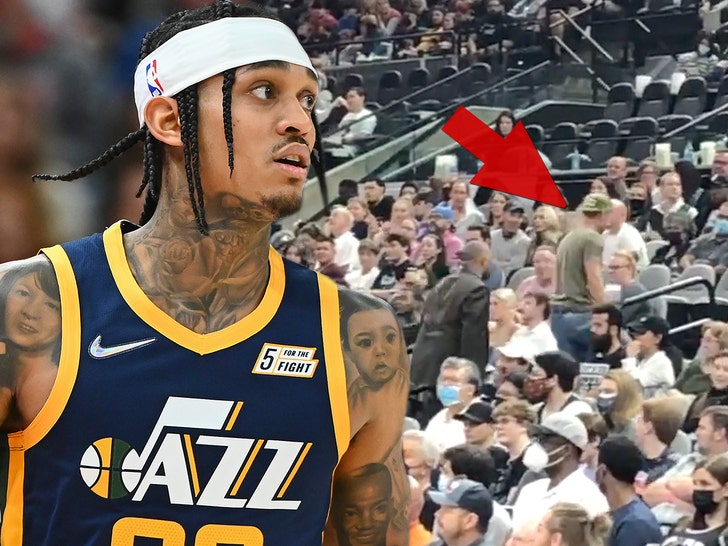 NBA star Jordan Clarkson was so pissed off over a fan’s heckling on Monday … he attempted to go after the man in the stands, but fortunately, he was held back by his teammates.

The Jazz guard’s drama with the fan happened during Utah’s game with the Spurs in San Antonio … when Clarkson clearly had enough of a fan’s ribbing.

According to journalist Raul Dominguez Jr., as Clarkson was headed toward his bench during a timeout … a fan stood up and had words with the basketball player.

Thankfully, Clarkson’s teammates and security stepped in before things turned ugly … and ultimately, the fan was ejected from the arena.

After the game, Clarkson told reporters the fan had absolutely crossed the line with his trash talk — saying the dude’s comments were straight-up “malicious.”

“The guy just keeps antagonizing me, like almost challenges me, like, ‘What you going to do?'” Clarkson said. “Fans got to learn, we human. We people too.”

The 29-year-old said he often has playful banter with courtside supporters during his games … but he said to media members this exchange was very different.

Clarkson said he didn’t press the issue further, explaining a potential fine and a possible suspension deterred him from escalating things.

As for the on-the-court action, Clarkson’s Jazz ended up getting the last laugh on the Spurs … beating San Antonio, 110-104.

11 Animal Zoom Backgrounds That Will Liven Up Your Remote Meetings

Bill Maher Says the Young, the Woke and Kevin Hart Suffer From "Progress-o-phobia"

Emma Stone Shows Off Engagement Ring During Trip to Athens