Home » Celebrities » Joe Jonas Heads Out For A Solo Stroll With Daughter Willa, 3 Months, & Shows Off His Buzzcut

Joe Jonas was spotted taking his daughter Willa out for a walk in her stroller in their L.A. neighborhood and debuted his brand new buzz haircut after dying his locks pink for Breast Cancer Awareness Month in Oct.

Joe Jonas, 31, took in some fresh air with his three-month-old daughter Willa on Nov. 6, when they went for a stroll in their Los Angeles neighborhood, and he showed of another new hair makeover! The singer, who was solo and without his wife Sophie Turner, 24, during the outing, had a buzzcut that was quite different from the pink locks he was sporting in Oct. in honor of Breast Cancer Awareness Month. He also wore a white T-shirt that read, “My mom said i can sleep over”, black shorts, and a blue tie-dye face mask as he pushed his baby girl’s stroller in the cool weather. 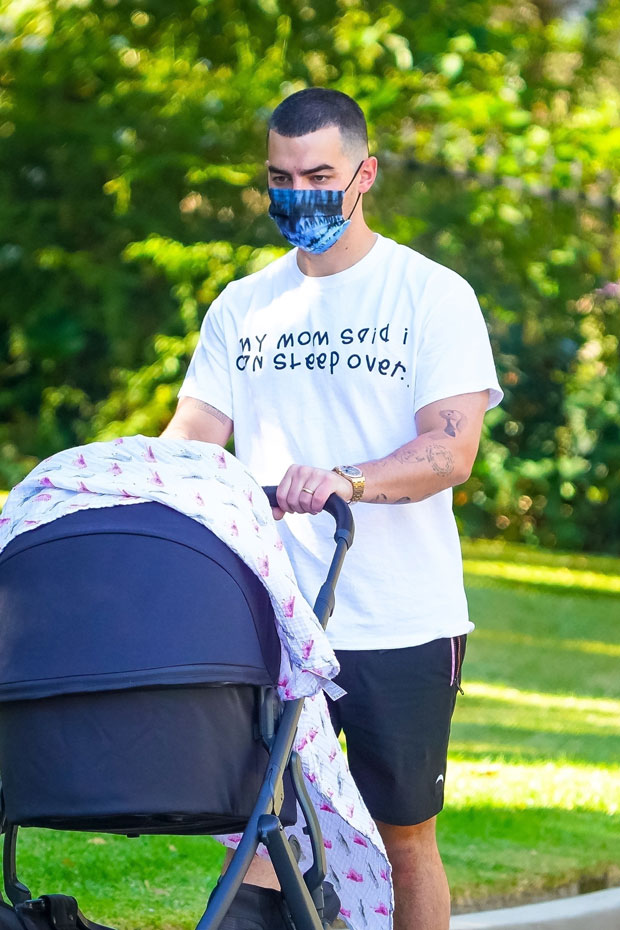 The latest walk comes a few weeks after he and Sophie were spotted taking Willa for a different walk. He had his blondish-pinkish hair then and the happy lovebirds were both wearing comfortable attire that consisted of sweatshirts and pants. They also wore face masks and looked natural in their role of new parents. 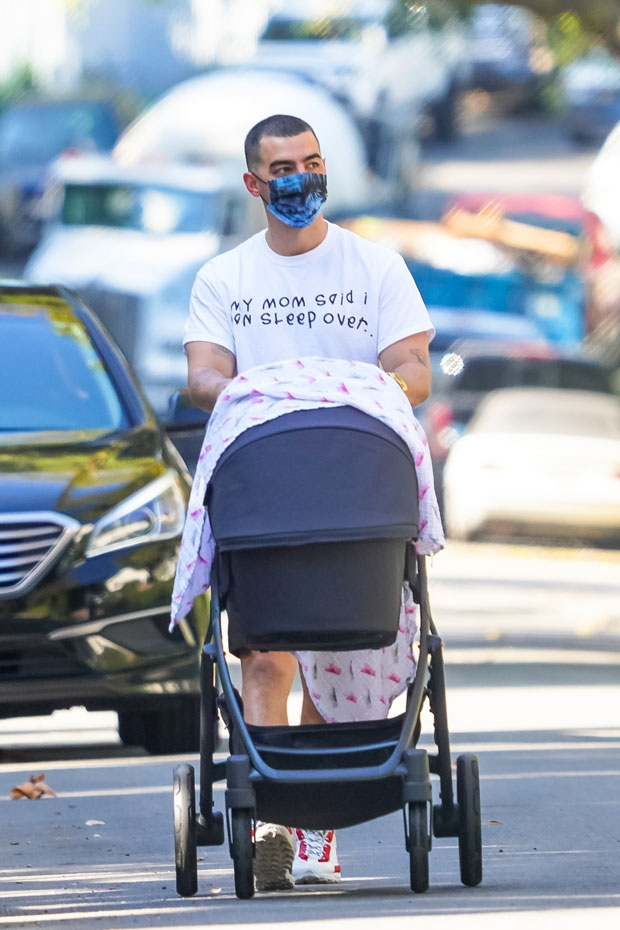 Although Joe and Sophie have yet to share photos of Willa’s face with the public, the young stars have been seen out and about on walks with her on many occasions since her birth in July. They always have a blanket covering her face and haven’t picked her up in front of cameras. They did a great job at keeping their lives private throughout Sophie’s pregnancy and it seems even now, they want to protect their new addition as much as they can.

When they’re not busy attending to their little one, Joe and Sophie have stayed active on social media. Joe has posted more than the Game of Thrones star but she did throw some shade to President Donald Trump during the Oct. 22 presidential debate. “He called Europe a ‘country’,” she wrote along with a funny close-up photo of her face on her Instagram story.

She also made headlines earlier in the month for imitating a Kylie Jenner scene on Keeping Up with the Kardashians when she sang the words, “I’m going to get wasted” in a TikTok video Joe shared. The Jonas brother appeared to be eating ice cream in the clip as the blonde beauty held a bottle of water and it was definitely a hit with fans. It’s great to see them taking the time to have fun online while in the midst of their new parental bliss!