And with that, the United States has been saved from four more years of Donald Trump. Democratic nominee Joe Biden has officially been declared the winner of the 2020 general election, and will become the 46th President of the United States. At 78 years old, Biden is the oldest person to assume the presidency in United States, and has broken the record for most votes ever cast for a presidential candidate in US history.

It was a nail-biting race, with vote counting lasting days in major swing states. As the hours progressed, Biden closed the gap on Trump in Pennsylvania amid calls by the president to “stop counting” votes. Without Pennsylvania, Biden still had a valid route to election by winning Nevada and Arizona. On Election Night, November 3, Biden assuaged voters’ fears about the presidential race thus far, and thanked them for their “patience” while awaiting the final results.

“We knew this was going to go long,” Biden said, noting that the race would drag into November 4 or beyond. “We feel good about where we are. We really do.” He said he felt “confident” about winning Pennsylvania and Wisconsin, and noted that “it ain’t over until every vote is counted, until every ballot is counted. I’m here to tell you tonight we believe we’re on track to win this election. I’m optimistic about this outcome.” He reiterated these points in speeches on November 4 and 5, asking his supporters to “remain calm” amid the anxiety-inducing vote count.

The road to the presidency wasn’t without bumps. Biden endured months of name-calling and assaults on his character from the Trump camp. Detractors attempted to perpetuate a story that “Sleepy Joe” was an incompetent old man on the verge of dementia — despite being just four years older than the current president. His son, Hunter Biden, 50, was the target of a failed scandal when Trump called out his business dealings in Ukraine while under scrutiny for his quid pro quo call with the nation’s president. 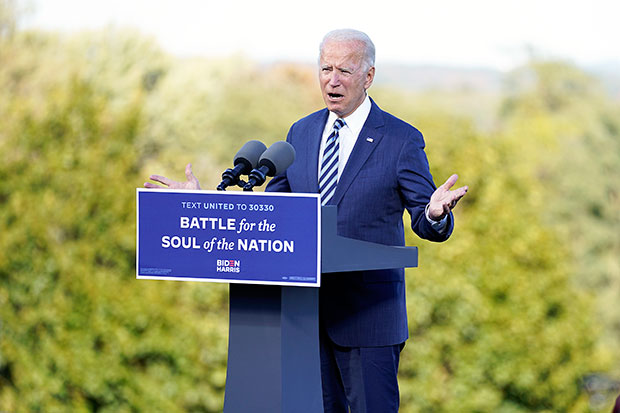 Biden started out as one of 20 Democratic candidates vying for the presidency in 2019, ultimately becoming the last one standing around March 2020, when Senator Bernie Sanders dropped out of the race. He named one of his former opponents, Senator Kamala Harris, his running mate in August ahead of the Democratic National Convention. And with that, Biden’s victory also comes with a historic first. Harris is now the first female vice president in United States history, as well as the first Black and Asian-American person to assume the office. Harris accepted the outcome of the 2020 election with a speech of her own.

Trump, true to his word, isn’t going down without a fight. As he threatened in the weeks leading up to the election, the president has declared that the election results are fraudulent, and has demanded a recount. Whether or not that will be granted is still to be determined. He sowed the seeds of distrust during a 2:00am speech on Election Night, telling supporters at the White House that he felt that he already won, and would instruct the Supreme Court to “stop counting votes.” He had no authority to do so, and despite this, continued to insist without evidence that widespread voter fraud was occurring for days.

Sean Spicer talks what’s next for him after ‘DWTS,’ addresses daytime TV rumors

Southern Charm’s Leva Bonaparte: Craig Conover May Have Found ‘The One’