Jennifer Lopez and Ben Affleck are back from their romantic Italian honeymoon.

The pair were seen getting off their private jet in Los Angeles today, following several days touring Italy, during which they briefly visited friend and fellow actor George Clooney’s Lake Como home.

Lopez and Affleck coordinated in neutral-toned looks for their return home. The Marry Me star wore a beige, white, and glittery gray zip-up sweatshirt with matching sweatpants and chunky white sneakers, and carried a white hat and black croc-embossed Hermès Birkin. She wore her signature rose-tinted aviator sunglasses, and as she exited the plane, an assistant carried her classic brown Louis Vuitton duffel bag in the LV monogram.

Affleck, meanwhile, looked casual yet sophisticated in a beige blazer with brown buttons, which he wore over a collared sweatshirt in the same hue, gray sweatpants, and white sneakers. 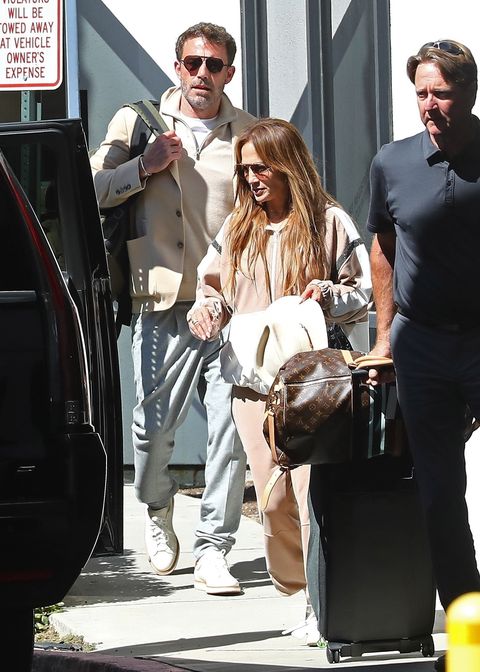 Last week, Lopez and Affleck were photographed showing off their love all over Italy. In one instance, they were seen kissing in front of Lake Como, with the singer looking radiant in a yellow sundress. They were then seen on a shopping trip in Milan, for which Lopez wore an all-white ensemble and carried a Christian Louboutin tote from the fashion house’s Greekaba collection. Days later, they were spotted holding hands after grabbing lunch in Lake Como in coordinating cream-colored looks.

The dreamy trip came after the pair’s lavish wedding at Affleck’s estate in Riceboro, Georgia, a three-day affair that in itself followed their surprise midnight ceremony in Las Vegas.