Best known for his role in “Spy Kids” as Machete and, later, the films of that same name, Danny Trejo is both a gruff action star and a beloved actor. He’s currently celebrating both the release of his book and his addition into the “American Horror Stories” cast. According to Entertainment Weekly, Trejo will join such other celebrities as Billie Lourd (daughter of the late Carrie Fisher), Matt Bomer, and Paris Jackson. The series has teased that Trejo is playing Santa in his episode.

But while his introduction into the world of “American Horror Story” may be a strange one, it’s far from the strangest interaction that Trejo has ever had since he started on his Hollywood journey. In his new memoir, Trejo talks about the strangest encounter he’d ever had with someone famous — and, in this case, someone infamous. In a scene that would be appropriate for “American Horror Story,” Trejo came across none other than notorious serial killer Charles Manson in his travels as a teenager.

Let’s take a look at the trippy details of how these two crossed paths. 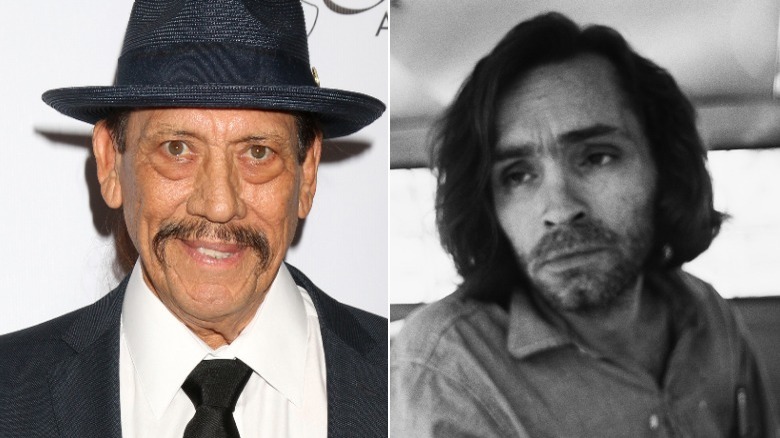 This section contains mentions of drug use.

It’s no secret that Danny Trejo had a rough upbringing — one that eventually landed him in jail. And at on one such trip to the Los Angeles County jail, Trejo remarked that he and Charles Manson actually spent time together. In 1961, Trejo and Manson both ended up in jail at the same time, where the future cult leader hypnotized Trejo. The actor describes the incident in his memoir “Trejo,” writing that Manson was “greasy, dirty, scrawny” and “so poor, he didn’t have a belt, and instead used a piece of string to keep his pants up.”

“If that white boy wasn’t a career criminal, he could have been a professional hypnotist, someone who went to high schools and state fairs and got people to come onstage and act like cats and stuff,” Trejo wrote (via HuffPost). “But he was, in fact, a career criminal. He was Charles Manson.” He then described how Manson was so realistic about his description of shooting up heroin that Trejo felt he could taste it in his mouth. “Any junkie knows what that is like. By the time he described it hitting my bloodstream, I felt the warmth flowing through my body,” he recalled. Lucky for Trejo, that seems to be the end of his run-ins with the convicted murderer.

Why Eddie Murphy Plans to Leave Acting Behind Soon