Home » Celebrities » In 10 years, Rihanna has rebuilt herself and created an empire

In June 2009, rapper Chris Brown plead guilty to the violent assault of his then girlfriend, singer Rihanna.

Before #MeToo or #TimesUp, pictures captured by paparazzi of the couple in their car showed a then 21-year-old Rihanna with a heavily bruised face moments after the assault. The photos were then plastered across TV news broadcasts, tabloid magazines and the internet. 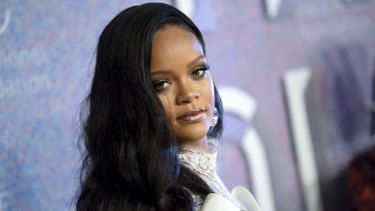 Rihanna has been named the world’s richest female musician.Credit:AP

Almost 10 years later, Forbes magazine this week named Rihanna as the world's richest female musician. The Barbados-born singer has a fortune of $US600 million ($861 million), Forbes estimates, placing her ahead of Madonna ($817 million) and Celine Dion ($645 million). Although a 2005 Guardian profile early in Rihanna's career dubbed her the "Bajan Beyonce", she now well and truly outearns her: Queen Bey came in fourth on the list with an estimated wealth of $574 million (tied with Barbra Streisand).

The Rihanna of today does not speak about her relationship with Brown. She told Vanity Fair in 2015  she felt she was being "punished over and over" in media interviews; continually forced to address the assault as she released new music and moved on with her life.

"For me, and anyone who's been a victim of domestic abuse, nobody wants to even remember it. Nobody even wants to admit it," she told Vanity Fair in 2015.

If there is one lesson we can learn from 2019 Rihanna – the artist, the designer, the brand – it is the power of reinvention. And, although she has built a new generation of fans who genuinely might not even know who Chris Brown is (seriously, her younger devotees wouldn't know him from a scungy bar of prison cell soap), her personal life is not the most significant part of that.

But, of course, Rihanna's reinvention – and fortune – has largely occurred outside of music.

The bulk of her coin is from Fenty Beauty, the cosmetics brand she launched with luxury goods conglomerate LVMH 2017. Attracting attention for catering to women of diverse skin shades (the foundation comes in 40 colours), the brand is now available in more than 150 countries.

Like most of Rihanna's success, it didn't come out of nowhere: her four fragrances, released in the early 2010s, all sold well and in 2015 she co-founded an agency for make-up artists and stylists looking for artist clients.

Unlike some other celebrities touted by Forbes as "self-made" (Kylie Jenner's status as the world's youngest self-made billionaire, previously decreed by the magazine, is perhaps mathematically correct, although, given her considerable start on her wealthy family's reality show, demographically less so), growing up in Bridgetown with an accountant mother and warehouse supervisor father, Rihanna actually is.

Yet something should be said about how far Rihanna has come.

Slowly but surely, over the past 10 years, the woman has built an empire. And, as she instructed in her 2016 single, she did it through "work".