Home » Celebrities » How Women in Entertainment Can Find Mentors (Video)

”Always (make) sure that you have a group of people around you that care for you that may play different roles in your life.“ kweliTV CEO De Shuna Spencer says 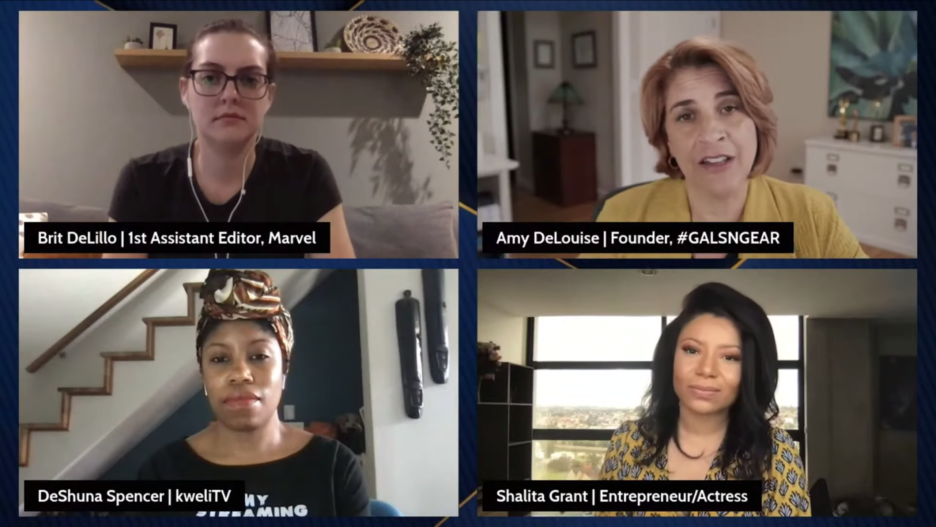 A group of female leaders in media and entertainment addressed the challenges for women breaking into the industry — and the need to find mentors along the way.

At an online panel moderated by #GALSNGEAR founder Amy DeLouise and presented by NABShow, “NCIS: New Orleans” and “You” star Shalita Grant said that she felt lost as she was launching a natural-hair business and realized that she needed a business coach as she approached a pre-launch of her product. “This man has really helped me put my finger on my imposter syndrome,” Grant said — referring to the feeling of self-doubt that many successful women have despite their accomplishments.

KweliTV CEO DeShuna Spencer said just reaching out to other people helped her to find mentors, whether it was at networking events or through LinkedIn messages. “You’re not asking them to be your mentors from day one,” said Spencer, whose platform has found more than 430 filmmakers globally with a focus on Black stories. “You’re just starting the conversation. Those have been the more fruitful mentorships. It just started organically almost like dating … and then all of a sudden they’re giving you this really great insight.”

Sometimes the person you approach is not the best fit, Spencer added, but their friend or colleague could serve as a better mentor. Having started as a radio journalist, Spencer said she started out being her own mentor when trying to transition into the film business — and definitely could relate to feeling imposter syndrome when starting out. “The right people will make the right connections,” she said. “Always (make) sure that you have a group of people around you that care for you that may play different roles in your life.”

For Brit DeLillo, first assistant editor at Marvel, having a mentor enabled her to take ownership and try things on her own. Even as an assistant, she felt empowered by her mentor and got to work on edits on her own, for example, which helped her build more confidence in her career.

Now she has taken her experience as a mentee to give back to others just starting out. “I’m trying to be as open a book as possible, especially for women,” she said. “Breaking into this industry was one of the hardest things I ever had to do, so if I can be that extra cheerleader in somebody’s court I am 100% going to do it.”

Watch the video above.

Here’s What Gayle King’s Net Worth Is