Perfect for toting to holiday gatherings this season, Giada De Laurentiis‘ Mini Pineapple Cakes are fun and easy to make for even beginner bakers. Here’s how to make the Food Network host’s five-star dessert.

De Laurentiis uses fresh pineapple in her recipe but canned is fine, too

While the chef’s recipe calls for a chopped three-pound pineapple, she noted that a 20-ounce can of crushed pineapple works just fine as well. Be sure to drain and reserve the juice from the can for later in the recipe.

How to make the chef’s dessert

The crushed pineapple, whether you’ve poured it out of a can or crushed the fresh fruit in a food processor, is heated in a skillet until it’s “a little caramelized because it’s sort of an upside-down cake, so you want the bottom to be caramelized,” De Laurentiis says in the FN video for this recipe.

Two tablespoons of the unsalted butter and a half-cup of brown sugar are added to the pineapple: “Kind of gives it a smokier flavor. We’ll just cook it down, caramelize it, and evaporate all of the liquid, and get it nice and brown.”

While the pineapple cooks, the cake can get started. While it’s usually best to follow the instructions on the cake mix box, De Laurentiis asks that we stick with her departure from the back-of-the-box recipe for this one. First of all, she’s using only the egg whites from three eggs: “The reason I’m using just the whites is to get it a little bit fluffier,” the Everyday Italian host explained. 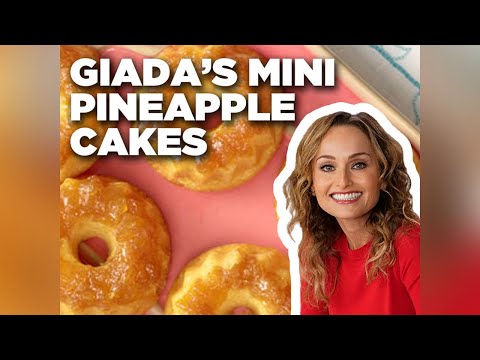 To the whites, she adds two-thirds cup of water, half of what the box mix calls for. “I’ve divided [the amount of water used] because the flavor of pineapple, I really want that flavor to come out, so I’m going to split it with half water, half pineapple juice,”‘ she said. The cake mix is stirred into the mixture (“I promise you nobody will even know it’s cake mix”) along with two-thirds of a cup each of vegetable oil and pineapple juice. Almond extract is added (“It perfumes the whole cake”) and it’s all mixed together.

At this point, the pineapple has cooked down to a bronzed, gorgeous, thick concoction that is spooned into each of six greased and floured mini Bundt pans. The cake mix then fills each of the Bundt pan wells. Bake in a preheated 325-degree F oven for about 25 minutes. Allow the cakes to cool completely before flipping them over and removing them from the pan. 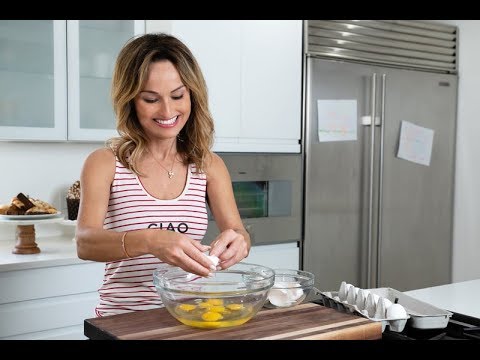 There’s something about moist, sunny pineapple cake that puts a smile on many faces. De Laurentiis’ fans were no different.

“Pineapple made the simple white cupcakes so wonderful. It was so sweet and I couldn’t stop reaching for them over and over again!,” one home cook said.

Another reviewer noted how flexible the recipe is, with an end result just as pretty as the original’s: “Since I’m a poor college student, I didn’t have bundt pans, so what I did instead was fill cupcake cups about a third, put in about a spoonful of the filling, and cover with more cake batter, then when they were all finished, I spooned more pineapple over the tops. This is a very adaptable recipe that turned out great for me!”