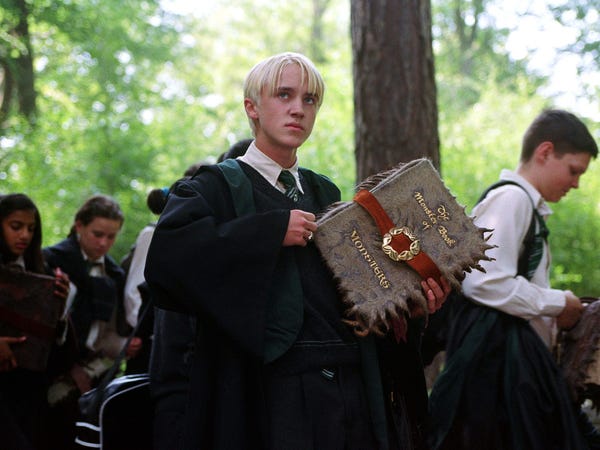 Draco Malfoy fans are calling for justice since they learned Tom Felton's character only had 31 and a half minutes of screen time during the entire "Harry Potter" movie saga.

One fan called Alex totaled up the time some of the main characters were on screen using the IMDB stats and shared it on Twitter.

"The fact Draco Malfoy was only in 31 minutes throughout the WHOLE of the Harry Potter franchise (19 hrs & 40 mins) jus doesn't sit right with me," they said.

Some fans can't handle the news and insist Malfoy would have had more character development if he'd been on screen more.

"Draco is definitely the best character," one fan tweeted. "In the end they cut the scene off where he ran back to Harry. Stupid mfs made him evil when he really could have had character development. THE PEOPLE DEMAND MORE SCREEN TIME FOR DRACO."

Others thought it was funny how much Harry Potter and his best friends Ron Weasley and Hermione Granger obsessed over Malfoy when they interacted with him so little.

"Draco Malfoy has main character energy," said one fan. "He lives in mine and Harry Potter's head rent free the whole series."

"Truly wild that Draco Malfoy only had 31 minutes of physical screen time yet had the entire series run time of the golden trio just THINKING about him," said another Twitter user. "Negatively, for sure, but he's still there. In the back of their mind. Literally just posted up, like he owned the damn place."

Felton's commitment to the role also didn't go unnoticed, with several fans noting that he bleached his hair to death during a decade of filming, only to be on screen for half an hour.

"Tom Felton also had to dye his hair for 10 years, to only end up with 30 minutes of screen time," one fan said. "He and Draco deserved better."

However, while Draco stans were up in arms, others used the new information to confirm what they already thought about Malfoy.

"When are you guys going to accept that he's a side character?" asked one Twitter user.

"Girl Harry himself refused to accept Draco was a side character," a Malfoy fan responded to the claims. "Anything with a mild whiff of nefariousness about it and Harry was certain it was the blond kid in the snake house."

There were also cries of injustice over other characters and their lack of screen time. Sirius Black and the Weasley twins, for example, were only in the movies for 20 minutes each. Dobby the house-elf had just 11 minutes 15 seconds in total.

On the other end of the spectrum, Harry, Ron, and Hermione were on screen for 539 minutes 15 seconds, 211 minutes 45 seconds, and 205 minutes respectively.

So despite being the main character, there are apparently 10 out of the 19 hours where Harry isn't even on screen.

Malfoy has been having a resurgence thanks to TikTok

Draco has been on a lot of fans' minds lately thanks to the popularity of DracoTok — people posting thirsty videos about the Slytherin wizard on TikTok.

Felton himself finally responded to the trend in September with a reaction video entitled: "POV: watching [Tom Felton] react to your #dracotok videos."

You can follow Felton's continuing adventures on TikTok here.