Dick Van Dyke and the Marvel Cinematic Universe are two entities that don’t appear to have anything in common, yet the legendary actor helped influence the vision for Disney+’s upcoming series “WandaVision.”

In the superhero series, Elizabeth Olsen’s Wanda Maximoff/Scarlet Witch and Paul Bettany’s Vision travel through the ’60s, ’70s, ’80s in sets and storylines inspired by “I Love Lucy,” “The Brady Bunch,” and “Family Ties.”

So who better to seek advice from than Van Dyke, whose ’60s sitcom “The Dick Van Dyke Show” is still revered.

Director Matt Shakman spoke to “Entertainment Tonight” about how he chatted with the comedy star, 95, over lunch at Disneyland.

“I mean, he is, I’m sure, an inspiration for so many people, but for me in particular, he had a huge impact on my life, and I think the same for Kevin Feige. So, the chance to sit down with him and pick his brain and kiss the ring, really, but also just try to soak up the secret sauce that has made so much of what he’s done but, in particular, ‘The Dick Van [Dyke] Show’ be this timeless classic. That was an utter joy,” he gushed.

Shakman said when he spoke to Van Dyke, the show was in pre-production but they had not started to shoot anything so the Emmy winner’s notes were very influential.

“A lot of the things that I took from that lunch really did affect how we approached especially our pilot episode, which is sort of an homage to ‘The Dick Van Dyke Show,’ as well as ‘I Love Lucy’ and some of the other sitcoms of that era,” he explained.

“We learned from Dick Van Dyke that their number one rule for how they approached anything was that if it couldn’t happen in real life, it can’t happen on the show,” Shakman added.

The director-producer admitted the hardest aspect of making the show was the tone. 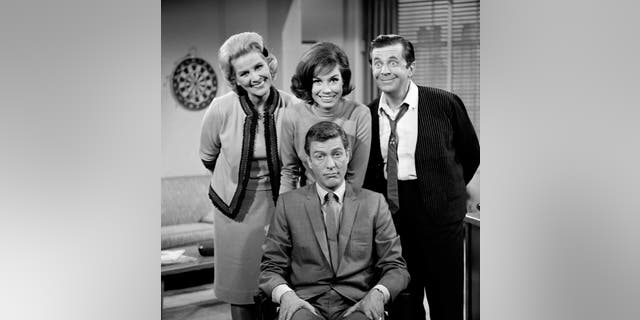 “We obviously had a big, ambitious story to tell, and I have to say, as a filmmaker, it was super exciting, because no day was like another day,” Shakman said.

What it’s like to be Dolly Parton for a day