Da 5 Bloods is the newest Spike Lee joint, and the war drama follows a group of four Vietnam War veterans who return to the country to search for the remains of their fallen squad leader, as well as the treasure that they buried there years ago. As you can expect, their journey is far from easy, and they have to battle nature, their haunting memories of the war, and some adversaries along the way.

The stunning Vietnamese topography is a key part in the Netflix film, and the focus on the setting has led fans to wonder if Da 5 Bloods was really filmed in the Southeast Asian country. Here’s what we know.

Where was Da 5 Bloods filmed?

Da 5 Bloods was mainly filmed in Chiang Mai, Thailand. As travel writer Travis Levius explains, he was in Thailand for a press trip and vacation when he came across a casting call for the film. He was later cast as a stand-in for Chadwick Boseman, and he detailed what Thailand was like in an article for CNN.

“He [Spike Lee] later explained to us that Da 5 Bloods, though Vietnam War-themed, would mainly be shot in Chiang Mai,” Levius explained. “Nothing would be produced on American soil, though a crucial scene needed to depict Black Americans in America—and that’s where we came in.” 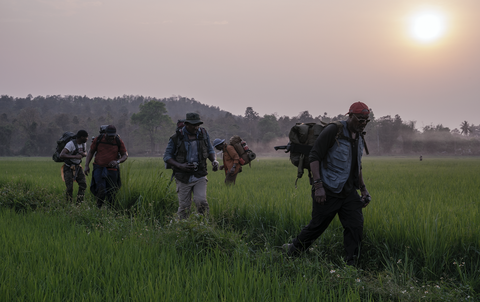 A scene in Da 5 Bloods.
Netflix

In addition, Levius wrote that the movie was shot in areas including “the jungles of Northern Thailand, the Mork Fa Waterfall area of Doi Suthep National Park, and the alluring Chiang Dao region.”

Da 5 Bloods did also film in Vietnam, but it’s unknown just how much of the movie took place there. A fan on Twitter said that they recognized a river in the city of Ho Chi Minh City, and Johnathan Majors, one of the film’s stars, recounted what is what like to film the movie to Men’s Health earlier this month.

In a clip posted online, Spike Lee also spoke about filming some key scenes in Vietnam: “It was where we needed to be, this could not be real on some Hollywood backlot…many days it was over 100°.”

ON LOCATION @SpikeLeeJoint filmed some key scenes in Vietnam for Da 5 Bloods a film that deals with the Vietnam War.#Da5Bloods #Netflix #SpikeLee #Vietnam #MovieTripTV pic.twitter.com/y4BW1rU2Lp