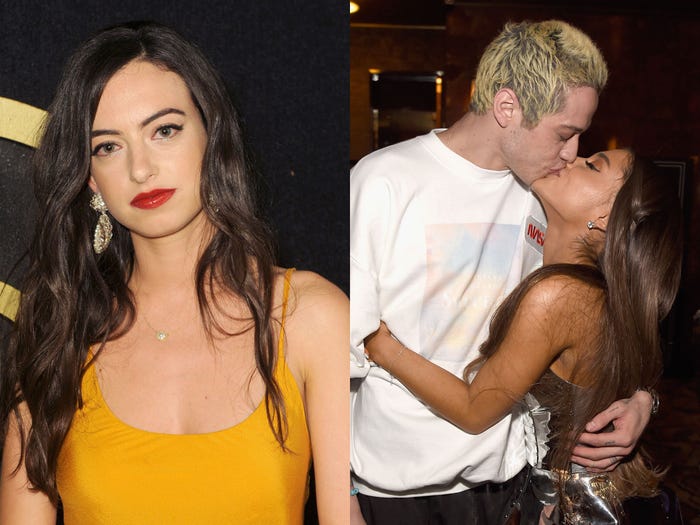 While Pete Davidson and Ariana Grande filled their feeds with loved-up photos of each other in 2018, Cazzie David, who dated the "Saturday Night Live" comedian for over two years, tried to ignore them by deleting her social media apps.

"At a minimum, I wouldn't be able to go on my phone again for a very long time," the 26-year-old wrote in "Erase Me," an essay from her new book, "No One Asked For This," which was published on Tuesday.

She continued, "If I saw any of this play out in real time, I would die trying to understand the rationale."

Weeks after Davidson broke up with her via text message and began dating Grande, David decided to reinstall Instagram.

"Going onto social media after a breakup is like going to work at the same office as your ex," she explained.

And since Davidson and Grande's relationship seemed to be advancing at lightning speed on social media — with matching tattoos and an engagement weeks into their romance — David said her office metaphor "was amplified tenfold."

"Going onto social media for me was like having to go back to work in the same cubicle as my ex and his new girlfriend while they had pornographic sex in front of me all day that was broadcast over the loudspeakers," she wrote.

She continued: "And then everyone in the workplace stands up, starts clapping, and declares, 'THIS IS THEIR SUMMER!!!!!!'"

David, who was on safari with her family in Africa following her and Davidson's breakup, said she faced backlash from Grande's fans regardless of what she posted online.

"I cautiously re-downloaded Instagram to post a few select photos from my trip so maybe I wouldn't look as pathetic as I felt," she wrote, explaining that everything from jacuzzi photos to pictures of wine glasses "got twisted in the most absurd ways."

Just as she stood in line to board a 16-hour flight home at the end of the trip, David's manager called to tell her that Davidson had proposed to the pop star.

"She told me they were engaged," she recalled, adding, "And I laughed."

Four months after Davidson and Grande got engaged, they called it all off.

"It was way too much too soon," an anonymous source told People. "It's not shocking to anyone."

Davidson has since gone on to date famous stars like Kate Beckinsale, Kaia Gerber, and Margaret Qualley. However, he's now reportedly single.

During a recent interview with the Los Angeles Times ahead of her book release, David confirmed that Davidson read her essay before it was published. At the end of the collection, she even thanks her ex in the acknowledgments.

"Pete. I love you. Thank you for being encouraging when you did not have to be. Your bravery inspires me and your friendship means the world to me," she wrote.