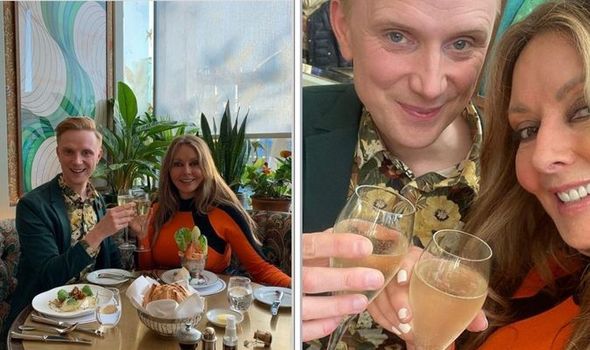 Carol Vorderman admits she's been 'out of sorts'

Carol Vorderman, 60, has been featured in an Instagram post by co-star Owain Wyn Evans. The upload saw the two out for a meal and drinks, with the latter claiming the pair had got a “warning” for their “noise levels”.

Volume control is often a *slight* problem for us

Other photos included the two working together on BBC Radio Wales.

Owain said: “It feels so good to be reunited with meine cyntaf dahling (my first dahling) @carolvorders.

“Volume control is often a *slight* problem for us.

The two shared banter together on the post, with Carol commenting with a string of laughing emojis.

Other celebrities were quick to jump on to the post, too.

Sam Quek said: “This has made my morning. Don’t change you two.”

The post was revealed in view of Owain’s 74,900 followers.

Carol has also recently spoke out about her pride in her son, for having graduated from his masters degree despite learning difficulties.

Her youngest Cameron, 25, received his award from Dundee University.

The former Countdown host had posted a series of photos from the day on her Instagram account, after she opened up on Cameron’s past struggles.

Sharing a photo of Cameron outside the University campus, Carol wrote: “If you’ve followed his story recently.

“Cameron has had special educational needs so to get a Masters degree… I couldn’t be more proud.”

The star then shared photos of Cameron in his black and yellow gown at the ceremony.

Under his robes, Cameron was dressed in a suit and was smiling next to his mum, who was wearing a black dress.

“So Cameron was in a special school with severe learning difficulties for most of his early life but he’s worked hard and learned strategies and boy how he’s turned it all around.

“I couldn’t be prouder of him.”

She added that she had never “dared to dream” about such an event happening.

She said that when he was young he had trouble “even recognising a letter” let alone reading, and that he had come such a long way.

Jenelle Evans Poses with Kids, Sticks It to David Eason in Holiday Photos

Joe Rogan Brags He Can Suck His Own D**k: 'I'm Super Flexible'!

Peter Weber: My Mom Was Right About Madison Prewett!