Britney Spears’ life in the spotlight is front and center in a new documentary from The New York Times.

In Framing Britney Spears, the unauthorized project which premiered Friday on FX and Hulu, key insiders who were once tied to Britney are featured in the doc, addressing everything from her meteoric rise to fame to how her image was painted in the media. They also share their thoughts on Britney’s ongoing conservatorship battle with her father, Jamie Spears, which sparked the #FreeBritney movement in 2019 and growing concern from fans across the globe.

“We started researching for it early last year,” producer-director Samantha Stark tells ET of how the project came together. “The purpose of it was to look back at the media coverage of Britney, especially around like 2007, 2008, through a 2020 lens. Post-‘Me Too’ [movement] when we’re able to talk about mental health more, all these things. And when you look back at the coverage, it’s so shocking, the misogyny.”

“I also thought, there’s these photographs, these still frames that people always think of when they think of Britney Spears,” she continues, referencing the infamous pics of the singer shaving her head and having an altercation with a paparazzo in 2007. “Those single frames have lasted for so long and I really wanted to know what was outside the frame. There’s been so much unfair coverage of Britney and so many assumptions about her. So that was originally what we were going for … what is outside of this frame? And how much has this one frame affected her life?” 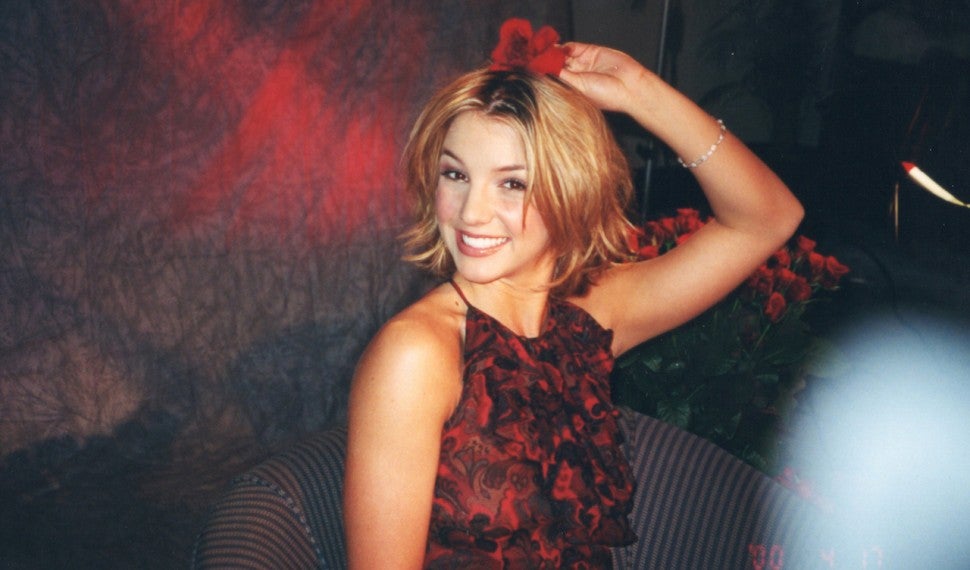 Footage in the documentary includes a number of wide-ranging interviews from the ’90s and ’00s, in which Britney appeared to be uncomfortable while answering invasive questions about her personal life. “Are you a virgin?” one reporter asked, around the time Britney was dating *NSYNC superstar Justin Timberlake. “Justin has gone on television and pretty much said you broke his heart … what did you do?” another inquired. We even see flashback footage of a 10-year-old Britney onstage, being asked, “Do you have a boyfriend? Why not?”

“Of all the things she could be asked about. Because what else could we possibly talk to a woman or a girl about,” Hayley Hill, Britney’s former stylist from 1997-2001, says in reaction to those interviews. “There’s so much more to her that everybody’s missing.”

Fans also see the pop star being brought to tears during a number of sit-down interviews that were conducted over the years. During a 2003 chat that aired on ABC’s Primetime Thursday, Diane Sawyer talked to Britney about “upsetting a lot of mothers in this country” for the example she was setting for their children.

In another interview, from 2006 with Matt Lauer for Dateline, Britney was prompted to answer whether she believed what the tabloids were saying about her at the time: that she was “a bad mom” to Jayden and Sean, the two kids she shares with ex-husband Kevin Federline. She also admitted in that interview that one of her biggest wishes was to get the paparazzi to leave her alone.

“I just feel like they’re taking cheap shots,” Britney replied, in regard to both the tabloids and paparazzi. “That’s America for you.”

Another topic the documentary explores is Britney’s relationship with her father, Jamie, and what led him to file for a conservatorship over his daughter in 2008. Under a conservatorship, a judge appoints a responsible person or organization to act as the conservatee’s legal guardian, making decisions on everything from their finances to which visitors are allowed and whether they can get married.

Some of the people who were close to Britney at the time shared their opinions on what it’s like seeing the singer still being under these types of legal restraints years later.

“To be honest, I didn’t then, nor do I now, understand what a conservatorship is,” Felicia Culotta, Britney’s former assistant and a lifelong friend of the family, says. “Especially for somebody Britney’s age, and for somebody capable of so much that I know firsthand she’s capable of.”

Britney’s conservatorship, which she’s been under since she was 26 years old, was recently extended until September 2021. Although she requested in court documents last year to have him “suspended immediately,” Jamie currently remains co-conservator of her estate.

“Once the conservatorship started, my role changed. My new job, I gave backstage tours,” Felicia claims. “When I went back, it was a different business management and her dad was involved. And so they did not hire me, the touring company hired me.”

“I took a backseat and simply did what I was hired to do,” she adds. “I don’t really know what went on. I just don’t know that they knew her well enough to realize her capabilities in making the decisions. Just me looking in, that’s what I saw.”

While Britney, now 39, has rarely publicly spoken about what it’s like to be under a conservatorship, the new documentary includes footage from Britney: For the Record, a documentary television film that aired on MTV in 2008. An emotional clip shows Britney tearing up while talking about how she would feel “so liberated” without any legal constraints.

“If I wasn’t under the restraints that I’m under right now, you know, with all the lawyers and doctors, and people analyzing me every day, and all that kind of stuff. Like, if that wasn’t there, I would feel so liberated and feel like myself,” she said at the time. “When I tell them the way I feel, it’s like they hear me but they’re really not listening. They’re hearing what they want to hear. They’re not really listening to what I’m telling them.”

Framing Britney Spears producers also spoke with legal experts for insight, like lawyer Adam Streisand, who met with Britney in 2008 after she learned her father was trying to establish a conservatorship.

“The first question I had was, does Britney have the capacity to be able to hire me? Does she have the ability to take my advice?” he recalls. “The first thing is, Britney was able to make the judgment, ‘Hey, I get what’s going on. I get that I’m not going to be able to resist this conservatorship.’ So that’s a pretty sound judgment.”

Adam further alleged that the day he went to court for Britney, the judge said, “I’ve got a medical report and you haven’t seen it, Mr. Streisand, and I’m not going to show it to you. It shows that she’s not capable of retaining counsel and directing counsel on her own.”

“When the judge told me, ‘Mr. Streisand, I’m not going to let you represent her. I’m going to appoint somebody,’ I felt that was not the right decision by the judge,” he says. “I felt that based on my interactions with Britney that she was capable of retaining me and directing me and that the judge should have allowed that to happen. But I didn’t know what I didn’t know, right? I still don’t know what is in that report. So I had to respect that.” 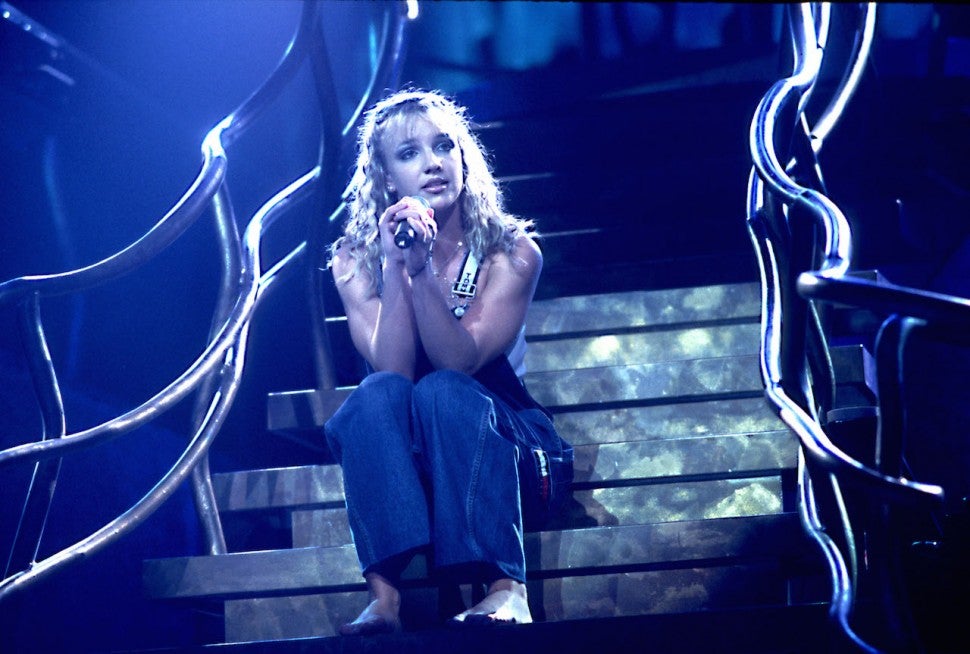 Meanwhile, Kim Kaiman, former senior director of marketing at Jive Records from 1998-2004, remembered Britney as being “so serious and so focused” when they worked together.

“I remember Britney came in and I was really impressed,” she recalls. “I thought, ‘This is the style.’ This is a girl that’s coming from strength, your friend that you kind of idolize a little bit, but that at the end of the day has the same kind of hopes and dreams that you do.”

“Her mother [Lynne Spears] would do whatever it took, personally and for the family’s sake, for Britney to be a star,” she continues. “Lynne supported Britney. I want to say Lynne because I never talked to her father. The only thing Jamie ever said to me was, ‘My daughter’s going to be so rich, she’s gonna buy me a boat.’ That’s all I’m going to say about Jamie.”

Framing Britney Spears producer-director Samantha Stark told ET that The New York Times attempted to reach out to Britney directly, but did not conduct an interview with her for the documentary.

“Since Britney has such a tight circle around her, in part because of the conservatorship, or it’s allowed to be that way because of the conservatorship, journalists haven’t really been able to interview her freely,” she says. “We, as The New York Times, haven’t interviewed her because we want to be able to do it freely, with no one trying to adjust what she says or anything. And it just feels like you can’t ask Britney.”

The NYT also reached out to the following people or their representatives, who did not respond to or declined requests to be interviewed on camera for the documentary: Jamie Spears, Lynne Spears, Jamie Lynn Spears, Bryan Spears, Andrew Wallet, Samuel D. Ingham III and Sam Lutfi.

“We had a lot of people who didn’t respond. When you’re in a legal proceeding you don’t talk to the media, that’s kind of standard,” Samantha says. “We tried [reaching out to] everybody in multiple ways.”

While Britney’s legal battle over her conservatorship continues, her pal, Felicia, is hopeful that the singer will one day share her side of the story, freely and when the time is right.

“The one reason that I agreed to do the interview is so we could remind people of why they fell in love with her in the first place,” Felicia says in the doc. “I know at some point she will tell her story, I know she will.”

“I am so grateful for when that point comes,” she adds. “That she’s able to sit down and, you know, everything will fall into place.”

Parents complained to the FCC about Shakira and J.Lo’s Super Bowl halftime show