As confirmed by his manager Jenni Izumi, the ‘Just A Friend’ rapper is surrounded by professionals who are working hard to provide the best healthcare for his health issues.

AceShowbiz –Biz Markie has not gone yet. After reports of his death circulated around on social media, the “Just A Friend” rapper is confirmed by his manager Jenni Izumi to be “still under medical care” for his “significant brain damage.”

“The news of Biz Markie’s passing is not true. Biz is still under medical care, surrounded by professionals who are working hard to provide the best healthcare possible,” Jenni assured in a statement. She explained further, “Biz’s wife and family are touched by the outpouring of love and admiration from his friends, peers and fans alike. At this time, we ask for your continued thoughts and prayers during this difficult time.” 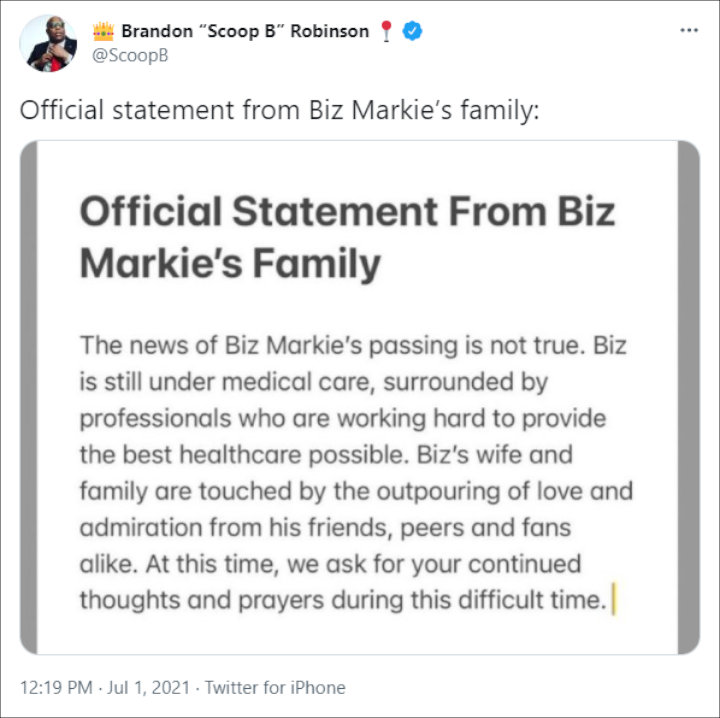 Biz Markie is said to be ‘under medical care.’

Roland S. Martin, who is a journalist and author, backed Jenni’s declaration by declaring on Twitter that Biz, whose real name is Marcel Theo Hall, is still alive. He also urged people against spreading misinformation, adding that he had been on the phone with the 57-year-old musician’s wife.

“I am ON THE PHONE right now with @BizMarkie’s wife at 1:14 am EST. He HAS NOT PASSED AWAY. So PLEASE STOP IT! She says this is hurtful to all of his family,” Roland begged. He then clarified, “Folks, I’m a JOURNALIST. I’m not gonna pass on BS. I’ll let you know what I KNOW FOR CERTAIN. #BlackOwnedMediaMatters.”

Despite Jenni and Roland’s assurance, another reporter by the name of Brandon “Scoop B” Robinson suggested that the “Nobody Beats the Biz” spitter “may not make it through the weekend.”

The death rumors came after a series of worrying updates about Biz’s health issues over the past year. In July 2020, it was reported he spent several weeks in hospital receiving treatment for an illness triggered due to complications from his type 2 diabetes.

Five months later, it was claimed Biz had suffered a stroke while recovering in the hospital from another incident spurred by his diabetes. At the time, HipHopDX reported that the musician was “not doing great, but it’s not as scandalous as it felt in the beginning.”

Kevin Hart Admits Being ‘Immature’ Over His Reaction to Homophobic Tweets