Barbara Walters — one of the biggest and most recognizable news anchors in the world — has died.

We’re told she died at her home, surrounded by loved ones. Barbara had been in declining health for several years.

The legendary ABC broadcaster passed away Friday in New York City. Barbara had receded from public view the past several years, opting to live a private life. She hadn’t been seen out and about since at least 2016.

Barbara’s 60-plus-year career was in part catapulted by her coverage of President John F. Kennedy‘s assassination in 1963. She came on-air to report on the story alongside anchor Hugh Downs, giving a man-on-the-street perspective from New York City.

Of course, she went on to become one of the longest-serving journalists in the game — first working for NBC’s “Today” show as a writer and researcher, and working her way up in the network through the ’60s and early ’70s, eventually becoming their first female cohost.

In 1976, Barbara jumped over to ABC … landing a job on their “Evening News” program. She was the first woman to anchor a network news show, but her cohost was not having it and it made success almost impossible. Not long after, she became a fixture and regular contributor and the eventual host of the network’s “20/20” newsmagazine program and appeared on the show for decades.

If you can think of a famous person, Barbara probably interviewed them, plain and simple.

Her achievements go well beyond just that though — Walters also co-created and cohosted ABC’s popular daytime talk show, “The View,” which became one of her main focuses professionally after semi-retiring from hosting “20/20” in 2004. She stayed on “The View” through mid-May 2014, and continued to make guest appearances after her official send-off.

Barbara’s final on-air interview was with Donald Trump for ABC News in 2015. Her last public appearance was reportedly in 2016 — she hadn’t been seen much since then. The last time we got her on camera was in 2014 when she graciously signed autographs. 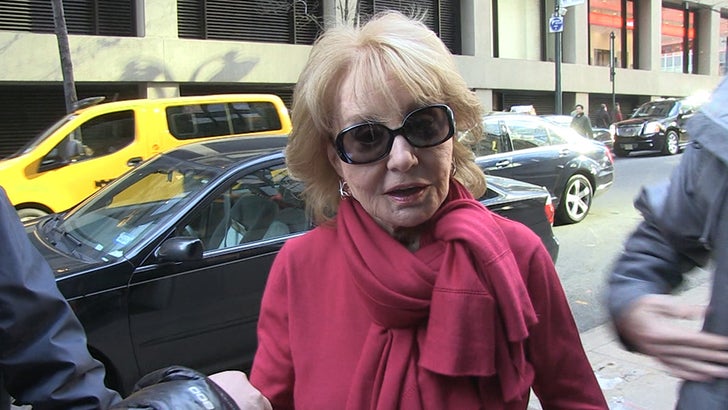 She had one daughter with Lee Guber, Jacqueline Dena Guber.

Barbara was a staple in pop culture too — often portrayed on ‘SNL’ by several different cast members over the years. She also once spoofed herself by appearing on ‘Weekend Update.’

She was inducted into the Television Hall of Fame in 1989 and received a star on the Hollywood Walk of Fame in ’07. Barbara has won countless Daytime and Primetime Emmy Awards over the course of her career, as well as many other lifetime achievement accolades.

Barbara’s publicist, Cindi Berger, tells TMZ … “She lived her life with no regrets. She was a trailblazer not only for female journalists but for all women.”