EXCLUSIVE: “Bachelorette” stars Clare Crawley and Dale Moss were spotted shopping in New York City and both were sporting rings.

The 40-year-old reality TV star was dressed casually in black leggings and an orange tank top. A diamond ring sparkled on her left hand.

Meanwhile, Moss, 32, also wore a dark-colored band on a finger as well.

The couple previously got engaged after just a few weeks while on Season 16 of the ABC dating series in summer 2020. Moss got down on one knee and proposed with a reported 4.5-carat diamond.

“Put that ring on my finger, I’ve waited a lot of years for this,” Crawley said while on the show. “You embodied everything that I want in a man. I’m just so in love with the man that you are.” 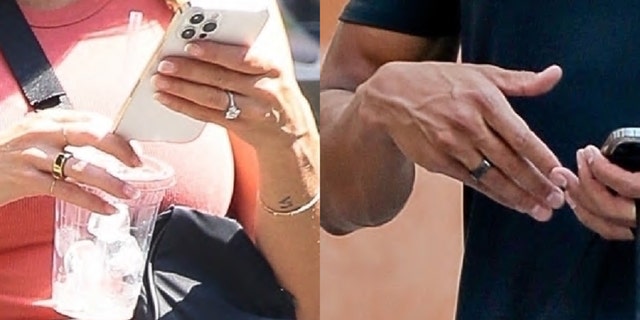 Crawley (L) spotted with her engagement ring and Moss (R) seen wearing a dark band on his right hand.
(Backgrid)

Moss told her, “From the moment I stepped out of the limo, this was special. I know without the shadow of a doubt that you would go to the end of the world for me and I’ve never had that. I’m so grateful for that.”

Then in January 2021, the pair split. “I wanted to share with you all that Clare and I have decided to go our separate ways,” the ex-football star confirmed in a post on social media at the time.

“We appreciate the love and support we’ve received from so many people, but this is the healthiest decision for both of us at this time,” he added.

Crawley has released her own statement on Instagram. “Speaking for myself, my intentions with this relationship have always been clear, so the truth is I am crushed,” the star continued. “This was not what I expected or hoped for and am still trying to process this.” 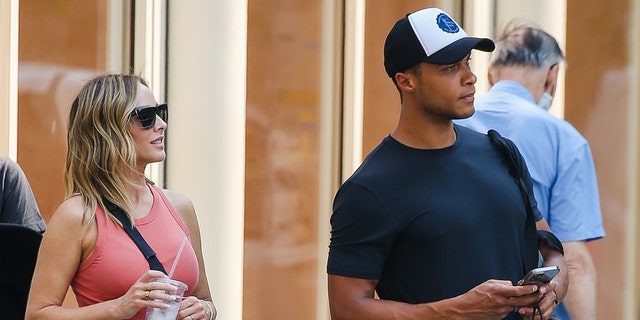 "Bachelorette" couple Clare Crawley and Dale Moss have rekindled their romance after splitting in January. They were both seen sporting matching bands each on their right hand with Clare wearing her engagement ring on her left.
(Fernando Ramales / BACKGRID)

A few weeks later, the couple reunited in Florida and in March was spotted kissing in New York City. Now, it appears they are engaged again.

The duo also enjoyed the Fourth of July weekend together. “Happy 4th of July,” she captioned a photo of herself snuggling up to Moss. “This exact day/time last year I was packing my car and heading out solo to Palm Springs… What a difference a year makes!”