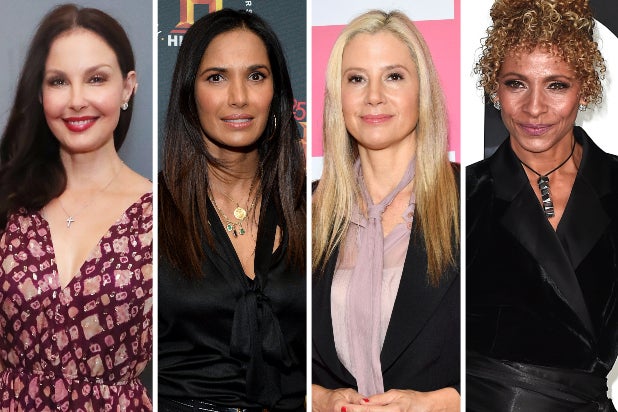 Ashley Judd, Padma Lakshmi, Mira Sorvino and Michelle Hurd called on senators to reject the nomination of Amy Coney Barrett to the Supreme Court on Friday.

“Our stories are different, but our experience as survivors of sexual violence united us in saying ‘me too’ three years ago. Today, it unites us again in urging the U.S. Senate to reject the nomination of Judge Amy Coney Barrett to the U.S. Supreme Court,” Judd, Lakshmi, Sorvino and Hurd said in a joint statement. “Our society now demands we hold people who abuse their power accountable for sexual harassment and assault, no matter how important those people are. Yet multiple times, Judge Barrett ruled against survivors of rape, instead siding with powerful abusers and the powerful institutions that enable them.”

“We know painfully well that the systems for survivors to pursue justice are broken. They cannot be repaired and must be rebuilt. But Judge Barrett’s record shows she’d reshape the law to make it even harder for survivors to be heard and for justice to be achieved,” they continued. “This disqualifies her from serving on our nation’s highest court.”

On Thursday, Time’s Up also condemned the accelerated timeline for Barrett’s nomination as “irresponsible” and an “undemocratic abuse of power.”

“Despite the woefully insufficient time available for vetting Judge Amy Coney Barrett’s 23-year record and views, it’s clear she is extreme and has no place on the Supreme Court. From access to health care and reproductive rights, to economic security and our ability to live freely and fully as people of all backgrounds, Judge Barrett is a real threat to the values and rights we fought so hard to win,” Time’s Up President and CEO Tina Tchen said. “Make no mistake: our fundamental rights are on the line. The Senate needs to say no to this extreme nominee.”

For advocates against sexual assault, some of the main contentions with Barrett’s record are two rulings the judge made in 2018 and 2019 related to sexual assault in county jails and sexual misconduct on college campuses, respectively.

In the 2018 case, Barrett joined a ruling that argued that a county was not liable for the sexual assault of a woman inmate, effectively undoing a jury’s verdict that awarded the inmate — who said she was assaulted multiple times by a jail guard — $6.7 million. In the 2019 case, Barrett ruled in favor of a male student who was accused of sexual assault and suspended for a year by his university, arguing that the suspension could have been in violation of Title IX and that the Obama administration’s guidelines on campus sexual misconduct pressured institutions to discriminate against men.

The Senate Judiciary Committee advanced Coney Barrett’s nomination on Thursday, despite all 10 Democrats on the committee staging a boycott and refusing to vote. But Senate Republicans have pushed forward, with Senate Majority Leader Mitch McConnell praising Barrett as an “exceptional nominee” and blaming Senate Democrats for initiating an “escalation” — despite the fact that McConnell himself was the one who blocked the nomination of Merrick Garland, President Barack Obama’s Supreme Court pick in 2016.

The full Senate is expected to have its final confirmation vote for Coney Barrett next Monday, just a week before the November election.

From ‘Bachelor’ Breakup to Baby! Arie and Lauren’s Romance Timeline