Home » Celebrities » As The Best Animated Feature Competition Heats Up, Can Netflix Or Another Newcomer Bring Home The Oscar?

Disney swept the animation category with three nominations last Oscar season, culminating in a win for Encanto. This year, Netflix is coming on strong with more than a few contenders, including Guillermo del Toro’s Pinocchio. DreamWorks Animation is back with a few contenders of its own, while Apple, A24 and GKIDS are seeking their first Oscar win for Best Animated Feature. With only five nominations available, who will go on to compete for the prize?

Walt Disney Studios has a few contenders this year, but their frontrunner is Pixar’s Turning Red. Director Domee Shi revisited her own awkward teen years to create a story of a young girl struggling to please her family as she enters adolescence. Turning Red follows Meilin Lee (Rosalie Chiang), a 13-year-old Chinese Canadian girl from Toronto who works at her family’s temple to make her mother, Ming (Sandra Oh), proud. Due to a family blessing/curse, Mei transforms into a giant red panda whenever she experiences strong emotions, which is less than ideal for a teenager. The film, which marks the first from Pixar to be solely directed by a woman, has received critical acclaim for Shi’s depictions of female friendships and the mother-daughter relationship. 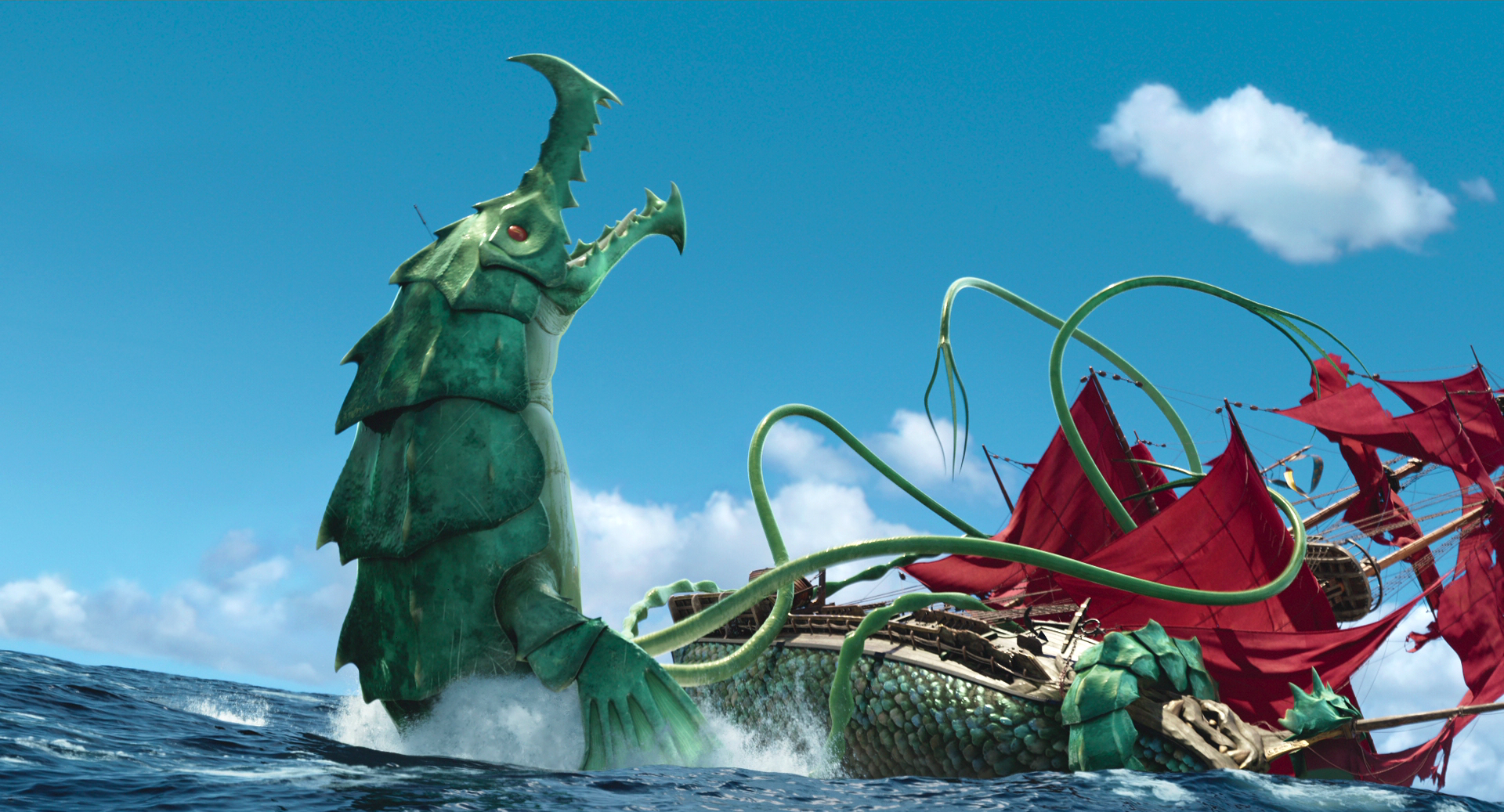 After 25 years of working in Disney animation, director Chris Williams decided that Netflix was the right place to finally make the animated action-adventure he always dreamed of, with The Sea Beast. The film follows Jacob (Karl Urban), a hunter of sea monsters, and Maisie (Zaris-Angel Hator), a young stowaway, as they join the crew of the Inevitable and embark on a hunt for the elusive Red Bluster. After falling overboard during a difficult battle, Jacob and Maisie find themselves stranded on a deserted island surrounded by beasts. The pair soon discover that the beasts are not as sinister as they are rumored to be, which causes Jacob to grapple with the idea of what it truly means to be a hero. Sony Pictures Imageworks, which also animated Netflix’s last nominee The Mitchells vs. the Machines, was challenged by Williams to craft scenes of epic battles between hunters and the beasts on the sea, which is a notoriously difficult setting to animate. The Sea Beast has become Netflix’s most successful animated film to date, with more than 160 million hours viewed.

Netflix’s next competitor is My Father’s Dragon, directed by Nora Twomey and based on the 1948 children’s novel of the same name. The film follows Elmer (Jacob Tremblay), a young boy who helps his mother run a candy shop in their small town. When the store is forced to close, as the town’s population dwindles, he and his mother move to a crowded city where the ensuing hardships lead to a rift in their relationship that causes Elmer to run away. A cat he befriended, voiced by Whoopi Goldberg, tells him of a dragon being kept on Wild Island that could solve all of his problems. On the island, he meets a clumsy and curious Boris the Dragon (Gaten Matarazzo) and the two set out on an adventure to save Wild Island. As opposed to the 3D animation of The Sea Beast, My Father’s Dragon sticks to a 2D storybook style, which has led to positive reviews and popularity among younger viewers. 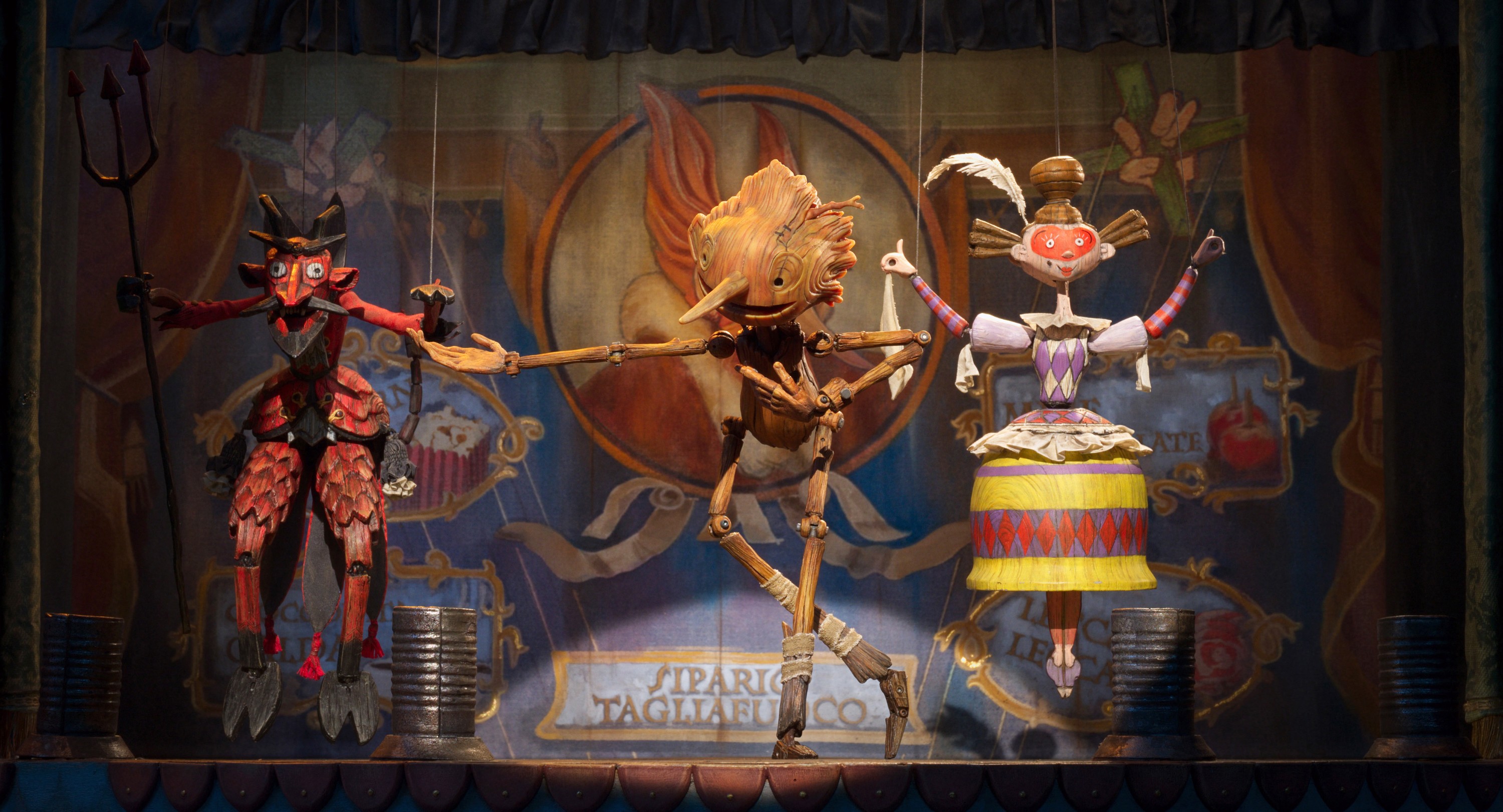 Guillermo del Toro’s Pinocchio delivers a visually stunning stop-motion adaptation of the Pinocchio fable, reimagining the story in 1930s Italy during the Fascist reign of Benito Mussolini. After the loss of his son Carlo due to an aerial bomb, woodcarver Geppetto (David Bradley) carves a wooden boy from the tree at Carlo’s grave, which has recently become the home of a cricket named Sebastian (Ewan McGregor). A mysterious Wood Sprite (Cate Blanchett) brings the puppet to life, names him Pinocchio (Gregory Mann), and promises to grant Sebastian a wish if he serves as the boy’s conscience. Co-directing with Mark Gustafson, Del Toro brings his signature artistic style to the project, injecting a shot of playful anarchy into the tale of a boy trying to live up to his father’s expectations.

DreamWorks Animation is back in the mix this year with two major contenders in The Bad Guys and Puss in Boots: The Last Wish. Based on a children’s graphic novel series, The Bad Guys follows a group of anthropomorphic criminals, Mr. Wolf (Sam Rockwell), Mr. Snake (Marc Maron), Ms. Tarantula (Awkwafina), Mr. Shark (Craig Robinson) and Mr. Piranha (Anthony Ramos). After getting caught, Mr. Wolf makes a play to escape prison time by claiming that the group wants a chance to reform themselves into good guys. Though it starts as a ruse, Mr. Wolf soon finds himself excited by the opportunity to better himself. The film grossed more than $250 million worldwide and was the second-highest-grossing animated film of 2022.

DreamWorks earned their first Best Animated Feature Oscar in 2001 with Shrek, and this year they are bringing the sixth installment in the series with Puss in Boots: The Last Wish. The story takes place after Shrek Forever After, when Puss in Boots (Antonio Banderas) is accidentally killed by a bell and discovers he is down to his ninth, and final, life. He soon learns about a wishing star that could help them get his lives back. However, during his quest he is hunted by a mysterious wolf. Puss in Boots: The Last Wish has yet to have its wide theatrical release, but early reviews for the film have been positive. 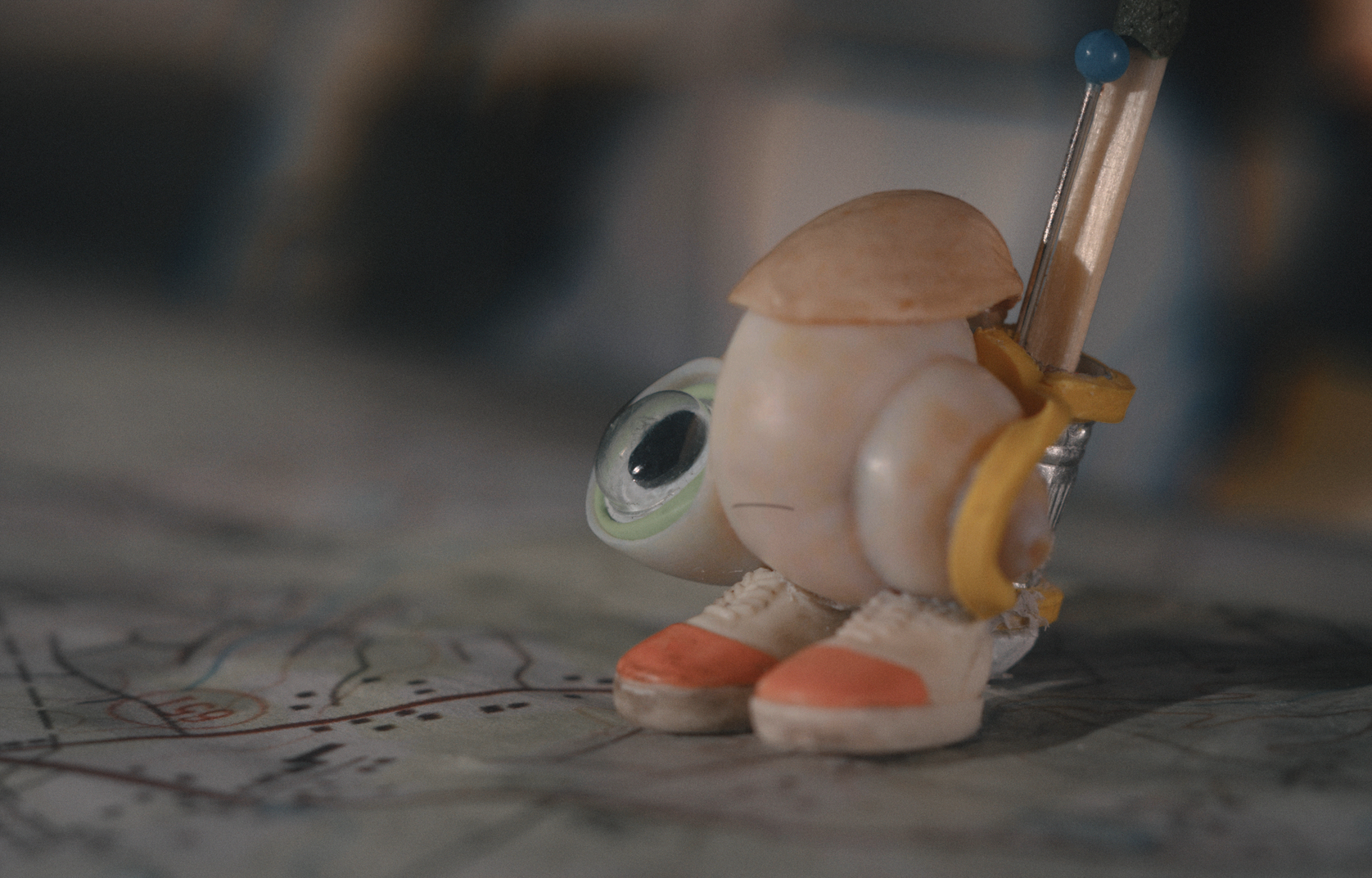 A24 has entered the race this year with Marcel the Shell With Shoes On, based on a series of short films written by director Dean Fleischer Camp and Jenny Slate. Using a documentary style, it sees filmmaker Dean (Fleischer Camp) move into an Airbnb where he finds a tiny talking shell named Marcel (Slate). Marcel lives in the home with his grandmother Connie (Isabella Rossellini) and has created whimsical and resourceful ways of dealing with problems in his everyday life. Dean begins filming Marcel’s antics and uploads the videos to YouTube, leading to Marcel becoming a cultural phenomenon that attracts the attention of 60 Minutes’ Lesley Stahl. Although the film has animated characters interacting with the live-action world, it was deemed eligible to be nominated for Best Animated Feature and has since gained a lot of traction in the race. 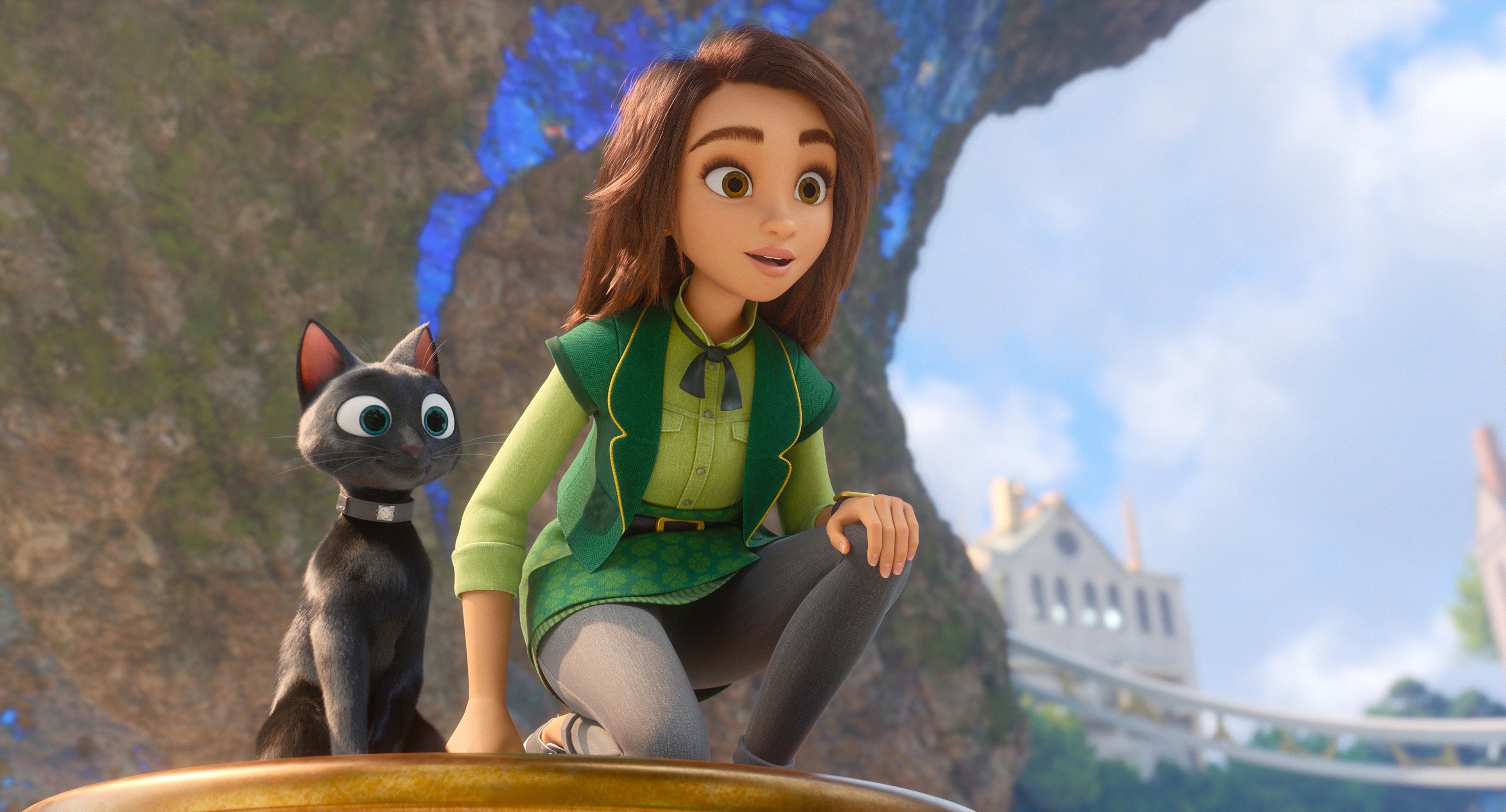 After receiving its first nomination in the category for Wolfwalkers in 2021, Apple is looking to get its second nomination this year with Luck, directed by Peggy Holmes. Sam (Eva Noblezada) is the unluckiest person in the world. Her life changes for the better when she finds a lucky coin, which her bad luck soon causes her to lose. Bob (Simon Pegg), a black cat with a Scottish accent, comes looking for the coin, only to accidentally bring Sam into the mystical Land of Luck where the two must go on a journey to find it and turn her luck around. The film’s strength lies in its voice acting and choreographed animated sequences, which were enhanced by Holmes’ background in dance.

Though Belle didn’t garner the nomination last year, GKIDS has a new chance with its animated musical Inu-Oh. Based on the novel Tales of the Heike: Inu-Oh by Hideo Furukawa, the film follows two outcasts in 14th-century Japan: Tomona (Mirai Moriyama), a blind Biwa player, and Inu-Oh (Avu-chan), a deformed Noh dancer born with a curse. The two discover they have the ability to hear the spirits of the Heike, a clan of warriors whose stories are lost to time, and the pair begin to perform their stories in a new style resembling modern hair metal. Inu-Oh’s performance recounting the Heike stories starts to cure him of the curse and rockets them to stardom, but they soon attract the attention of the country’s leading power, who doesn’t want these stories told. The film received immediate critical acclaim as a story of artists compelled to speak truth to power through an exciting performance style. 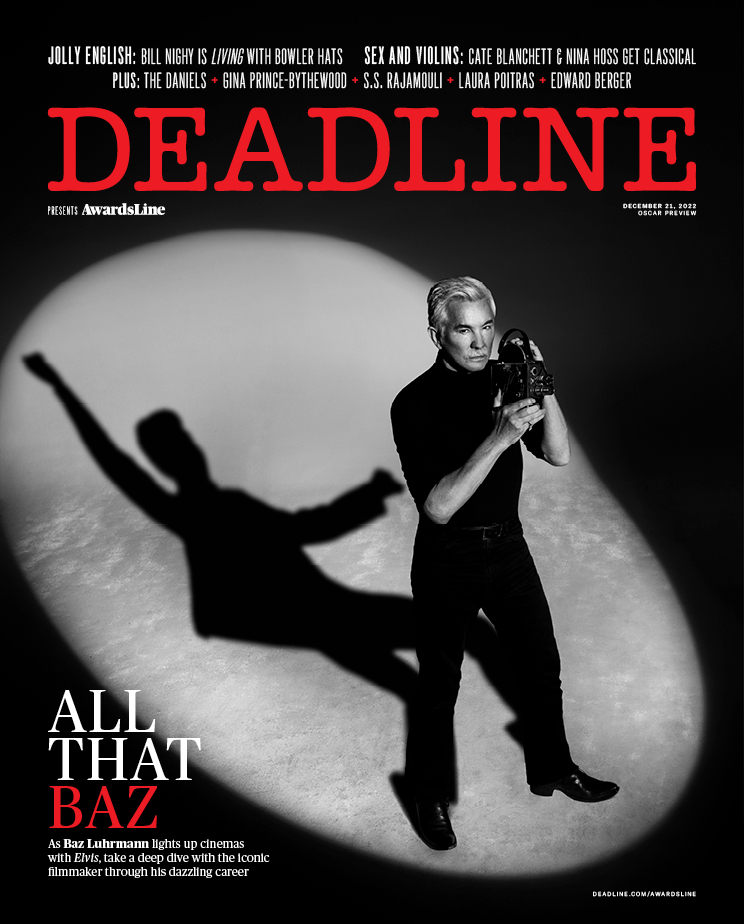 Last year’s winner, Encanto, received a huge bump in popularity thanks to the song “We Don’t Talk About Bruno”, but this year, there haven’t been any songs going viral to keep a film in the public eye. Will Disney or DreamWorks be able to pull off another win, or will Netflix finally break through with multiple films, including Del Toro’s long-awaited iteration of Pinocchio? Will GKIDS or Apple secure their first win after receiving only nominations, or will A24 deliver a surprise upset with Marcel the Shell? Compared to last year, this season seems like anyone’s game to win. 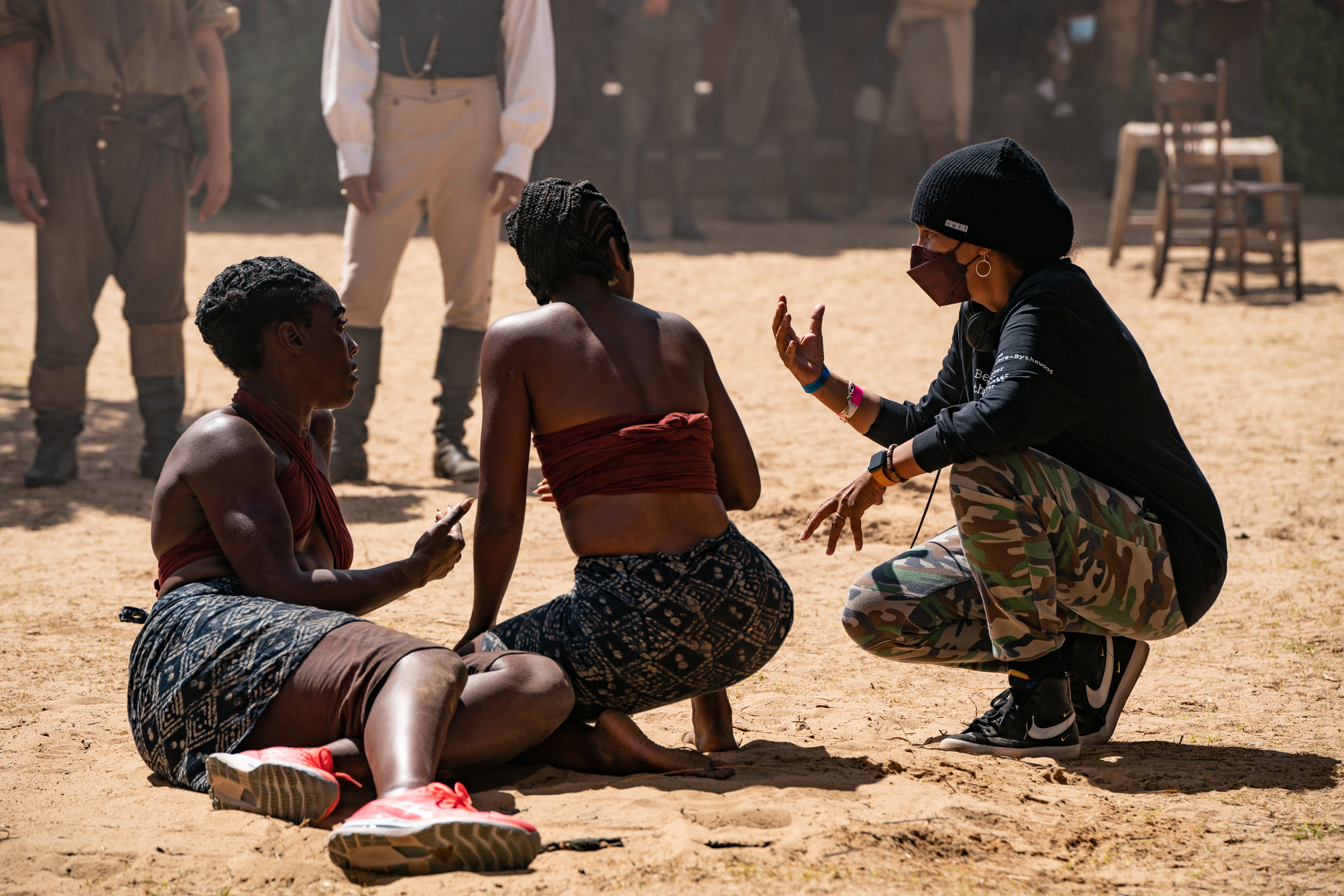