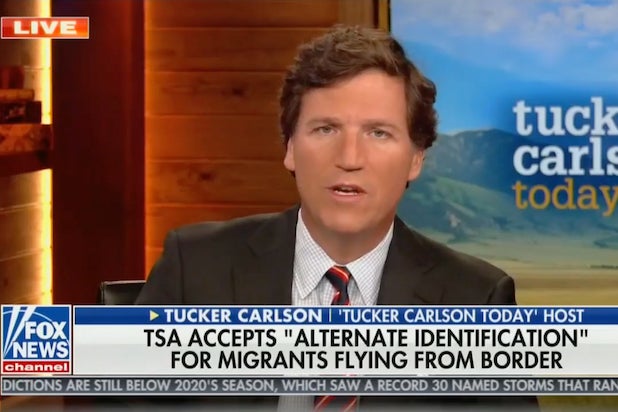 The Anti-Defamation League’s CEO, Jonathan Greenblatt, called for the ouster of Tucker Carlson on Friday after the Fox News host supported a “white supremacist tenet” that is “antisemitic, racist and toxic.”

“‘Replacement theory’ is a white supremacist tenet that the white race is in danger by a rising tide of non-whites,” Greenblatt tweeted. “It is antisemitic, racist and toxic. It has informed the ideology of mass shooters in El Paso, Christchurch and Pittsburgh. Tucker must go.”

Greenblatt was responding to a recent interview with Carlson on Fox News Primetime during which Carlson argued that Democrats were trying to “change the population” and “dilute the political power” of people who live in the U.S. — an ideology that hews closely to a racist, white supremacist theory that white people are being replaced and disenfranchised by nonwhite people.

“The government shows preference to people who have shown absolute contempt for our customs, our laws, our system itself, and they are being treated better than American citizens,” Carlson said. “Now, I know that the left and all the little gatekeepers on Twitter become literally hysterical if you use the term ‘replacement,’ if you suggest that the Democratic Party is trying to replace the current electorate, the voters now casting ballots, with new people, more obedient voters from the Third World. But they become hysterical because that’s what’s happening actually. Let’s just say it: That’s true.”

Later in the interview, Carlson argued that it was a “voting rights question.”

“Every time they import a new voter, I become disenfranchised as a current voter,” Carlson said. “Everyone wants to make a racial issue out of it. Oh, you know, the white replacement theory. No, no, no. This is a voting rights question. I have less political power because they’re importing a brand new electorate. Why should I sit back and take that?”

When reached by TheWrap, a Fox News spokesperson pointed to Carlson’s comments that he was describing a voting rights issue, not the white replacement theory.