Home » Celebrities » ADRIAN THRILLS: Rocking into the Jubilee with Queen? It's champion

When it comes to kick-starting the Platinum Party At The Palace, organisers couldn’t have opted for a more fitting opening act than Queen.

Their regal name aside, the rock legends have previous form, with Brian May having memorably played God Save The Queen from the roof of Buckingham Palace for 2002’s Golden Jubilee.

The guitarist says he has something up his sleeve for this weekend, too, when Queen + Adam Lambert will join Diana Ross, Duran Duran, Rod Stewart and others at a televised concert to celebrate 70 years of Her Majesty’s reign before 22,000 fans in London.

On the evidence of this exhilarating Manchester gig, part of the band’s mammoth Rhapsody Tour, whatever he delivers should be spectacular. The ongoing collaboration between Queen founder members May and Roger Taylor and American singer Lambert honours the group’s towering catalogue of songs without lapsing into pastiche. 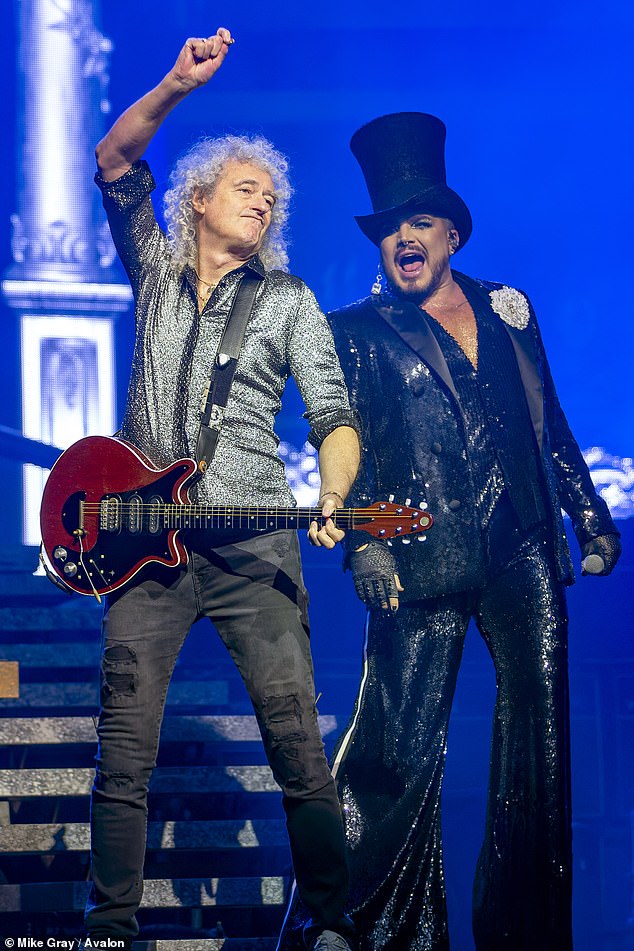 When it comes to kick-starting the Platinum Party At The Palace, organisers couldn’t have opted for a more fitting opening act than Queen. Brian May and Adam Lambert are pictured above performing on stage

‘I’m pinching myself that we’re actually here,’ said May to a packed arena. Originally scheduled for 2020 but twice postponed because of the pandemic, these are Queen’s first UK dates since 2018’s Bohemian Rhapsody biopic.

‘Most of you bought tickets for this show two-and-a-half years ago, so this is an emotional moment,’ he went on.

He wasn’t wrong. The 150-minute, 28-song performance combined the raw energy of a classic rock concert with the digital bells and whistles of a modern pop production.

The audience, which included a number of folk dressed as the late Freddie Mercury, comprised fans of all ages, reiterating the band’s cross– generational appeal.

‘My name is Prince and I’ve come to play with you,’ says the late superstar at the start of this live album taken from 1985’s Purple Rain tour.

Recorded in Upstate New York at the Carrier Dome in Syracuse, it captures a brilliant showman at the peak of his powers.

The record switches effortlessly between funk, soul, rock ’n’ roll and pop. But it’s the standards that steal the thunder in a show that includes Little Red Corvette, 1999 and When Doves Cry. 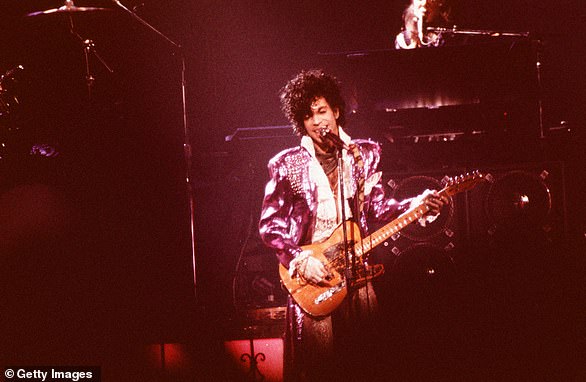 Recorded in Upstate New York at the Carrier Dome in Syracuse, it captures a brilliant showman at the peak of his powers

May teasingly introduced Lambert as ‘the new boy’. The 40-year-old former American Idol runner-up wasn’t even born when Queen released their early 1980s hits Under Pressure and Another One Bites The Dust, but he has been capably filling the boots of Mercury, who died in 1991, for a decade now. He’s more an old hand than a young pretender.

To his credit, the Californian didn’t mimic Freddie’s moves. That would have been a mistake. Blessed with astonishing vocal range and rocket-propelled power, he has his own style. Cutting an imposing figure in padded shoulders, an oversized top hat and platform boots, he held a stunning, high-pitched note in a show-stopping finale to Somebody To Love — a supersonic man in his own right.

But the current incarnation of Queen really has two frontmen, and this was May’s show as much as Lambert’s.

Track of the week

Now based around core members Clare Grogan and her musician husband Stephen Lironi, the Glasgow group return with their first new music in 39 years.

The title track of a forthcoming album, Mascara Streakz is a synth-pop number that harks back to the band’s 1980s heyday.

Wearing black jeans, trainers and a shirt with rolled-up sleeves (he later switched to a long, flowing jacket), the guitarist, 74, reeled off a string of scintillating solos while patrolling a walkway. The core trio, augmented by three additional musicians, began by reiterating their credentials as 1970s hard-rock stalwarts. With drummer Taylor, 72, anchoring the ensemble with panache and stamina, they raced through Now I’m Here, Seven Seas Of Rhye and Killer Queen.

If Lambert, at full throttle, lacked the more delicate touches Freddie occasionally brought to the stage, there was no shortage of intimacy when May moved on to a smaller, acoustic platform in the middle of the arena to perform Love Of My Life, a ‘solo’ ballad that was accompanied by thousands of fans singing with him while holding illuminated smartphones in the air.

With May eventually joined by Taylor and Lambert, the trio sang the vintage album cut ’39. As he introduced the number, a sci-fi folk song about a time-travelling astronaut, May, who has a doctorate in astrophysics, gave fans a science lesson on the speed of light and its effect on the passing of time. I got the gist of his reasoning . . . or at least I think I did.

The latter part of the show placed more of an onus on singalongs from the classic pop group Queen became in the 1980s. I Want To Break Free was a highlight. Plumes of fire shot upwards from May’s guitar in A Kind Of Magic.

With May standing on a giant asteroid, surrounded by orbiting planets, he also played an improvised solo based on the second movement of Dvorak’s New World Symphony. In truth, it went on a bit, but nobody present was in the mood to begrudge one of rock’s great virtuosos a little indulgence.

As the show sped past the two-hour mark, the thought occurred that Queen had yet to play some of their biggest crowd-pleasers.

They duly obliged by reeling off Radio Ga Ga, Bohemian Rhapsody, We Will Rock You and We Are The Champions in succession.

Of course, Queen with Adam Lambert will never be Queen with Freddie Mercury, and that is acknowledged. ‘Just like all of you, I’m a fan,’ Lambert said.

‘I’m lucky to have been sharing a stage with these two rock’n’roll legends for ten years. I’m lucky to pay tribute to their music . . . and the incomparable rock god Freddie Mercury.’

It’s easy to see why May and Taylor wouldn’t want to give up on something as good as this. Any way the wind blows, this was a magnificent return to the UK stage.

Guess Who This Shaggy Star Turned Into!

The Sussexes are ‘heeding government advice’ during the coronavirus pandemic