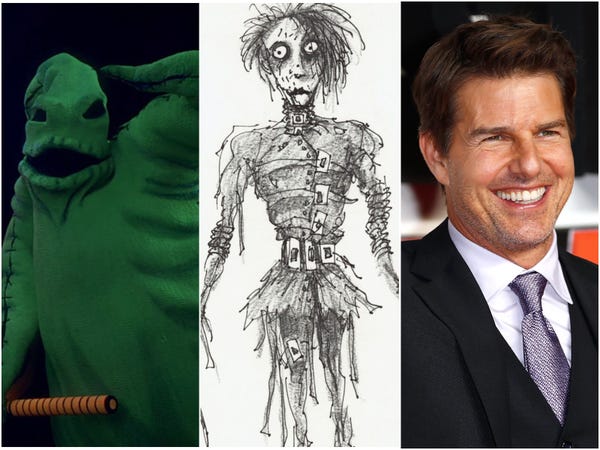 Edward Scissorhands was inspired by the screenwriter's dog, as well as a drawing Tim Burton did as a teenager 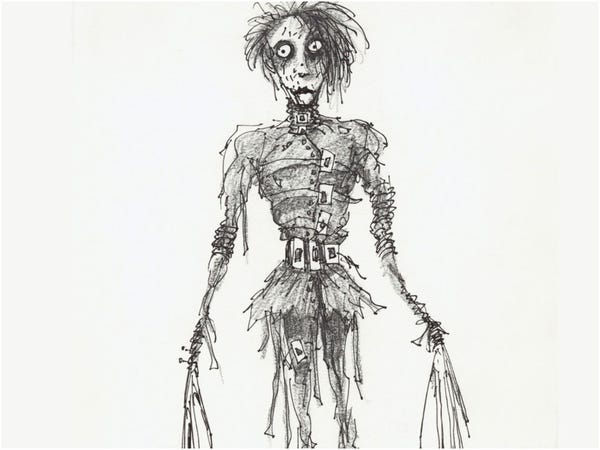 Screenwriter Caroline Thompson told Buzzfeed: "[Director] Tim had done a drawing when he was in high school and he told me about it as we were searching for something to work on together, and I said, 'Stop right there, I know exactly what to do with this.'"

She also said that the characterization of Edward was partly based on her dog, telling the Los Angeles Times in 1990: "She had this preternaturally alert quality, but no way to communicate it. But for the physical constraints, I always felt she could speak."

Thompson also told Buzzfeed that the film was "a love letter" to her dog, who had been dead for about six years before she wrote the script. 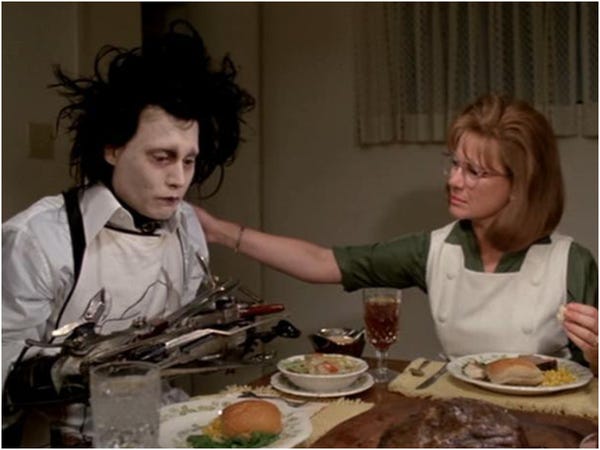 Edward Scissorhands isn't exactly the loquacious type. Throughout the movie, the leading role doesn't have many lines at all.

In fact, as Edward, Johnny Depp only says less than 150 words in total, according to the movie's screenwriter, Caroline Thompson.

Thompson told The Huffington Post: "Somebody once counted the number of words that he says in the script and I can't recall it precisely, but I think it's something south of 150 words. He's basically a nonverbal character. He's a beautiful, wild-eyed dog. Johnny nailed my dog."

Each scissor-finger is completely different from the next 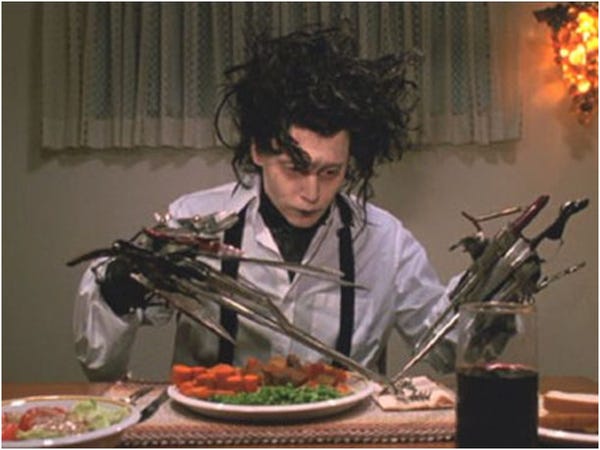 Special make-up effects creator Stan Winston was the person entrusted with making the titular and now-iconic scissorhands. He researched every type of scissors and shears he could find for the character.

The end result is a mismatch of various scissor designs and styles, making each finger unique from the next.

Burton said he originally "didn't think he'd actually have scissors for fingers. I thought they'd just be long sharp pieces of metal that weren't finished – but this is much better!" 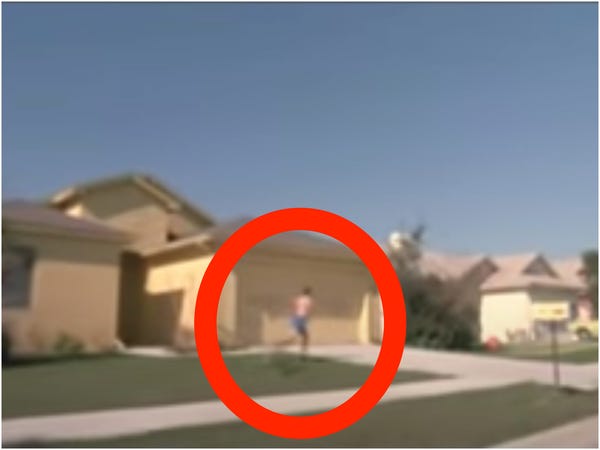 In one of the strangest cameos in movie history, a member of the Backstreet Boys is actually in the final cut of Burton's gothic movie.

Nick Carter, appearing before he was famous as a member of the boy band, is seen briefly as the boy who runs across the front lawn and dives onto a slip 'n slide.

Watch the clip below: 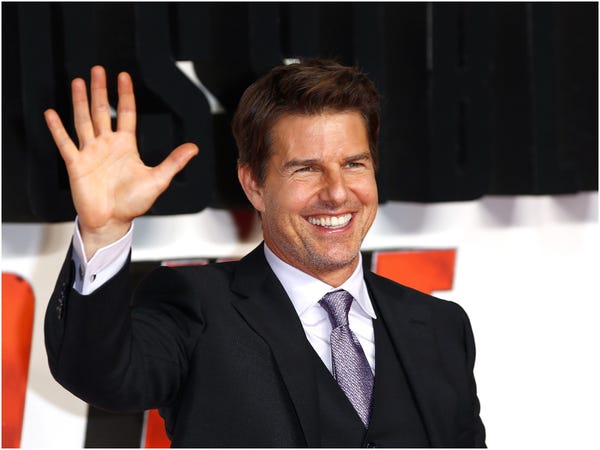 In an almost unimaginable move, 20th Century Fox, the movie studio behind the film, wanted Cruise, who was a better know actor at the time, over Depp. However, director Burton wasn't keen on the "Top Gun" actor.

In the book "Burton on Burton," the director said: "He certainly wasn't my ideal, but I talked to him. He was interesting, but I think that it worked out for the best. A lot of questions came up." 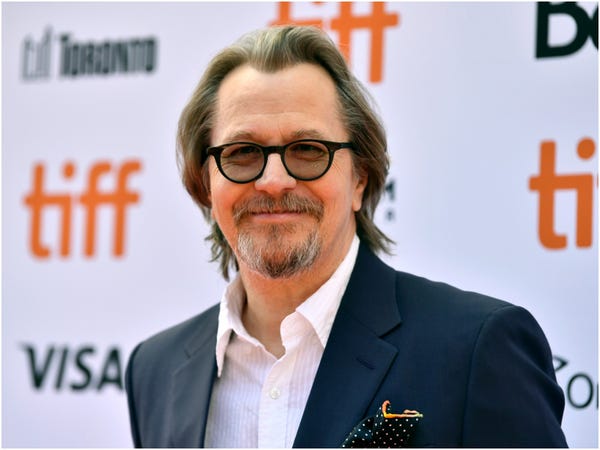 In a 2016 interview with Larry King, Oscar-winner Gary Oldman made the revelation that he was actually approached for the role of Edward, but turned down even meeting the filmmakers.

Oldman said: "I read the script and I went 'It's ridiculous. A castle at the end of this road and then an avon lady comes round selling make up and this kids got scissors hands? This is nuts. I don't get this at all.'"

However, Oldman also stated that once he saw the finished movie, he immediately understood it: "The camera pans over these multi-colored houses in this very sort of suburban neighborhood and then you see the sort of Dracula castle on the hill. Literally two minutes in and I went 'Yeah, I get it.'"

Robert Downey Jr, Tom Hanks, and Jim Carrey were all considered for the role 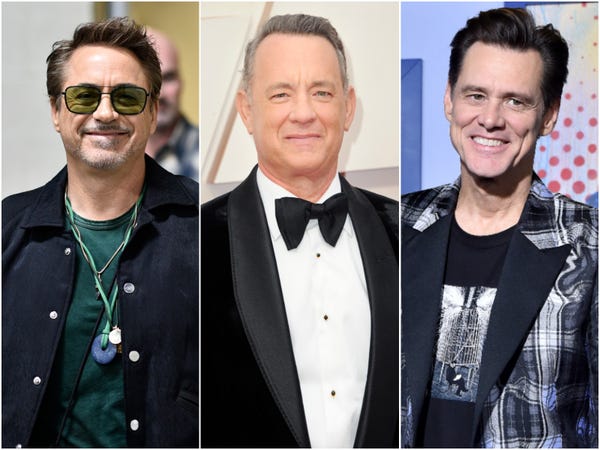 Edward Scissorhands seems to have been the sort of role that was touted for every young actor at the time it was production.

Along with Cruise and Oldman, Robert Downey J.r, Tom Hanks, and Jim Carrey were all considered for the part.

It didn't work out for any of them, but the latter three actors would later go on to play their own iconic characters, including Iron Man, Woody, and the Grinch, respectively. 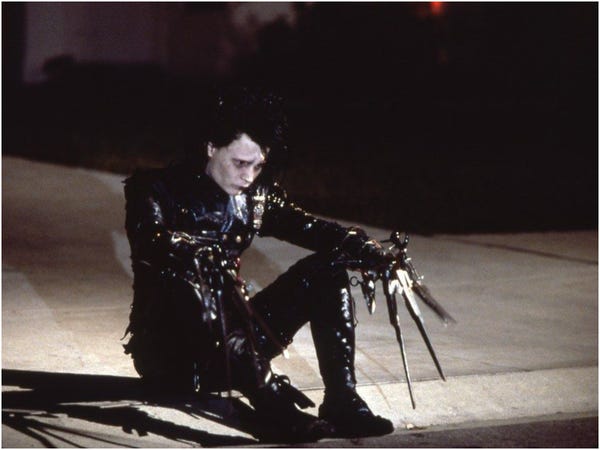 Despite filming in a scorching heat that caused Thompson to get a heat rash, and being dressed in an all-black leather outfit, Depp refused to use cooling agent.

Thompson told Buzzfeed: "There was Johnny in his leather suit, refusing the cooling agent, and soldiering around with his gigantic scissors. It was really amazing and I applaud him for the devotion that he showed."

There were actually reports that Depp passed out from heat exhaustion, but these reports unconfirmed.

The filmmakers paid real-life residents to paint their houses bright colors, and put them up in Disney World during filming 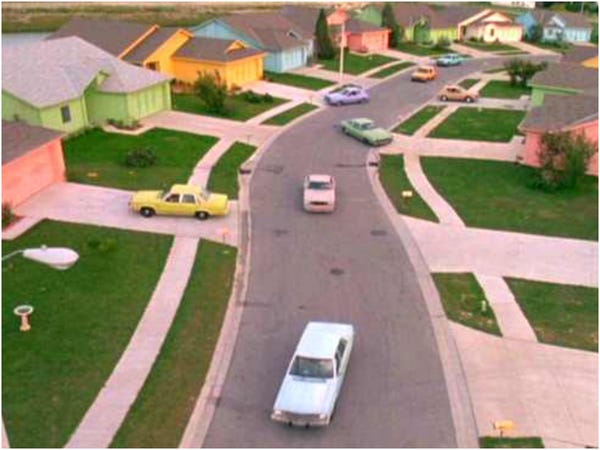 In an interview with The Huffington Post, production designer Bo Welch spoke about the difficulties of shooting the movie in a real-life neighborhood.

"We went door-to-door and got them all to agree to allow us to cut out all of their shrubs and paint their houses," Welch said. "The people were paid money for the use of their yard, and if they wanted to be put up in Disney World or something they could do that during the shoot."

Welch also said that one household was being stubborn and wanted more money before agreeing. But the filmmakers decided to film around their house.

Welch said: "We treated all the houses, painted all of them, did the shrubs and the topiary to every house but theirs, and they eventually realized that we're just going to do it regardless, so they caved in, too. Thank God they did because then we would have been hamstrung by that one odd man out in the center of the neighborhood."

The topiaries were all fake 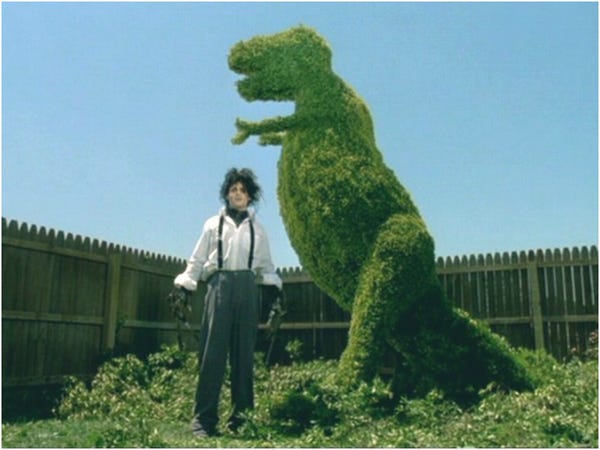 Disappointingly, the topiaries and shrubbery were actually movie magic rather than genuine lawn-keeping genius.

Production designer Bo Welch told The Huffington Post that they designed them in the art department: "They're light-weight steel armatures wrapped with chicken wire and stuffed with artificial greens. They were light enough to move around."

Welch said: "We said, 'OK, how about one is a dinosaur and one is a turtle and whatever?' They tended to be fantastical animals.

But the dog haircuts were actually real 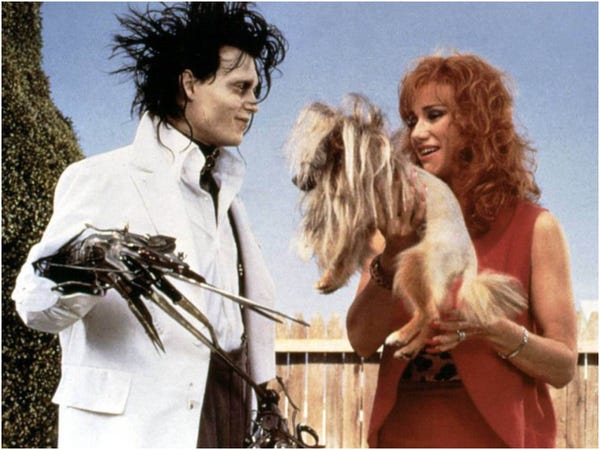 Conversely, the dog's getting haircuts by Edward was actually real.

Watch the scene below:

This was Vincent Price's last film 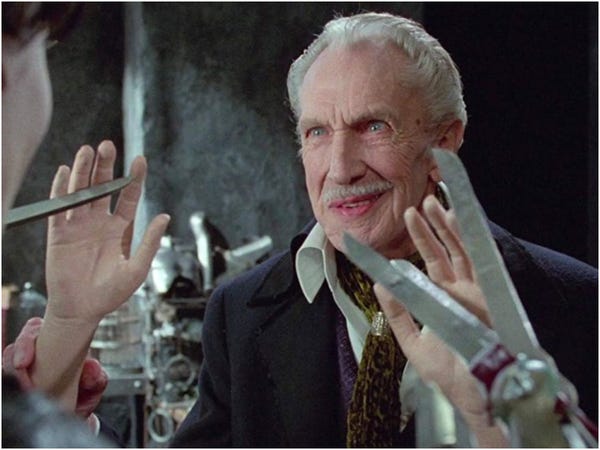 Vincent Price had a gargantuan career, amassing a huge amount of movie and TV credits — 211 to be exact, according to his IMDB page. Price had a big impact on Burton, who idolized him growing up.

Unsurprisingly then, the role of the Inventor was written with Price in mind. Sadly, this role was his last, but what a fitting part for an actor of Price's status to play in a movie directed by the man he inspired.

Price's role was supposed to be larger, but it had to be reduced as he was seriously ill 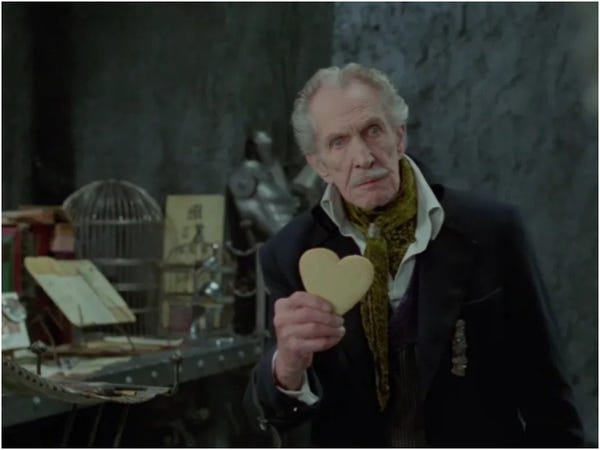 Price's role as the Inventor, who creates Edward, was meant to be significantly larger.

However, Price was reaching the end of his life and was suffering with both emphysema and Parkinson's disease.

This meant that he was unable to carry out an extensive role, so the role was made shorter for Price.

When Peg enters the mansion, the statue behind her looks eerily similar to the Oogie Boogie man from 'The Nightmare Before Christmas' 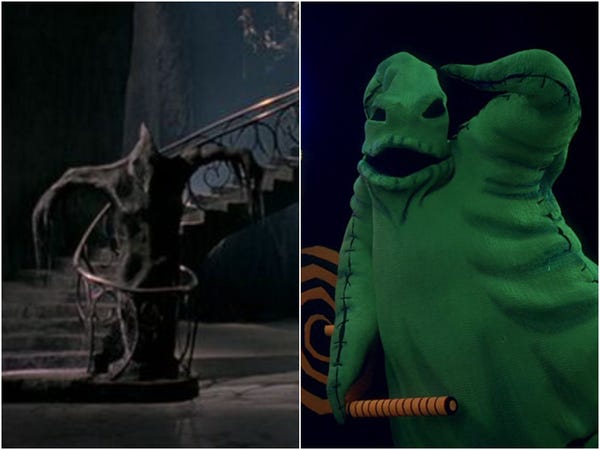 Burton's visual style and use of imagery is one of the most recognizable in movie history, so it's no surprise that there is some overlap in his gothic films.

Here, the statue at the bottom of the staircase looks remarkably similar to the Ooogie Boogie man in "The Nightmare Before Christmas," which Burton produced.

That Halloween/Christmas movie was released three years after "Edward Scissorhands," but the comparison is clear nonetheless.

When Peg drives up to the castle, one of the clouds is shaped like scissors 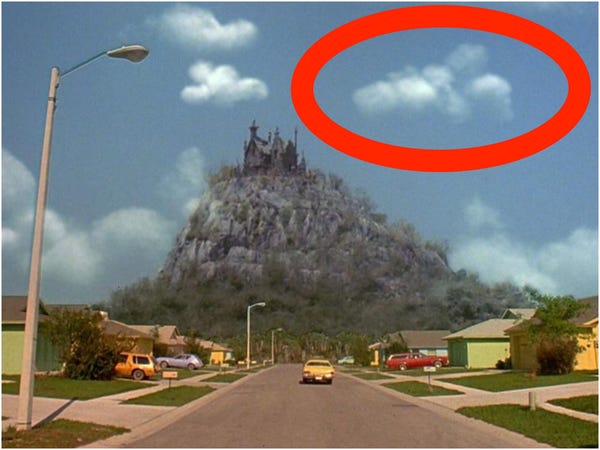 The Dracula-like castle at the end of the colorful suburban neighborhood is one of the best images of the movie, as well as in Burton's entire filmography.

But if you look closer, you can see a sneaky little reference to scissors that makes the image even better.

To the right hand side in one scene, there's a cloud shaped exactly like a pair of scissors. Neat.

Spotify Reveals List Of Most-Streamed Artists Of The Decade

SEBASTIAN SHAKESPEARE: Duchess of Beaufort plans to vote for Corbyn

Cara Delevingne Got a Matching Tattoo For Girlfriend Ashley Benson!