Ever since she released her debut novel, “In the Woods,” Tana French has drawn such a devoted following that it borders on cultish. In the last 13 years, she has published seven novels that won over millions of fans with their twisty, nuanced plots.

But for the last few months, French has been struggling to write. She’s too anxious about the state of the world.

“I’ve realized how much of this gig is your subconscious, and my subconscious, like everybody else’s in the world, is a smoking crater right now,” she said during a video interview from her home in Dublin, where she has been in varying degrees of lockdown with her husband and two daughters. “It’s all used up by dealing with what’s going on around us and trying to process it.”

Fortunately for her millions of fans, French finished a book at the end of February, before the world and her subconscious shut down.

“Pandemically speaking, my timing was pretty good,” said French, who has flaming red hair, wide-set hazel eyes and a striking energy level despite the late hour in Ireland.

Her new novel, “The Searcher,” out on Tuesday from Viking, departs from her earlier work. After writing six mysteries in her “Dublin Murder Squad” series, featuring a cohort of detectives, French has been experimenting with stand-alone novels. “The Searcher” unfolds in a rough, wild landscape where farmers and locals know every bit of each other’s business and are suspicious of outsiders. It is her first book set outside of Dublin and her first to feature an American protagonist — a gruff, retired Chicago police officer named Cal Hooper, who hopes to find peace and quiet in an idyllic Irish village (spoiler: he doesn’t).

With “The Searcher,” her eighth book, French is also venturing into a new genre. Though there’s a mystery at its core, “The Searcher” feels almost as much like a Western as a suspense novel. French never picked up a Western until recently, when she read Larry McMurtry’s “Lonesome Dove” on the recommendation of the journalist and novelist Patrick Anderson. French devoured it and moved on to other dark Westerns, including Charles Portis’s “True Grit” and Patrick deWitt’s “The Sisters Brothers.”

She was fascinated by how morally ambiguous the characters and their actions were. “I love that about Westerns so much, that they don’t try to pretend it can ever be clear,” she said.

French started wondering what would happen if she applied some of that to an Irish village and came up with a classic hero in Cal — a lone stranger who comes to town and disrupts its social fabric, exposing secrets and tangling with local vigilantes.

Veering into Western themes might seem strange for a writer who has built a fan base with her gritty and psychologically acute Dublin suspense novels. French’s books have sold around seven million copies worldwide — close to four million copies in the United States alone — and are published in 37 languages.

But French has always defied easy categorization and flouted mystery genre conventions, even seemingly inviolable ones, like solving the actual mystery.

“With novels in this genre, there’s this desire for breakneck pace and a big twist at the end, and she never felt any pressure to do any of that,” the novelist Megan Abbott said of French. “She takes the classic elements of those story structures, but she’s not buying into any of it.”

French has been called both “our best living mystery writer” and “a mystery writer for people who don’t read mysteries.” Her work has been compared to writers as varied as Thomas Hardy, Ruth Rendell, James Ellroy and Donna Tartt. Among her peers, she’s admired by Marlon James, Stephen King and Gillian Flynn, who has called French’s work “absolutely mesmerizing.” Her novels are often less about solving crimes than examining the aftermath of trauma and the unreliable nature of memory, as well as the social systems and entrenched class disparities that can give rise to violence.

To a degree that is perhaps uncharacteristic for a writer of mysteries, a genre that often demands meticulous planning, French seems to thrive on uncertainty. She concedes that plot is not her strong suit. Rather than mapping out the twists and turns of an investigation, she starts with a character and a setting and feels her way to a story.

“Then I dive in and hope there’s going to be a book at the end,” she said. 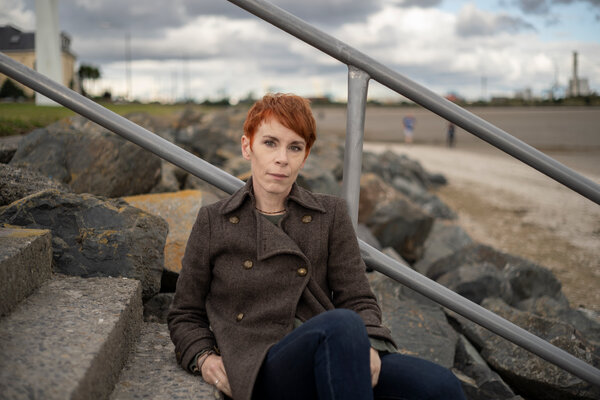 French, who is 47 and has dual American and Italian citizenship, traces her comfort with ambiguity to her nomadic upbringing. Born in Vermont, she grew up on several continents, as her family moved around for her father’s job as a developmental economist — to Florence, Italy; then Washington, D.C.; then Lilongwe, Malawi; then Rome.

Relocating so frequently made her a keen observer of cultural subtleties. “Every couple of years you had to start over, trying to decode a new place,” she said. “Reordering yourself was part of my childhood. It shows up a lot in what I do.” She’s lived in Dublin, where she went to Trinity College, since 1990.

French didn’t start writing seriously until she was 30. For years, she worked as an actor, a career that felt natural for someone who was used to instability.

In 2002, when she was between jobs and found work on an archaeological dig near a forest, a dark thought lodged in her brain: She imagined what would happen if a group of children went into the woods to play, and only one came out. She jotted the idea down on a phone bill but didn’t start writing until a year later.

It turned into her first novel, “In the Woods,” which featured Rob Ryan, a detective whose investigation into a girl’s murder takes him back to the same woods where, as a boy, he witnessed a crime so horrific that he blocked it from his memory.

When she submitted the manuscript to publishers, French was so broke that she struggled to pay her electricity bill. A publisher offered her an advance of around £15,000 (about $20,000) for world publication rights, but she held out and got a better offer, according to her agent, Darley Anderson, who sold the book to the British publisher Hodder & Stoughton for 10 times that initial offer in a two-book deal.

“I’m probably the only person who went into writing for the job security,” French said. “This felt so stable and so secure and so lovely.”

Her debut received ecstatic reviews and several prizes, including the Edgar Award for best first novel. The natural move would have been to follow up with a series, starring the same detective, as many of the genre’s most successful authors, from Agatha Christie to Arthur Conan Doyle to Dorothy Sayers, have done.

Instead, French took a supporting character, Rob’s partner, Cassie, and made her the heroine of her next novel, “The Likeness.” It follows Cassie as she goes undercover to investigate the killing of a young woman who bears an uncanny resemblance to her. In her third book, “Faithful Place,” French plucked out a character from “The Likeness” — Frank Mackey, the detective who put Cassie on the murder case.

French followed with three more “Dublin Murder Squad” books, then surprised her fans with a stand-alone novel, “The Witch Elm.” “It’s very easy to fall in that trap where you know what works for you and you keep writing the same book over and over,” she said.

Recently, she has moved away from detectives as her narrators, both because she wants to keep reinventing herself, and because she started to question their centrality in crime fiction.

“The detective is a symbol of authority and restoration of order,” French said. “What do we say by consistently having that authority figure?”

With “The Searcher,” she probes further at this question and adds the issues of systemic racism and police violence. She was wary at first of writing about police brutality, as a white writer living in Ireland, where killings by police officers are rare.

“I was reluctant to touch on the U.S. side of this at all,” French said. “I’m not convinced that I have any right to speak about that.”

But she felt she needed a reason for why the novel’s retired policeman left America in disillusionment. So she gave him a back story in which he harbors regrets over his role in a near-fatal shooting, when his partner fired at a fleeing Black teenager. After the incident, Cal corroborated his partner’s story that the teen was reaching for something in his pocket, even though Cal didn’t quite believe that.

“I tried to make sure that it was about this guy realizing that his own perceptions were flawed and not necessarily trustworthy, and he could not afford to believe that right and wrong were as simple as he had always wanted them to be,” French said. “The morality involved in his job was much too complex and jagged and all wrong for him to feel like he could do it and be a good person any longer.”

After finishing “The Searcher,” French has been toying with ideas for a new novel, though she said “it hasn’t been easy to have enough brain power to do anything useful.” After experimenting with Western themes, she wants to try her hand at folk horror, in the vein of Shirley Jackson, the author of “The Haunting of Hill House.”

Lately, French has been rereading “vast quantities of Agatha Christie,” which she compared to comfort food. “I know everything will be sorted out in a couple of hundred pages,” she said.

No one would say the same about a Tana French novel.