The Politics of the Common Good: Dispossession in Australia

The Politics of the Common Good arose in response to a speech that Barnaby Joyce gave defending the limited services available to rural communities. Joyce was attending an event at the Tamworth War Memorial Town Hall, a building, Jane R. Goodall notes, constructed by local craftsmen and labourers in 1934. 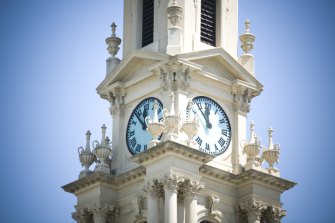 The clock tower of the South Melbourne Town Hall.Credit:Darren James

‘‘Such an initiative would,’’ she says, ‘‘be entirely beyond the resources of most regional councils [today]. They can no longer afford even to maintain and staff the town halls and court houses, the museums, post offices and municipal parks that former generations found the means to construct.’’

How did an infrastructure taken for granted during the Great Depression come to seem almost utopian in the 21st century, particularly after decades of economic growth?

Goodall blames a neoliberalism that measures success through the health of a budget rather than the wellbeing of a community. Against it, she defends the ‘‘commons’’ – an old term for that which belongs collectively to the people.

Modern economic wisdom lauds Garrett Hardin’s famous Tragedy of the Commons, an essay that describes communal ownership as a collective blunder. For Hardin, self-interest necessarily ruins any project not based on competition and private property. 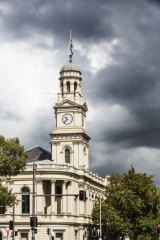 You can find similar formulations in the work of economist Friedrich Hayek or James Buchanan, or the Russian-American novelist Ayn Rand: thinkers who dismiss altruism as delusional or even pernicious, and laud greed as innately virtuous.

But Hardin’s thought experiment involves an obvious circularity, since it takes for granted the competitive individualism it goes on to justify. In the real world, as Goodall explains, the commons has underpinned successful societies stretching back throughout human history. For perhaps 50,000 years, Indigenous Australians collectively maintained their land in an ecological balance – one that private ownership brought undone in a blink of an eye.

In place of the neoliberalism she decries, Goodall finds inspiration in Gerrard Winstanley and the Diggers, a Protestant sect that arose in the 17th century during the English Revolution. The world, said Winstanley, was ‘‘running up like parchment in the fire’’ – and so, before they were dispersed, he and his followers sought to work and live collectively.

Winstanley, Goodall explains, ‘‘saw the state of the earth and the state of humanity as bound together, in service to each other. Such ideas might be readily understood by an Aboriginal elder but they were outlandish and threatening to the English church and state’’. 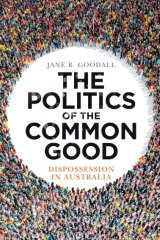 As the passage implies, she sees parallels between the enclosure of the European commons and the subsequent dispossession of Indigenous Australia.

Thomas More memorably described ‘‘sheep devouring people’’ as England’s shared land gave way to private property devoted exclusively to pasture. The newly landless peasants moved to the cities – and many, resorting to crime out of desperation, found themselves transported to Botany Bay, where, once again, sheep and cattle were displacing a collective society.

In other words, as Goodall puts it, ‘‘those responsible for the destruction of Aboriginal heritage brought with them the scars of their own broken tradition, one in which land rights had been cruelly suppressed, and with them a communal heritage that some have traced back to the origins of human life on earth’’.

It’s a fascinating comparison, and one that facilitates productive connections between quite different political traditions.

The book takes seriously the arguments made by Bruce Pascoe, Bill Gammage and others about the intellectual and social achievements of Indigenous society and their value for the future.
But it also looks back to Henry George, the phenomenally popular 19th-century campaigner against land consolidation (fun fact: the board game Monopoly was originally a Georgeist teaching aid) and to the polymath socialist William Morris, with his call to make work ‘‘human, serious, and pleasurable, not machine-like, trivial or grievous’’.

It finds present-day inspiration in the modern co-operative movement, and the rural revival represented by Cathy McGowan and her Voices for Indi group. ‘‘There are no commons without commonality,’’ Goodall says – and, repeatedly, she finds unexpected commonalities.

One might wonder at her use of ‘‘neoliberalism’’ to describe, at different times, a philosophy, a particular era, and the normal workings of capitalism. There’s nothing particularly ‘‘neoliberal’’ about rural dispossession, after all: a measure associated everywhere and always with the development of the factory system.

One might equally wonder at whether the rural commons retains the political importance her narrative accords it, given that, for the first time in history, the majority of humans now live in cities.

But such carping would miss the point.

In a passage cited by Goodall, the Italian Marxist thinker Antonio Gramsci describes the political and intellectual crises that arise as an old order dies and a new one struggles to be born.
In such a context, it’s useful to have a book that undogmatically and sympathetically guides the reader through an array of unfamiliar ideas, in the hope that they provide, in whole or part, a way out of the current mess.

The Politics of the Common Good does not present a manifesto or a particular panacea. But it does make a convincing case that, in the age of climate change, the Earth must – as Gerrard Winstanley put it – become ‘‘a Common Treasury again’’.

Jane Goodall discusses The Politics of Common Good with Bronwen Morgan & Tim Hollo at Gleebooks on August 14 at 6.30pm. gleebooks.worldsecuresystems.com

Jeff Sparrow's most recent book, Trigger Warnings: Political Correctness and the Rise of the Right, is published by Scribe.