MINNEAPOLIS — Look up when you enter Birchbark Books & Native Arts and you’ll spot a handcrafted canoe hanging above the table of current and favorite books.

An intricately carved Catholic confessional hugs a wall, although according to the store’s frequently asked questions page, it was renamed a “forgiveness booth” after it was rescued from becoming a bar fixture.

At Birchbark, located at 2115 West 21st Street in Minneapolis’s Kenwood neighborhood, there is much to see even before you start browsing its stacks and shelves. “It’s one thing to have algorithms keep suggesting the same books to you, but it’s another thing to walk in,” said the store’s owner, Louise Erdrich. “People are looking at you, and you’re looking at actual books, so that you can be inspired and attracted by a physical book.” 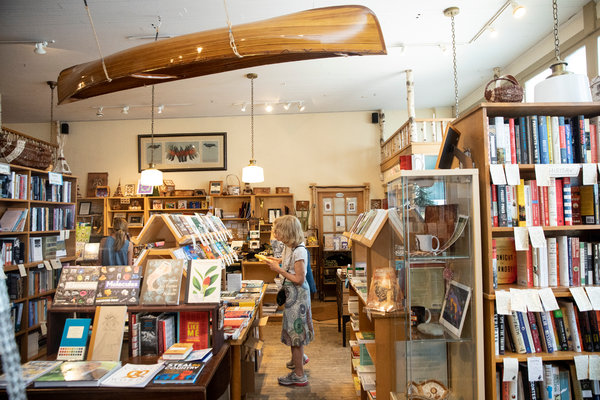 Erdrich, 65, has a wide range of experience with physical books. For one, she’s written many of them: a memoir, children’s books, poetry collections and 15 novels, including “The Round House,” which won the 2012 National Book Award for fiction. An admirer of bookstores with personalities since her college days, she started Birchbark because she wanted to do something with her daughters.

“It was the year 2000, and they were at these great ages where they were very excited about books,” she said. Though she had no idea how to start a bookstore, she jumped in and opened Birchbark in 2001.

The store sells mainstream fiction, nonfiction and children’s books, but Native American titles, crafts and culture are its specialty. Erdrich is a member of the Turtle Mountain Band of Chippewa Indians (her grandfather was its tribal chairman). She gave a shout-out to Native people in Ojibwe during her National Book Award acceptance speech, and her daughter, Persia, is an immersion teacher in the language.

“A large part of our mission has to do with uplifting and supporting Native communities,” Carolyn Anderson, the store’s operations manager, said. “We purchase contemporary and traditional art prints, cards, jewelry, crafts, skin care and food items directly from Native American artists and artisans usually from this region.”

The shop’s décor also incorporates genuine birch trees. As Erdrich recalls, her contractors found a batch of blown-down birches in Wisconsin and transported them by pickup truck to Minneapolis to be put up in the store — much to the confusion of the local avian population.

“We’ve had birds just fly in,” she said. “We’ve had woodpeckers come in and try to figure out why there are trees in the space.”

Many of those resurrected trees can be seen in the store’s loft area, designed as a toy-filled nook where children can play while their adults browse the shelves. On those shelves, Birchbark dedicates a section to keeping indigenous languages alive through learning guides and dictionaries. It mainly stocks instructional materials for Dakota, Lakota and Ojibwe, three tribes local to the region, Anderson said, but also sells pocket-size dictionaries in Cree, Oji-Cree, Dene and Inuktitut.

Anderson, a Diné/Navajo member whose mother went to an American Indian boarding school, feels that the exposure to indigenous culture and community through stores like Birchbark has helped people become more curious and aware of perspectives outside the mainstream. Those resources also provide comfort for Native Americans, she said. “One of those tools for healing is through research, writing, storytelling, learning our traditions, our history and our languages.”

The Birchbark website is managed by the store’s book buyer, Nathan Pederson, selling mostly Native American-related adult and children’s titles for those who can’t make it to Minneapolis. The store supports Native authors through book events, poetry readings and musical performances, often at the nearby Bockley Gallery.

Just below the gallery, at 2101 Penn Ave South, lies a new expansion area for Birchbark. Dubbed The Understory, the space sells graphic novels, L.G.B.T.Q. literature, puzzles and other amusements, all while offering a place to sit and read.

[ Looking to explore the town after a round of shopping? Check out “36 Hours in Minneapolis.” ]

Erdrich, who has a new novel called “The Night Watchman” scheduled for spring, pops into the store occasionally, but she leaves the day-to-day business to Anderson, Pederson and her other colleagues. When she’s not writing her own books, she does take time to contribute to Birchbark’s handwritten recommendations, taped to shelves all over the store.

“That’s the thing about bookstores,” she said. “Bookselling becomes a way of life and something you do as a human being.”

J.D. Biersdorfer has been answering technology questions — in print, on the web, in audio and in video — since 1998. She also writes the Sunday Book Review’s “Applied Reading” column on ebooks and literary apps, among other things. @jdbiersdorfer

‘The Glorious American Essay,’ From Benjamin Franklin to Zadie Smith