Home » Books » When the World’s Most Famous Mystery Writer Vanished

It was like a plot from one of her own novels: On the evening of Dec. 4, Agatha Christie, carrying nothing but an attaché case, kissed her daughter good night and sped away from the home in England that she shared with her husband, Col. Archibald Christie. (He was having an affair with a younger woman; the public did not know this, but his wife definitely did.) No one knew where Christie was for almost two weeks.

Christie was 36 at the time and had already published several detective novels, including “The Secret Adversary” and “The Murder on the Links.” Her disappearance merited banner headlines the world over, making the front page of The Times on Dec. 6.

“The novelist’s car was found abandoned near Guildford on the edge of a chalk pit, the front wheels actually overhanging the edge,” the paper reported. “The car evidently had run away, and only a thick hedge-growth prevented it from plunging into the pit.” 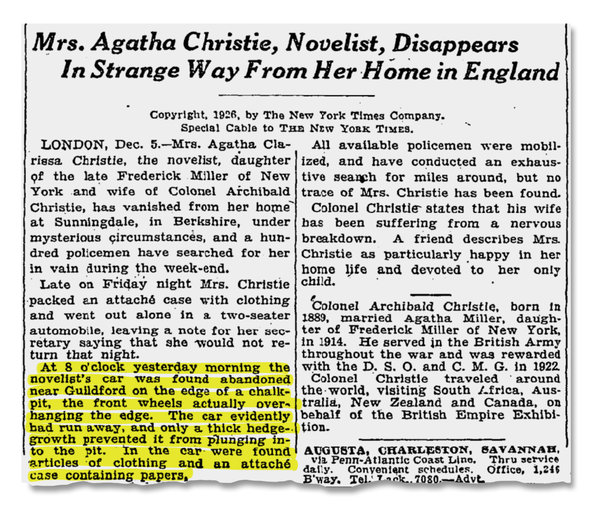 After three days of searching for the novelist, the police called it off. They said Christie’s brother-in-law had received a letter from her, saying she was going to a Yorkshire spa “for rest and treatment.” Case closed, right? Not quite.

[ In Agatha Christie’s books, “she captures something elemental about mysteries: that motive and opportunity may suffice for a crime, but the satisfying part is the detective’s revelation of whodunit, how and why.” ]

The police, apparently unconvinced by the letter, expanded their search, even bringing one of Christie’s pets to the scene to see if he could track his owner’s scent. (The dog just “whined pitifully.”)

Detectives “are now said to be of the opinion that it is a case of suicide,” The Times reported. The search seemed to center on a pond called “the Silent Pool,” which, according to local legend, was bottomless.

There was an especially tantalizing detail near the end of the story: Christie, the paper claimed, had been spooked by her own house. “It stands in a lonely lane, unlit at night, which has a reputation of being haunted. The lane has been the scene of a murder of a woman and the suicide of a man. … ‘If I do not leave Sunningdale soon, Sunningdale will be the end of me,’ she once said to a friend.”

A week after Christie’s disappearance, the police were flummoxed. “No reliable witness has seen her since the night she left her house in Sunningdale a week ago,” The Times reported.

But there was one important development. Christie had left three letters behind: one to her secretary, another to her brother-in-law and a third to her husband, who refused to divulge what she had written.

Detectives appealed for help from motorists and amateur sleuths: “Without telling why, the police still believe she is somewhere on the downs … not far from the spot where her missing automobile was found.”

In the same article, her personal secretary angrily denied that the whole thing was a publicity stunt: “It is ridiculous. Mrs. Christie is quite too much a lady for that.” The secretary also handed over the note Christie had left for her, saying it contained only scheduling details.

The police, scrambling for clues, turned to Christie’s manuscripts, examining what they thought was her work in progress, “The Blue Train.”

Between 10,000 and 15,000 people took part in the search for Mrs. Christie, aided by “six trained bloodhounds, a crate load of Airedale terriers, many retrievers and Alsatian police dogs, and even the services of common mongrels.”

That same day, the police speculated that Christie could possibly be in London, “disguised and probably in male attire.” And rumors began flying that she had left behind a sealed envelope that was only to be opened in the event her body was discovered.

Spiritualists even held a séance at the chalk pit.

The paper reported that the police had found some important clues nearby, including “a bottle labeled poison lead and opium, fragments of a torn-up postcard, a woman’s fur-lined coat, a box of face powder, the end of a loaf of bread, a cardboard box and two children’s books.”

Perhaps more ominous, was the detectives’ new theory: “The police have information which they refuse to divulge and which leads them to the view that Mrs. Christie had no intention of returning when she left home.”

The novelist was found at a Yorkshire spa, nine days after she disappeared.

Her husband informed reporters, “She does not know who she is … she has suffered from the most complete loss of memory.”

The Times reported that Christie had checked in to the Harrogate spa under the name “Mrs. Tressa Neele.” When asked, Col. Christie insisted he had no idea what the meaning of that particular name was — nor, he added, did his wife. Years later, it was revealed that Agatha Christie had, in fact, used the name of her husband’s girlfriend.

When Col. Christie showed up in Harrogate to collect his wife, he was “welcomed by her with a stony stare.” Later, hundreds of people showed up at a London train station as the couple made their way home, hoping to catch a glimpse.

In the same piece, the paper noted that “hundreds of amateur detectives were today putting away their lynx eyes, gum shoes and Sherlock Holmes pea jackets and resting from their weary trampings over the Surrey Downs.”

The next chapter in the saga took place about 15 months later, when Agatha Christie sued her husband for divorce.

Two years after her divorce, Christie remarried. (So did Archibald Christie: His new wife was none other than Miss Neele.)

Over 90 years later, biographers and historians are still debating what happened during those days in 1926. Was it revenge, depression or amnesia? Recent biographies, like one by Laura Thompson, shed little light on the episode. (“It was the unspoken subject. Agatha refused to talk about it. To anyone. It was a real no-go,” one of Christie’s friends told Thompson.)

Christie herself discussed the incident publicly only once, in a 1928 interview she gave to The Daily Mail. She told them she had been driving past a quarry on Dec. 3, 1926, when

… there came into my mind the thought of driving into it. However, as my daughter was with me in the car, I dismissed the idea at once. That night I felt terribly miserable. I felt that I could go on no longer. I left home that night in a state of high nervous strain with the intention of doing something desperate. … When I reached a point on the road which I thought was near the quarry, I turned the car off the road down the hill toward it. I left the wheel and let the car run. The car struck something with a jerk and pulled up suddenly. I was flung against the steering wheel, and my head hit something. Up to this moment I was Mrs. Christie.

She did not talk about what happened in “Agatha Christie: An Autobiography,” either, dismissing the end of her marriage in a few terse words: “There is no need to dwell on it.”

The episode continues to fascinate. In 1977 Kathleen Tynan wrote a novel, “Agatha,” about the episode; it was turned into a film starring Vanessa Redgrave. In 2008, an episode of “Dr. Who” speculated about the novelist’s disappearance. And more recently, a British made-for-TV film, “Agatha and the Truth of Murder,” offered a new theory: Christie disappeared in order to take part in a homicide investigation.

‘The Zealot and the Emancipator,’ by H.W. Brands: An Excerpt