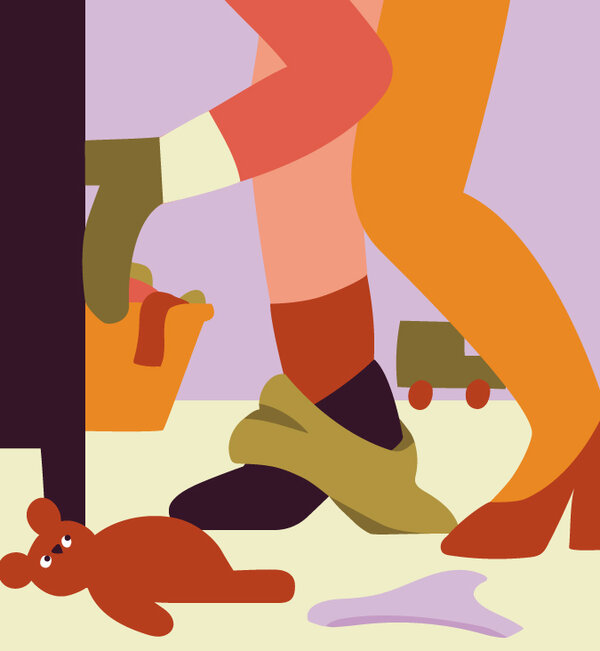 Critics are supposed to identify conflicts before they review a book. When I learned that “Look at Us,” by T.L. Toma, was a novel about a wealthy couple who embark on a sexual misadventure with their au pair, my conflicts were that I had spent most of the last year trying to work with insufficient child care and that I believe the au pair system to be counterrevolutionary and rife with labor violations. I am, in one sense, an ideal person to review this novel. I am, in another, conflicted.

“Look at Us” is Toma’s second novel; his first, “Border Dance,” was published in 1996. This new offering stars Martin Fowler, a mathematical physicist turned analyst who tracks foreign currencies. His wife, Lily, is an intellectual property lawyer. They make a lot of money, enough for Caribbean vacations and full-time child care of their young twin boys.

When their beloved nanny moves away, Martin and Lily are connected, via their local street-cart vendor, with Maeve, a young woman from Ireland. But Maeve isn’t just looking for a job. “It is only toward the very end of their conversation — after discussing the hours and the pay — that the Fowlers realize she expects to live with them.” Martin and Lily make over a storage room for her, and Maeve begins working as an unregistered au pair, taking the twins’ care in hand, as well as the cooking, the cleaning, the evening conversation. Soon she takes on a role in Martin and Lily’s bedroom, fulfilling a peculiar function in their sex life. Things unspool in ways both predictable and unexpected.

The novel’s perspective hews closest to Martin, and to a lesser extent, Lily, peeking only very briefly at Maeve’s point of view. Lily is a child of both privilege and abuse, and is sexually reticent until the arrival of Maeve. Martin is midlife, unmoored and frustrated, primarily because of his wife’s timidity. They are unlikable, Toma wants us to know, but in a muted, unflashy way.

Martin spends a lot of time imagining the exotic, yet in his view more authentic, lives of the less privileged people around him — his building super, for example, an Estonian immigrant who, Martin observes, carries an “odor of garlic and tobacco,” and the super’s wife, whom Martin imagines to have a “rich woody boscage” of a vagina. These essentialized fantasies are often connected with sex and are, predictably, even more distasteful when the people he’s describing aren’t white — after watching a documentary about Mexican pearl divers, he concludes that their modest shacks were a fair trade for their lovers, “women who took pleasure in the pleasure they could give a man.” Later he fantasizes about being with his own “dusky woman.”

The novel gestures at social satire but never really cracks a smile, falling into an uneasy spot between arch realism and allegory that may occasionally leave readers wondering whether a stereotype is being critiqued or simply reinforced.

This is a slippery, hypnotic and aggravating book. It is often beautifully written — Martin’s fraught looks with women “continue to rise in his memory like lit obelisks at night” — and Toma is astute in his depictions of human foibles. Although we are given little sense of Maeve’s reality or her motivations for joining this ménage à trois, the novel overall is frank and unflinching about desire, sexual dysfunction and the gulfs that can separate even the most intimate of partners.

But it is freighted with obfuscating symbolism, as when Martin courts infidelity with a blind woman he meets at a charity event, or when he fixates on Maeve’s Celtic tattoo during sex. At times the novel cries out for a lighter touch. Long investment in detailed character development and exposition wind up with, in Lily’s case, the oldest cliché in the mean boss handbook: an accusation of theft. The novel’s violent, outré finale feels both portentous and disjointed from the other events of the book.

Ultimately, this novel about the sexual problems and spiritual malaise of the au-pair-having rich feels as if it is trying to say something big about sex, class, masculinity and modern life. It’s a daring effort and a worthwhile pursuit but, harried pandemic mom that I am, I was mostly too tired to care.

How the Animal World Is Adapting to Climate Change