It’s a peaceful domestic scene on a Sunday in Los Angeles, 1941: 4-year-old George helps his father trim the tree, as carols curl out of the radio. Mother nurses a baby, while another tot plays with a train set. Before “Silent Night” ends, though, the program comes to a jarring halt, with news of Japan’s surprise attack on Pearl Harbor. President Franklin D. Roosevelt immediately declares that all Japanese in the United States must register as “alien enemies.” The next day, Dec. 8, America enters World War II.

By the following autumn, as a result of Executive Order 9066 the family will be on a real train, tagged “like cattle” and bound for Fort Rohwer, Ark., the easternmost of the 10 internment camps established by order of President Roosevelt. “I thought everyone took vacations on a train with armed sentries at both ends of each car,” George remembers later. “It was an adventure.”

George’s family, of course, is Japanese-American — his mother born here, his father unable to apply for citizenship despite living in the country for a quarter-century. And George will grow up to be none other than the “Star Trek” actor George Takei, now 82. His new graphic memoir, THEY CALLED US ENEMY (Top Shelf, 204 pp., $19.99), gives a detailed, wrenching account of what happened to thousands of Japanese-Americans in the wake of Pearl Harbor. The experience has been evoked powerfully in works such as Julie Otsuka’s beautifully spare “When the Emperor Was Divine,” John Okada’s “No-No Boy” and Miné Okubo’s “Citizen 13660,” a 1946 memoir in proto-comics form, each page divided between expressive illustration and text. But with its evocation of Takei’s childhood, “They Called Us Enemy” should prove the most potent introduction for younger readers to this ignoble chapter in our history. The book touches on the highlights of Takei’s long career, but it’s movingly clear that his artistic and moral compass was formed by his childhood incarceration in Arkansas, as well as in two camps in California.

Takei is arguably one of the most recognizable Asian-American figures alive. If his role as Sulu in the original “Star Trek” series (which ran for three years in the late ’60s, then in eternal reruns) could feel underwritten, at least he was there — a competent, brave, respected member of the Starship Enterprise, with its mandate to boldly go where no one has gone before. Early in the book, Takei connects this spirit of adventure to the story of those like his parents living in America in the early 20th century, puzzling out how to survive and thrive in a land where they were literally marked as aliens.

Their American story takes a dark turn after Dec. 7, and the ironies of their unjust displacement could serve as plot material for a whole season of that space opera. 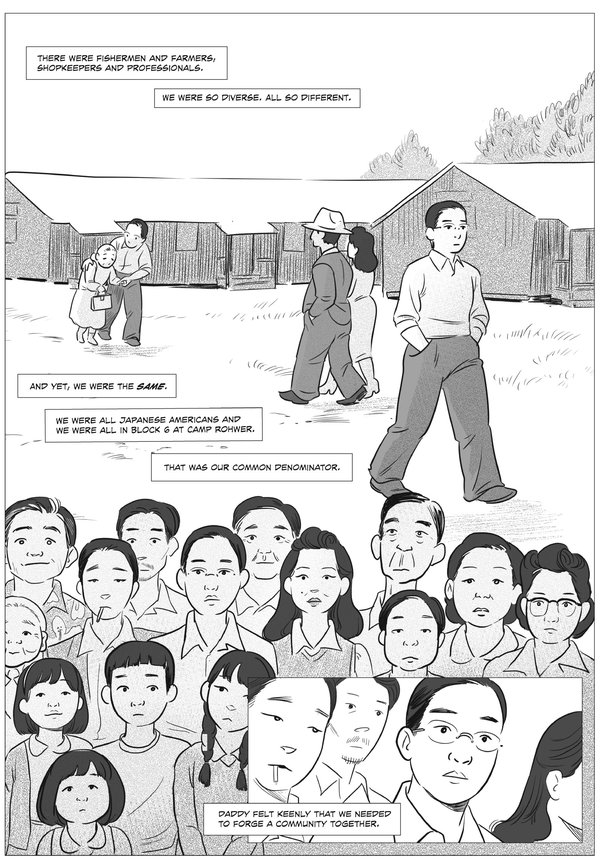 From “The Called Us Enemy”

When the kids play soldier, no one wants to be the “Japanese cowards,” preferring to act as the “American” soldiers, even though it’s America that’s whisked them from their comfortable homes to a cramped village of stifling cabins, hemmed by barbed wire. Much later, when Takei and his father pitch in for Adlai Stevenson’s 1952 presidential campaign, a grateful Eleanor Roosevelt is scheduled to swing by. George is excited, but his father stays home sick. It gradually dawns on George why his father might want to avoid someone whose husband destroyed all that he had built up.

There are some glitches, maybe the result of too many cooks (Justin Eisinger and Steven Scott get co-writing credits). When Takei’s father, sometime in the ’50s, tells him that democracy is “existentially … dependent on people who cherish the shining, highest ideals of democracy,” it sounds canned — unless I’m mistaken, people didn’t reflexively use existential in this way until recently. That the phrase “shining ideals of our democracy” appears five pages earlier also dulls the point. The book’s framing device — an older, famous Takei explaining to an audience — shifts too much: Are we listening to Takei speak at a TED Talk in 2014, or at the F.D.R. Museum in 2017, or at ComicCon?

But the power of the story remains pure, and Hope Becker’s clear, empathic drawings (with some manga-inspired touches) evoke the human toll of the camps, while ably conveying the greater historical forces at work. “They Called Us Enemy” includes numerous clips of Takei’s social activism, and ends on a note of filial piety. But before it does, there’s a chilling sense that the lessons of the past have been unlearned, in this age when the highest authorities in the land continue to target some ethnic Other.

“Above all, Goya wants us to look upon extremity without turning away,” my co-columnist Hillary Chute has written, about the 19th-century Spanish artist’s series “Disasters of War.” Two centuries later, the Korean manhwa artist Keum Suk Gendry-Kim has taken up this aesthetic challenge, forcing us to bear witness to the forced sexual slavery of Korean women and girls by the Japanese Army, during the time (1910-45) when the peninsula was ruled from Tokyo.

In the harrowing GRASS (Drawn + Quarterly, 480 pp., $29.95), Gendry-Kim appears as herself, racing against time to interview the octogenarian Ok-sun Lee. “I’ve never known happiness from the moment I came out of my mother’s womb,” a wrinkled “Granny” Lee says, and by the time this dark book ends, those words read more as understatement than exaggeration. Born into poverty in 1928, Ok-sun was a feisty girl who wanted more than anything to go to school; when her parents suggest that a more well-to-do couple adopt her, she agrees to go. “I’m gonna study hard and help you get better,” she says to her ailing father. But Ok-sun never sees her family again, and it becomes painfully clear that education will never be hers. She’s sold again, to work at a tavern; in 1942, at age 15, she gets abducted and shipped off to a Japanese-occupied province of China.

With other girls — all of them stolen or duped — she toils in the fields, but then the soldiers arrive. About 200 pages into this nearly 500-page threnody, Ok-sun is raped by the first of hundreds of Japanese soldiers. Gendry-Kim’s forceful art, with its wild lines and dense black, plunges fully into the realm of nightmare. We see the men in silhouette, each face just a pair of leering eyes and a set of demonic teeth. The girls huddle in the top half of the room, across the top of two blackened pages, while the men are framed by a doorway that’s somehow emerging from the floor, as though stepping out of hell, a daring distortion that signals a further twist in the girls’ already grim reality. The next two pages are as heart-stopping as any comics I’ve seen. They depict nothing less than the death of a soul.

Ed Park writes the Graphic Content column and is the author of “Personal Days.”

That book was great … what was it called again?

Ariana Grande Links Up With BTS at Grammy Rehearsals, and Hey, How About a Collab?
TV News