Home » Books » What we can learn from chimpanzees and wolves

Mama’s Last Hug: Animal Emotions And What They Teach Us About Ourselves

The Wisdom of Wolves: How Wolves Can Teach Us To Be More Human

Mama’s Last Hug and The Wisdom of Wolves demonstrate convincingly how by empathising with animals we humans may learn more about how to treat each other with kindness and understanding.

Since time immemorial, humans have justified wholesale exploitation of animals by denying them emotions. ‘‘Clearly, we don’t treat them well, at least not most of them,’’ writes Frans de Waal. ‘‘It’s easier for us to live with this fact by simply assuming that animals are dumb automatons devoid of feelings and awareness, as science has done for a long time.’’

It comes as no surprise to learn from de Waal that the least popular book by Charles Darwin is the one he wrote on the emotional life of animals. 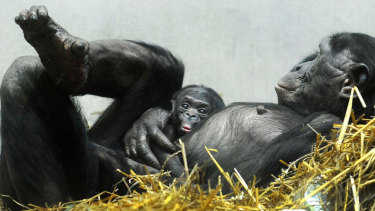 De Waal points out in Mama’s Last Hug that humans are the most empathetic species as well as being the cruellest. Those people who do genuinely care about animals know that their non-human companions have desires, moods and personalities, and that they feel pain and pleasure, joy and sadness, hope and despair.

We know that emotions affect us physically, and we can see that animals are the same in that respect. This is no less true of farm animals than any other kind, and yet we routinely do terrible things to them on an industrial scale. Few people, it seems, are interested in knowing where the meat they buy at the supermarket has come from. 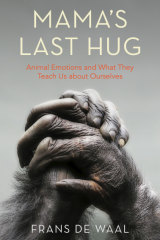 Frans de Waal says the true leaders among chimpanzees will not necessarily be the strongest.Credit:

Despite all the advances in our understanding of other species, there remain highly credentialed specialists who maintain that animals have limited intelligence. ‘‘Foresight, spatial orientation, anticipatory behaviour and other qualities previously attributed only to humans have now been identified in all living creatures,’’ notes Elli H. Radinger. ‘‘And yet the existence of emotions in animals is still not universally accepted.’’

Perhaps the empathy gap that exists in relation to our treatment of animals will not disappear until we learn to communicate with them, assuming it is not too late to talk in the case of the many species facing extinction. Among the most endangered animals right now are elephants, a species with a brain that consists of three times as many neurons as our brain and whose language we are only just beginning to try to understand.

In recent times, a movement towards treating animals with greater dignity and respect has emerged in different parts of the world. In Australia – where live animal export and greyhound racing have been banned and unbanned, while duck shooting is illegal in some states and remains legal in others – we have a very long way to go.

Notwithstanding the lack of acceptance among certain scientists and various political leaders, Radinger, a German wolf expert, and de Waal, a US-based Dutch primatologist, are here to tell us that animals exhibit emotional lives as rich and varied as ours. De Waal and Radinger know this to be true because each of them has spent decades looking at animals as individuals rather than viewing them merely as moving scenery. Sometimes humans forget how much we can learn about the world around us just through patient observation.

In contemplating the sheer playfulness of wolves, Radinger affirms that no matter what the textbooks may say about animals being merely instinct-driven survival machines, ‘‘the reality looks different’’. She marvels at just how much time wolves spend in what looks like idle play, when they must also work very hard in order to get enough to eat. 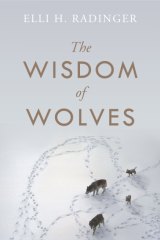 Radinger gave up her career as a lawyer in Germany to study wolves that live in Yellowstone National Park, a vast wildlife sanctuary ringed by eager hunters ready to kill any wolf that happens to stray outside its boundary.

She tells fascinating tales of the complex society of wolves – how, like humans, wolf offspring take a long time to become fully mature and require nurturing by their parents and relatives. Much of a young wolf’s education has to do with emotional intelligence, learning how to recognise and respond to the behaviour of others as well as manage their own impulses.

De Waal agrees with Radinger that wolves, elephants, dolphins and countless other species are just as sophisticated socially and sensitive to others as we are, if not more so. He confirms that wolves and other large-brained animals spend as much time resolving conflict as we do, and they go about it in similarly measured and thoughtful ways.

Radinger acknowledges that predators such as wolves must kill but only in order to survive in the wild and feed their families: ‘‘Nature isn’t a Disney movie, even if that is how we’d like to think of it. Death can sometimes be bloody and horrific. Much crueller, in my view, are factory farming and animal transports.’’

Cruel also are those humans who have no need to hunt for food and are not threatened by wildlife yet perversely enjoy killing animals such as wolves for so-called sport. Hunters have killed more than one of the Yellowstone wolves of whom Radinger had grown most fond.

For his part, de Waal acknowledges that chimpanzees – in particular, bored adolescent males – are capable of wantonly cruel behaviour towards other species as well as acts of extreme violence towards each other. But mature chimps appear capable of self-reflection, sensitivity and remorse.

According to de Waal, the true leaders among male chimps – and, for that matter, male wolves – will not be the strongest and most aggressive. “The primate alpha male is a much more complex and responsible being than just a bully.” What is more, among large-brained species females typically play an equal if not dominant role in the life of the group. 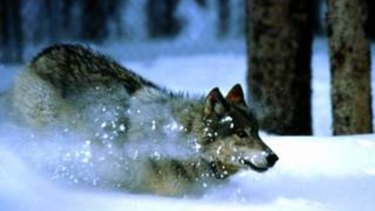 Elli H. Radinger says the female wolf is at the centre of everything.Credit:Washington Post

Within a wolf pack, Radinger writes, females are at the centre of everything. ‘‘In a wolf family the parents decide together, but the really important decisions – such as how, when and where the pack goes hunting, or where the natal den is dug – are made, both by humans and wolves, by the highest-ranking female.’’

For their part, chimpanzees can remember and honour human kindness, as was demonstrated by Mama, a 59-year-old matriarch who appears in a video that went viral in 2016. Just before she died, Mama was visited by Jan van Hoof, an elderly primatologist who had known Mama her entire life. What made the scene so tender was the evident concern on the part of the ailing Mama to comfort the visibly distressed van Hoof.

Mama seemed overjoyed to be with her old friend one last time. De Waal movingly describes how the dying chimpanzee ‘‘gently strokes his hair, then drapes one of her long arms around his neck to pull him closer. During this embrace, her fingers rhythmically pat the back of his head and neck in a gesture that chimpanzees also use to quiet a whimpering infant.’’

‘‘This was typically Mama,’’ writes de Waal. ‘‘She must have sensed Jan’s trepidation about invading her domain, and she was letting him know not to worry. She was happy to see him.’’ In that moment, any consciousness of the two of them belonging to different species appeared to dissolve.

‘‘Theirs was an encounter between two members of related species who had known each other a long time and respected each other as individuals.’’

These two books are essential and indeed mind-expanding reading for readers who know that the lives of animals matter. Reading Mama’s Last Hug and The Wisdom of Wolves should also be urged upon anyone still clinging to the outdated, self-serving notion that animals can have no inner life worthy of our consideration and compassion.