Home » Books » What Samantha Power Learned on the Job

THE EDUCATION OF AN IDEALIST
A Memoir
By Samantha Power

Whenever The New York Times invites me to do a book review, I look for an excuse. I’d rather spend my extra time writing books than reviewing them. But when the Book Review editors asked me to review Samantha Power’s “The Education of an Idealist: A Memoir,” I said yes, without hesitation. It wasn’t because I suddenly had time on my hands. And it certainly wasn’t because Power is a friend. I’ve met her only once — in her last week as Barack Obama’s ambassador to the United Nations. No, it was because I knew only one thing about Power — from afar. She was a table-pounding idealist and human rights advocate, and believed in using American power to protect innocent civilians and advance democracy. And lately I have struggled with that position.

Having been a foreign correspondent in London, in Beirut during its civil war, in Israel and then the foreign affairs columnist for this newspaper since 1995, I’d long wrestled with how much idealism one should allow oneself when advocating for or against the uses of American power abroad. I began reporting from the Middle East in 1979 with a lot of Minnesota optimism in my DNA. Alas, idealism is now a recessive gene in me after so many crushed hopes and covering one-too-many massacres. I am much more wary today — not isolationist, but wary — about what well-intentioned outsiders can do to sustainably reshape another country or region.

The only Arab Spring country that was able to make the transition (albeit still tentative) from dictatorship to democracy, and to power-sharing between Islamists and secularists, was Tunisia — the one Arab country America had nothing to do with. Think about that. And Burma’s Aung San Suu Kyi showed how even a Nobel Peace Prize can’t guarantee that today’s human rights heroine won’t become tomorrow’s victimizer. Yet Obama’s intervention in West Africa to stem the spread of Ebola — maybe his most significant foreign policy achievement, for which he got little credit precisely because it worked — demonstrated that without America as quarterback, important things that save lives and advance freedom at reasonable costs often don’t happen.

So I was curious. This Samantha Power — she had started her career as a journalist covering the mass killing of Bosnian Muslims by Serbs, which led her to write a Pulitzer Prize-winning book, “‘A Problem From Hell’: America in the Age of Genocide,” about why American leaders who vow “never again” repeatedly fail to halt genocides. She had worked as a foreign policy adviser to Senator Obama, and then as a human rights adviser to President Obama before ultimately becoming his second United Nations ambassador.

People told me she was a real idealist — not a tortured one like me. But then she had to eat some heaping plates of realism in public, like defending Obama’s nonintervention in the genocidal Syrian civil war. I wondered: How did she wrestle with all that as she went from reporter-author to policymaker? So I told the Book Review editors: “Yes. I’d like to review her book.” I wanted to see how she sorted it all out.

I’m glad I did. This is a wonderful book.

The book isn’t all about world affairs. One of the most compelling chapters is about when Power joined the Obama presidential campaign as a foreign policy adviser but ended up making news herself for a “large and public mistake.” That was describing Obama’s rival, Hillary Clinton, as a “monster” — while on a book tour in Ireland no less — and being forced to resign from the campaign. But when the man that her Irish cousins called “O’bama” wins the 2008 election, he brings her back into the fold.

To ease her way back, her friend and the Obama adviser Richard Holbrooke — as a wedding gift — arranges for Power to have a private face-to-face meeting to apologize to Clinton and clear the air. When Power tells Obama about the “wedding gift,” the president quips, “Don’t most people get toasters?”

With America being run today by a president for whom no dictator is too odious to call his friend, I found it something of a balm to journey with this Irish immigrant girl from the basement of a Dublin pub, where Power spent way too much time as a little girl reading books while her dad held court in the bar upstairs, to America, where she emigrates with her mom in the 1970s and falls in love in equal parts with the Pittsburgh Pirates and American idealism. Not the cheap flag-waving variety, but the belief that America is more than just a country. It’s a mission to promote justice and human rights where it can.

When it comes to striking that right balance between idealism and realism, this book is basically a dialogue between the young, uncompromising, superidealistic Power — who cold-calls senior American officials at night at home to berate them for not doing more to stop the killing in Bosnia — and the more sober policymaker Power, who struggles to balance her idealism with realism, and who frets that she’s become one of those officials she despised. 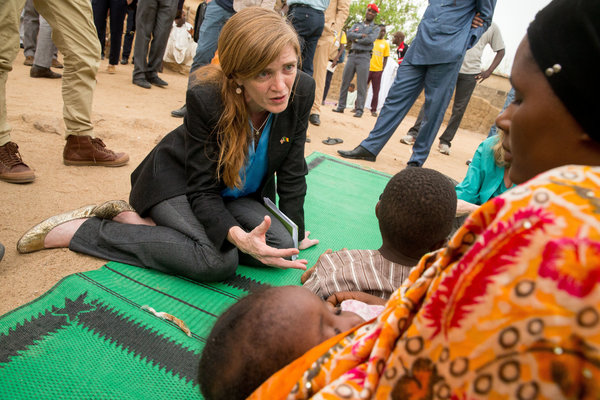 The older Power is not at all a cynic, but she is less ramrod straight. Her posture is what I like to call a tilt. Always tilted toward using American power to defend the defenseless, moderate the tyrannical, rescue the needy and inspire and strengthen the forces of decency — but when she loses the argument to do so in one country, she doesn’t resign. She looks for somewhere else to fix.

Does that sound like an idealist selling out to hold onto the perks of power, or one who keeps looking to fight another day another way? You decide. And you can — because Power is unstinting in giving you all the ammunition you need to denounce or defend her.

[ This book was one of our most anticipated titles of September. See the full list. ]

Drawing often from her journals, she shares what colleagues and friends saw, at times, as her annoying self-righteousness. The young Power that we meet early on is in Sarajevo berating herself in her journal for not personally preventing the 1995 murder of some 8,000 Bosnian Muslim men and boys in Srebrenica: “I was the correspondent in Munich while the bodies burned in Dachau. … I had power and I failed to use it.” Writing now, she says, “In beating myself up, I was clearly exaggerating my actual power back in Sarajevo.” (I’d say so!) She quotes the American diplomat Jonathan Moore, who advised her on the choice of continuing to report from Bosnia in hopes of changing policy or going to Harvard Law School: “Get the hell out of there. You need to break out of the compulsion for power, glory, ego, relevance, contribution.”

The elder Power takes you on the roller coaster ride of being the leading in-house advocate for idealism on the Obama team. Power argued for intervention in Syria, at least for a no-fly zone that might have tilted the balance of power there enough so the Syrian regime would negotiate with the pro-democracy rebels. But Obama overrules her, fearing an endless quagmire. We don’t know what would have happened had Power’s advice been taken. All we know are two things: 1) America was spared getting deeply involved in another Middle East internal struggle without a clear exit strategy, and 2) our absence helped the Russians, the Iranians and the Syrian regime crush the rebels and produce a flood of refugees into the European Union that led to a populist-nationalist backlash there that contributed to Brexit and weakened the E.U.

In Libya, Obama took the advice of Clinton, Power and our NATO allies and helped to decapitate the regime of Muammar Qaddafi — to prevent him from killing large numbers of antiregime Libyans. But when we and the Europeans failed to organize a follow-up peacekeeping force on the ground, Libya descended into disorder, unleashing another destabilizing refugee flow into Europe. Obama’s team and our allies had willed the ends without willing the means. Idealism untempered by an understanding of the complex interplay of forces inside a country ends up in this sort of mess.

During these various debates about Libya and Syria, Power quotes Obama as snapping at her when he felt her comments came across as “dogmatic or sanctimonious.” During a Situation Room debate on Syria, as Power was advocating for stronger action, Obama wearily says to her: “We’ve all read your book, Samantha.” Obama, she recalls, repeatedly told her, “you get on my nerves.” But at the same time, when she wouldn’t speak up for idealism, Obama would ask her: “Are you sick, Power?” He wanted to hear it. It’s complicated.

Power regularly debated with herself about resigning in protest over Obama’s refusal to intervene decisively in Syria. She asks herself whether she’d become what Obama’s human rights critics said he’d become — just another “realist,” but one who “feels bad about it.” In the end, she stays, quoting a friend who tells her “the world is filled with broken places. Pick your battles, and go win some,” and quoting Obama — “better is good.” Perfect is rarely on the menu.

And then, in the best chapter in the book, Power gives us the ammo to see how even just striving for better can lead to unforeseen complications. The chapter is entitled “Toussaint.” In 2016, Power decides to visit Cameroon, Chad and Nigeria “to meet with people on the front lines of the fight” against the terrorist group Boko Haram, which had kidnapped nearly 300 schoolgirls, so that she could draw attention to their struggle the way a visit from a high-ranking American official can do. It was a dangerous trip and required a caravan of some 14 armored vehicles. Locals lined the roads on their way to Mokolo, a town in rural Cameroon. There, Power hears about how a village’s “vigilance committee” used stones and bows and arrows to kill a young woman who had entered a local market with a suicide belt under her hijab. She also recalls, though, how some of these same local guardian groups attacked people as “Boko Haram” in order to steal their livestock. Yes, not every good guy is a good guy.

But as Power is leaving the village an aide whispers to her: “As we were driving here our car hit a young boy.” The boy’s name was Toussaint. He was killed. “Had we not come,” she writes, “a 6-year-old boy would still be alive.” Nonetheless, the trip helped Power and others to lobby the United Nations for an additional $168 million in humanitarian assistance for people menaced by Boko Haram. Was it worth it? Again, she gives you all the ammo to decide.

Yet Power remains steadfast in her tilt: “The road to hell is paved with good intentions, to be sure,” she writes. “But turning a blind eye to the toughest problems in the world is a guaranteed shortcut to the same destination.”

I can imagine a course for incoming diplomats at the State Department that would use Power’s book as a text, and the final exam question would be: “In 500 words or less, explain whether you identify with the younger Power or the older Power.”

My answer: “Better is good, except when it isn’t. Because sometimes better is not good enough or because sometimes even just going for better can make things worse. And every president should want an older Power around to help sort out those choices.”

Thomas L. Friedman is a columnist for The Times.

Ariana Grande Links Up With BTS at Grammy Rehearsals, and Hey, How About a Collab?
TV News