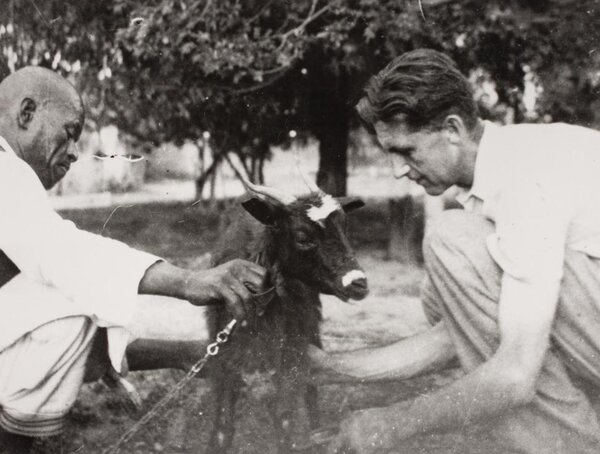 Essayist that she is, Rebecca Solnit pursues her subjects down multiple pathways of thought, feeling, memory and experience, aided by historical research and the intuitive literary hunch, as needed. Like George Orwell as essayist, the subject of her latest book and her model, she deploys the full human instrument in service of her curiosity. Orwell, of course, is best known for his novels “Animal Farm” and “1984,” and, second, for his reportorial work. But it is in his essays, a form capable of expressing both political passions and responses to life in its sensual immediacy, that a more complex Orwell can be seen. It is this side of him that Solnit brings into focus in “Orwell’s Roses,” a side, she asserts, that is eclipsed by our image of him as a dark prophet driven by political rage. She seeks to show us that Orwell was also capable of taking great joy in small things — in the surface of the earth, the weather, daffodils, hedgehogs, slugs, roses and hens — and such pleasure was intrinsic to his political vision.

During the same period in which Orwell went north to investigate conditions in the coal mines around Manchester and south to fight in the Spanish Civil War, he planted some roses at his cottage in Wallington, in the English countryside, where he immersed himself in his garden and animals — chickens and goats. Solnit finds the remnants of those roses (two bushes are blooming when she visits) and makes the roses the lodestar of her wide-ranging yet disciplined sequence of essays on the importance of joy in Orwell’s concept of freedom.

In the first part of the book, she establishes his conviction that the fight for “bread for all” was not enough; he believed that people have a right to roses too — to an existence in which beauty, delight, love and a rich interior life are possible. Then she seems to snatch this vision away. Just as Orwell always strove to see through the curtain of appearances to the truth, Solnit searches for the underpinnings of Orwell’s joy in the pastoral life. She traces his affection for the English countryside to an idealized, “naturalistic” aesthetic that emerged in the 18th century and had the effect of masking the impoverishment of the rural population by industrialization. Suddenly she is illuminating the imperial aspects of Orwell’s background, unexamined by him. Relentless, she delves into roses as symbols of a deeply rooted, authentic “Englishness,” showing us that in fact roses, like tea, were imported from China under the British Empire. This is Solnit applying economic and social analysis to longstanding cultural mythology. How, the reader wonders, is the life-loving Orwell she has just conjured going to survive this scrutiny?

She implicates us in these comfortable delusions, recalling, for example, Ralph Lauren’s use of the rose in his seductively Anglophilic clothing and home furnishing fabric patterns in the 1980s — iconography of the secure social insider, the essence of his brand. She reminds us of the rose’s status as a symbol of true love, and then reports on the arduous circumstances in South America under which those handy bouquets in our supermarkets are cultivated. By this point, the humanistic Orwell of the earlier parts of the book seems, along with his Wallington roses as expressions of joy, to have been thoroughly destroyed.

I won’t give away how Solnit rescues her portrait of Orwell from the bear trap she has sprung on it. Suffice it to say that in the end she throws us up on the shores of our flawed, vulnerable selves through a detailed portrait of Orwell dying in his mid-40s on an island in the Hebrides as he writes “1984.” That novel, Solnit convincingly shows, is not primarily about how totalitarianism works but rather about what it destroys: consciousness, experience, life lived with the full human instrument — the very vision of political freedom that she has earlier identified at the heart of Orwell’s values.

As he completes the book, Orwell both suffers and delights, reporting in his diary on “roses, poppies, sweet williams, marigolds full out, lupins still with some flowers.” Solnit doesn’t argue with her own counterpoint. She just creates a frame large enough to contain both revolutionary brilliance and unwitting reactionary associations in the same person — large enough to contain life’s contradictions in a way that only the essay, that humble literary mouthpiece, can.

A Poltergeist Who Adores Apricots and Cat-Loving A.I.