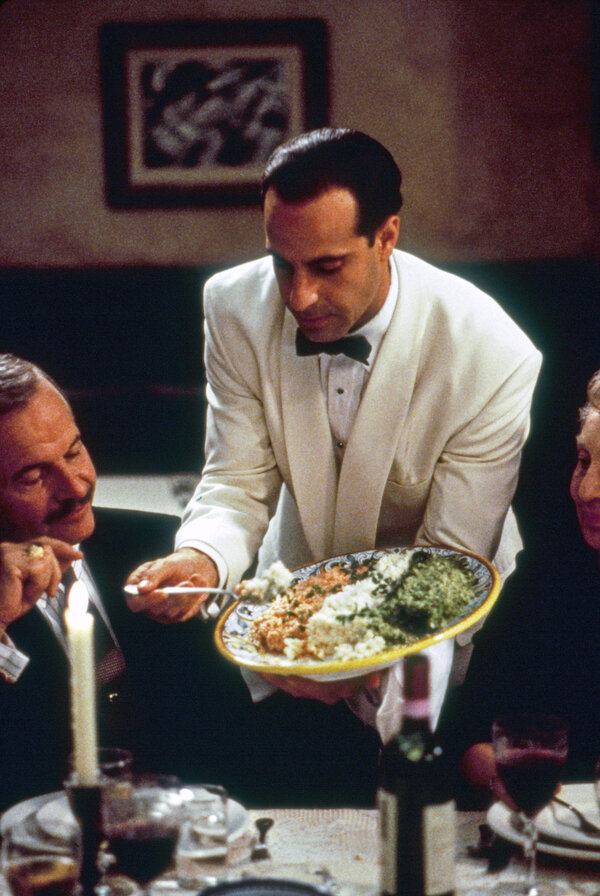 TASTE
My Life Through Food
By Stanley Tucci

My interest in Stanley Tucci’s gastronomic doings was seriously flagging when, in the nick of time, he got to the part about digging into a horse phallus with Meryl Streep.

He recounts the episode about two-thirds of the way through “Taste,” his food-focused memoir, and reveals that it wasn’t really a platter of penis before them but could so easily have passed for one that he blurted out as much, along with an expletive. Streep was unbowed. “She cut off a small piece,” he writes, then “chewed gingerly” before delivering her verdict.

“Well,” she decreed, “it does have a bit of the barnyard about it.” That first bite was her last.

Tucci and Streep were in France to promote the movie “Julie & Julia,” in which she played Julia Child and he was Child’s husband. They had gone to an out-of-the-way restaurant, intent on flaunting their epicurean bona fides. And they had ordered the house specialty, andouillette, assuming it meant many little andouille sausages, which they loved. It in fact meant one monstrous sausage of pig intestine, for which they discovered considerably less affection. So they swallowed their pride, along with gulps of wine to banish the offal truth, and asked for omelets instead. Food adventurism has limits.

Food reminiscences apparently don’t. Since the appearance of the book version of “Julie & Julia” in 2005, scores upon scores of like-spirited volumes with the effective subtitle “What I Cooked” or “What I Ate” have been published, and while the years, locales and motives for the meals vary, the essential form remains the same. An author who has feasted more widely, knowledgeably, intently or oddly than the average omnivore mines memories of his or her experiences, serving the reader virtual victuals that are seasoned, ideally, with insight and inspiration.

So Tucci’s “Taste,” whose actual subtitle is “My Life Through Food,” enters a bloated genre that has a high bar. Is his eating life so distinctive that it stands out from all the other writers’ and warrants expansive narration? The answer is yes and no. I kept wishing he’d teased out more themes — beyond, simply, his gusto — to tie together his days as an Italian-American boy whose lunchbox shamed his classmates’ and his international jaunts as a movie star who judges locations based on the quality of food in and around the set.

Authoritarians From Mussolini to Trump