Home » Books » We are dying for a lack of visionary leadership, says Tim Costello

When Tim Costello told his wife his next book would be called Love, her response took him aback. "No," she said over dinner, "I don't think you know enough about love."

"I took that to heart and it was rather demolishing," he says, teetering somewhere between deadpan and half-serious. 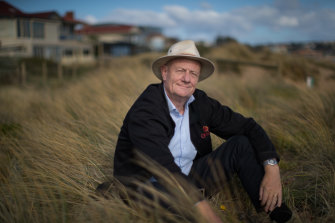 The Baptist minister and former head of World Vision had written two books, Faith and Hope, but broke the trilogy (on his beloved Merridie's advice) and called the latest A Lot with a Little.

"Rather than being stuck on writing Love, I thought, this is something I maybe can do … the puzzle that was myself. I've ended up doing things that I never really aimed for or wanted to do, and had passion in other directions, and was really trying to work out the mystery of myself to myself." 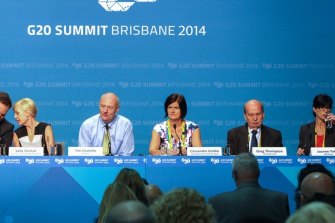 Members of the Civil Society, including Tim Costello, at the G20 Leaders Summit in Brisbane.Credit:Steve Christo/G20 Australia

Family was a formative influence in his life. The latest book starts by detailing his background, including his parents' upbringing, through to the unlikely – yet enduring – coming together of a Catholic and a converted, evangelical Baptist.

Costello says writing the book was revealing and it couldn't have been written until his father died. After reading it, his mother Anne said she hadn't realised how much his father "was still in your head".

"I loved him so much, and probably in part feared his disapproval so strongly, I took a long time to individuate. It was cathartic actually being able to recognise that."

Growing up in Blackburn with siblings Peter (later Treasurer under John Howard) and Janet, the Costellos debated all manner of issues around the dinner table. Despite having little in the way of material possessions, his parents worked on "the furniture of the mind"; a strong sense of social justice was instilled early on.

As head of World Vision, Costello added advocacy to its remit. Over many decades, he fought poverty and gambling, and advocated for the disenfranchised, especially the Indigenous.

"We're always asked the question: are we racist? I think it would be far simpler to say there is racism within all of us … the question is how much."

That Aboriginal people don't have voice and treaty in Australia, he says, reflects latent racism. "New Zealand has had a treaty since 1840, the Canadian first peoples [have one, there are] many different treaties with native Americans in America. The hysteria we get around voice and treaty and truth-telling …"

"What particularly distressed me with the rejection of the Uluru Statement from the Heart was I have heard politicians and the Caucasian community saying, 'When Aboriginal people get together and stop infighting, we will get together and we will look'. Well, they had 12 leaders and nations, and they got together with a unified statement and we knocked it down straight away. That profoundly shocked me. And then we get all the old reasons why it's all too difficult. It's devastating to me."

After stepping down from World Vision – where he spent 15 years – Costello says he is far from retired. So, does politics beckon? Though his initial response leaves the door open, he continues. "To be really honest, I have more power outside politics. People think that once you get into politics, you get to pull the levers of power. More often you get paralysed. So I think my corridors of power are not in the parliament, they're outside it."

These days, Costello is "feeling the least hopeful in all my life right at the moment". 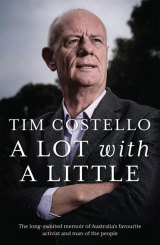 ‘A Lot With A Little’ by Tim Costello.

"I feel that the ethno-authoritarian, populous leaders that are on the world stage now, tearing up world rules – of trade, agreement even to deal with climate change – is right at the wrong moment … It's got to be all of us together, with the fires in the Amazon, the warming of the planet and with 65 million displaced people. The world after the Second World War resettled numbers like that and did it when we were much poorer, all as countries saying we can do this and work together."

Business has given up on the government leading and "waiting for leaders who are fearful". He believes giving people agency back is critical.

"There are really only two human emotions – hope and fear. And fear is the one the politicians are playing to all the time. So we need to keep hope alive," he says. "It wouldn't hurt to have a leader of the Mandela, Tutu, Gandhi type again, because we are dying for a lack of leadership."

A Lot With A Little by Tim Costello is published by Hardie Grant at $45.

New in Paperback: ‘The Browns of California’ and ‘The Far Field.’