Home » Books » Walter Tevis Was a Novelist. You Might Know His Books (Much) Better as Movies.

The wildly popular Netflix series “The Queen’s Gambit” has done for chess what Julia Child once did for French cooking. Chess set sales have skyrocketed; enrollment in online chess classes has surged. The series has been the subject of hundreds of articles and interviews. The novel that inspired the show, first published in 1983, has been on The New York Times’s trade paperback best-seller list for five weeks.

Yet little attention has been paid to Walter Tevis, the author whose creation has stirred all the commotion.

Tevis once pegged himself as “a good American writer of the second rank.” But Allan Scott, the screenwriter who first optioned “The Queen’s Gambit” in the 1980s, disagrees. Mr. Scott co-created and executive-produced the current Netflix show.

“I think very highly of Tevis,” he said in an email. “I think he was one of the best American writers of the 20th century. ‘The Queen’s Gambit’ lays out a terrific story very simply. Child, mother killed, orphanage, touch of genius, addiction. It’s Dickensian.” (It took decades to bring the book to the screen, Mr. Scott said, because studios thought the subject of chess was a commercial dead-end.)

Born in 1928, Tevis wrote six novels, a surprising number of which made high-profile leaps to the screen: “The Hustler,” about a young pool shark played by Paul Newman; “The Man Who Fell to Earth,” starring David Bowie as a lonesome alien; and “The Color of Money,” a follow-up to “The Hustler,” which won Mr. Newman his first Oscar. Tevis’s 1980 science fiction book, “Mockingbird,” a commentary on humanity’s dwindling interest in reading, has long had a modest cult following. 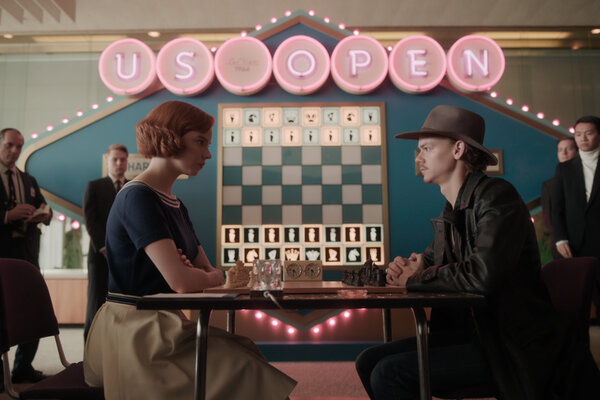 Tevis was a family man who played board games and fished with his kids; a popular professor of writing and literature at Ohio University in Athens; a cat-lover and movie aficionado; and a talented amateur chess and pool player. He was pale and gangly; some of his students called him “Ichabod Crane.” He was also a three-pack-a-day smoker, a serious gambler and an alcoholic who made several suicide attempts. His fiction often plumbs his psyche, metaphorically.

“He’s the hero of all his own books,” said his son, Will Tevis, 66, before correcting himself: “He’s the antihero.”

Tevis considered his terrain to be the world of underdogs.

“I write about losers and loners,” he told this newspaper in 1983. “If there’s a common theme in my work, that’s it. I invented the phrase ‘born loser’ in ‘The Hustler.’ In one way or another I’m obsessed with the struggle between winning and losing.”

Tevis was born in San Francisco, into what he called a “feelingless, uptight” home. His parents moved to Kentucky when he was 10. Because young Walter had a heart condition, his parents left him behind in a convalescent home, where he spent months drugged on phenobarbital like Beth Harmon, the main character in “The Queen’s Gambit.” In an essay published in 1990, Tevis’s first wife, Jamie, wrote: “He never got over the scars of the early experience with narcotics.”

When he left California to rejoin his family, Tevis found his new environment bewildering. In a 1981 interview, he said that “The Man Who Fell to Earth,” about an alien who lands in Kentucky and can’t adjust to life on this planet, was “disguised autobiography.”

“[It] has to do with my having moved from what I thought was the city of light, San Francisco, when I was 11, to Lexington, Ky., where I went to a tough Appalachian school in the fifth grade and was beaten up regularly,” Tevis said. (Tevis gave the movie version of the book a C-plus, calling it confusing, but when he met David Bowie found him to be “a wonderful man.”)

The day he turned 17, Tevis joined the Navy. On a ship home from Okinawa, he met Hilary Knight, who went on to illustrate the Eloise books. The two connected instantly, Mr. Knight, now 94, recalled, because both were “total misfits.”

“We were two people in a dream world, though his was much more logical than mine,” Mr. Knight said. “The other crew paid little or no attention to us. They didn’t want to know these weirdos. Walter was too smart, and the ship was full of dumbbells. We had a great time laughing about everything.”

“The Hustler,” drawn from Tevis’s rough-and-tumble pool hall experiences before and after the war, came out in 1959, followed by “The Man Who Fell to Earth” in 1963. Then, Tevis published almost nothing until 1980. He and his wife, whom he met when they taught at the same high school, raised two children while Tevis was at Ohio University. He played chess and shot pool, often with his colleague Daniel Keyes, who wrote “Flowers for Algernon.” Tevis drank heavily and his marriage suffered. Even so, his children remember Tevis as a devoted parent.

His daughter, Julia McGory, 63, said that his kids had experienced some of “the sadness and complexities of our father,” but “never doubted how much he loved us and enjoyed being with us.”

In the mid-1970s, Tevis sobered up, partly with help from Alcoholics Anonymous. Deeply frustrated by his writer’s block, he got a divorce and decided to try his creative luck in Manhattan. He began a relationship with, and eventually married, Eleanora Walker, who worked for his agent. He reconnected with Mr. Knight: “We became great friends again,” Mr. Knight said.

Tevis also regained his writerly mojo, finishing four more novels and a collection of short stories. He helped convince Paul Newman to star in the movie version of “The Color of Money.” He also wrote “The Queen’s Gambit” during those years. The writer Tobias Wolff called it an “overlooked masterpiece.”

“Tevis has a gift for vivid characterization and propulsive narratives,” Mr. Wolff said in an email. “His style is direct and efficient, never calling attention to itself; yet it grows in power through the course of a novel by its very naturalness.”

Describing young Beth learning a chess move in “The Queen’s Gambit,” Tevis wrote: “She decided not to take the offered pawn, to leave the tension on the board. She liked it like that. She liked the power of the pieces, exerted along files and diagonals. In the middle of the game, when the pieces were everywhere, the forces crisscrossing the board thrilled her. She brought out her king’s knight, feeling its power spread.”

More lyrically, as Beth sits bored in class, Tevis wrote that her “mind danced in awe to the geometric rococo of chess, rapt, enraptured, drawing in the grand permutations as they opened to her soul, and her soul opened to them.”

In the book, Beth is a harder-edged, less obviously triumphant character than in the Netflix series Tevis once explained why he made the choice to portray a female chess champion. “Sometimes I was really more wrapped up in the idea of intelligence in women, for which I have an enormous respect and a kind of awe, more wrapped up in that even than the game of chess itself,” he said.

In a 1981 interview, Tevis said he’d realized in middle age that “life is worth living.” He hoped to write one book per year for the rest of his life. Just three years later, he died of lung cancer, at 56.

Tevis’s publishing career may not be over. His estate holds two unpublished children’s books, said Susan Schulman, the agent who represents it. “Gangster Cat” is the story of a New York City cat and his gang. “Turnip Island” is the story of a family who live on an island of nothing but mud.

If he were still alive, Will Tevis said, his father would be “basking in glory right now. He had desires for the spotlight. He wanted to be known and noticed.”

Attica Locke, Novelist and TV Writer, Has Some Suggestions for Hollywood