THE ARSONIST
A Mind on Fire
By Chloe Hooper

To describe a bushfire is to describe a monster. We speak of flanks, fingers, tails and tongues, Chloe Hooper observes in “The Arsonist,” of a predatory, devouring hunger. On Feb. 7, 2009, a rough beast slouched its way across Victoria, Australia’s southernmost mainland state. The conditions were explosive: a dozen years of drought; a breathless, record-breaking swelter; and gale-force winds. That Saturday — later known as Black Saturday — 400 separate fires raged, which claimed 173 lives and generated the equivalent heat of 500 atomic bombs. It was a dark herald of the annihilation future fire seasons would bring.

The latest book by the Australian writer tells the story of just one of the Black Saturday bushfires, a blaze deliberately lit on the outskirts of Churchill in the Latrobe Valley — coal country. Only 1 percent of Australia’s bushfire arsonists are ever caught, so when a suspect emerged within days, detectives were wary: “Surely the very first person they were narrowing in on couldn’t be the one?” Brendan Sokaluk, whose distinctive, sky-blue sedan had been abandoned meters from the ignition point, admitted responsibility, but not intent. The Churchill blaze — which left 11 dead — had been an accident, he insisted, the result of a wayward cigarette.

With propulsive energy, “The Arsonist” follows the case against Sokaluk, a 39-year-old former volunteer firefighter, from the arson investigation’s first frantic hours to the courtroom verdict. But first, Hooper takes us into the belly of the beast: birds falling from the sky with their wings burning; beehives combusting from the radiant heat; farewell texts escaping from fire-ravaged homes (“Dad im dead I love u”). The elemental terror of Black Saturday requires little embellishment, only the quiet dignity of witness. It’s this restraint — as intelligent as it is compassionate — that elevates “The Arsonist” from slick true-crime procedural to cultural time capsule. 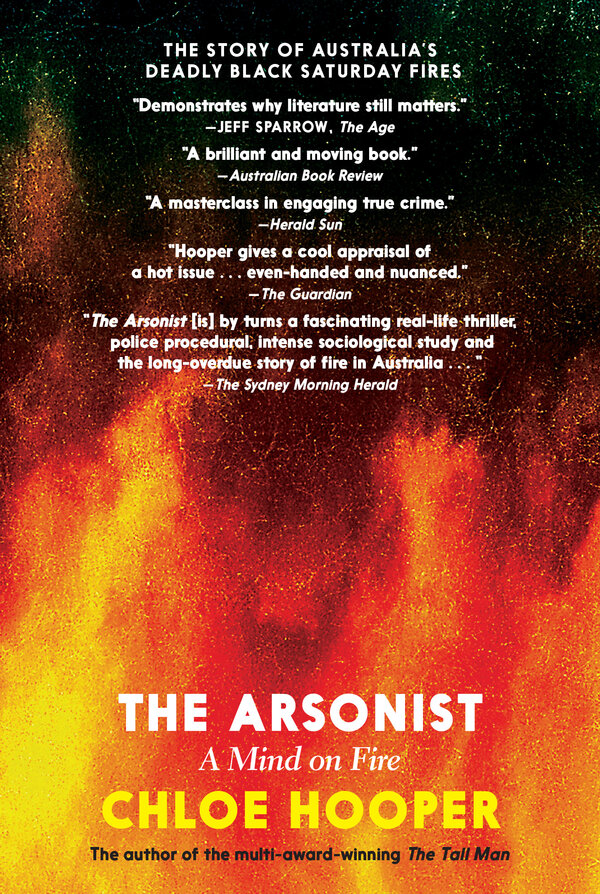 What kind of mind wills the red havoc of a bushfire? Sokaluk’s trial pitted two versions of that answer against each other: a cunning, ice-hearted sociopath, and a long-persecuted naïf. “Brendan was both things,” Hooper writes. “Guileful and guileless, shrewd and naïve.” But how much easier it is, she shows, to conjure a devil than to confront more nebulous and unrelenting foes, like corporate negligence or climate change.

Hooper did not attend the trial, nor did she interview Sokaluk. Relying on transcripts and reports, she renders him in silhouette: the schooling that left him barely literate; the workplaces that treated him as a “‘half-wit’ whipping boy”; the health system that failed to diagnose his autism until his trial; and his town emptied of jobs when Victoria’s energy infrastructure was privatized. And so “The Arsonist” becomes a sharp-edged portrait of social as well as pyromaniacal desolation — a “sociology of fire.” “The arsonist may be a misfit, an outlier, even a sociopath,” Hooper writes, “but he inhabits the same environment and the same community as his victims.”

Hooper, a lauded investigative writer and gothic novelist, has been described as an “antipodean Joan Didion,” but Australia has its own tradition of evocative reportage that excavates the human from the inhuman. At its best, that tradition produces rich cartographies of discomfort and doubt (as in the work of the mighty Helen Garner). But Hooper is largely absent from “The Arsonist.” She disguises her authorial presence as a kind of coolheaded omnipotence. When she does appear in her book’s final pages, she is slippery even to herself: “I have spent years trying to understand this man and what he did, my own motivation sometimes as indecipherable as he is.”

It’s a palpable absence from a project so determinedly humane, one that raises so many questions about culpability, blame and collective responsibility. Learning who Sokaluk is does not absolve him of his misdeeds, but it does not absolve us either. “The small world of someone like Brendan is not so unconnected to our own as it might seem,” Hooper writes. “We ignore this at our peril.”

The Beekeeper of Aleppo: Compelling tale of war and hope