John Steinbeck is best known for his weighty, quintessentially American classics like “The Grapes of Wrath” and “East of Eden.”

But one of his short stories, now published in English for the first time, is not about social injustice, arduous journeys or humanity’s capacity for cruelty. Rather, it is a funny tale about a Parisian chef whose cooking companion is a cat.

During a mid-20th-century stint in Paris, a city he loved, Steinbeck wrote a series of 17 short pieces, mostly nonfiction, for the newspaper Le Figaro. He composed them in English and they were translated into French. One of those submissions, a fictional piece called “The Amiable Fleas,” can be found in the new issue of The Strand Magazine, a literary quarterly based in Birmingham, Mich.

The magazine has previously unearthed pieces by Ernest Hemingway and Raymond Chandler. In 2014 it featured another short story by Steinbeck, the Nobel Prize-winning author. That one had been composed for a patriotic radio show during World War II, and Orson Welles read it aloud in a 1943 broadcast.

Andrew F. Gulli, the Strand’s managing editor, said that in his search for stories to publish, he hired a researcher who sifted through manuscripts at the Harry Ransom Center, a rare books and manuscripts collection at the University of Texas at Austin.

“I read this one and I was like, ‘Oh my god,’” Mr. Gulli said of “The Amiable Fleas.” “From the perspective of a short story editor, this one really interested me. There was something universal about it with the gourmet, the cat, the family conflict and the tension.”

In the story, a fictional restaurant called The Amiable Fleas is situated not far from the Place de la Concorde, a plaza along the Seine. (The restaurant could be a nod to Les Deux Magots, a cafe known as a famous gathering place for writers and artists that still exists.) It is run by a chef named Mr. Amité, who has received one Michelin star and is eager to earn another.

“He’s very, very flustered about everything,” Mr. Gulli said. “He relies on his cat to taste the food and nod his approval or disapproval. The cat is a very magnificent cat named Apollo.”

If you’d like to read the 1,500-word story for yourself, the rest of this paragraph could spoil your appetite: On the day the Michelin inspector is expected to dine, there is a series of mishaps, and Mr. Amité steps on Apollo’s tail. Then he kicks the cat, which stalks off to an alley in apparent anger. With Apollo gone, the meal is a disaster. But then comes a plot twist, a second chance and a revelation about a secret ingredient.

“The Amiable Fleas” might seem like light fare for a writer better known as a chronicler of human suffering. But comedy was also important to Steinbeck, said Susan Shillinglaw, an English professor at San Jose State University in San Jose, Calif., and a former director of its Martha Heasley Cox Center for Steinbeck Studies. 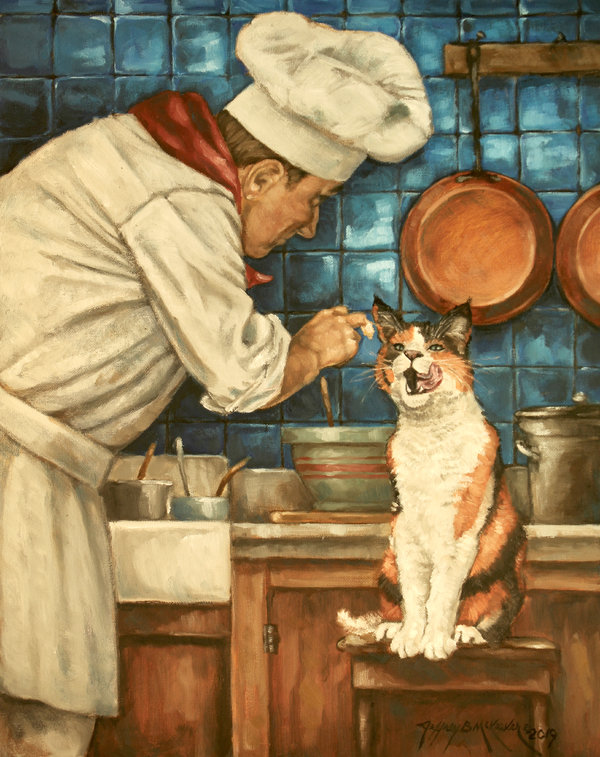 “He liked to spin up funny stories and he had a great sense of humor,” she said. “People might say this isn’t signature Steinbeck. But it kind of is, because he does have that range and that flexibility.”

Steinbeck’s novels of the 1930s, like “Tortilla Flat,” “Of Mice and Men” and “The Grapes of Wrath,” which was awarded the Pulitzer Prize for fiction, were largely rooted in a particular time and place. They followed people who struggled around the time of the Depression, and who lived in — or were drawn to — the author’s home state, California.

But then came the ’40s, a time of transition. Steinbeck wrote a travelogue with the marine biologist Ed Ricketts, did some war reporting and finished a few more novels, including “Cannery Row.” He had a difficult year in 1948, when he split from his second wife and when Mr. Ricketts, a good friend, died unexpectedly.

The ’50s were better. Steinbeck married for the last time in 1950, published “East of Eden” in 1952 and traveled frequently with his wife, Elaine. Despite a lifetime of restlessness, Steinbeck’s love for Paris was evident, Dr. Shillinglaw said. At the time he was writing for Le Figaro in 1954, she added, “he was probably a happy man.”

In his first piece for the newspaper, Mr. Steinbeck wrote that he thought it might be presumptuous for him, a foreigner, to write about Paris. But he added that he changed his mind after considering the perspective that an outsider can bring.

“The uninstructed eye sees things the expert does not notice,” Steinbeck wrote in that first submission to Le Figaro. “Mine is a completely naïve eye on Paris — but it is an eye of delight.”

Shortly thereafter came the story of the nervous Mr. Amité and the imperious Apollo.

It was not only about a chef and his cat. The piece began more broadly, with a defense of “little stories” and “soft verities,” which, the narrator argued, could sustain people better than hard news stories, or “the drums of daily doom.”

And it poked fun at the intellectuals who gathered at the fictional restaurant, describing a painter who worked in invisible ink, an architect whose reputation was staked on his hatred for flying buttresses, and a poet “whose work was so gloriously obscure that even he did not understand it.”

In the ’60s, Steinbeck won the Nobel Prize in Literature. He once again turned his focus to life in the United States, examining it critically in the memoir “Travels With Charley: In Search of America,” about a road trip he took with his poodle. He died of heart failure in 1968, at 66.

Steinbeck was an old hand at gravitas, but he should also be remembered for his modesty and enduring appreciation for comedy, Dr. Shillinglaw said, which shone through in pieces like the ones he wrote in Paris.

“What’s important about this is his range — that he could write something silly as well as be profound,” she added. “I think that sort of effortless charm is characteristic Steinbeck.”

'I didn't sleep with everyone…I wouldn't have had time to paint!'