Paralysed and suicidal: A bullet in the neck left special forces soldier Toby Gutteridge unable to move but this SBS hero’s real battle began when the shooting stopped 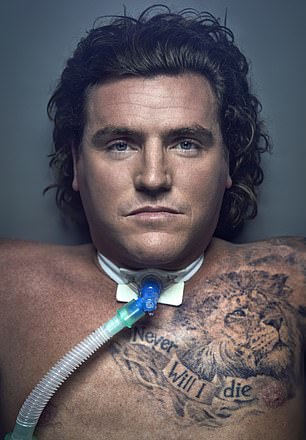 Never Will I Die

There was no pain, no screaming. The moment he was shot, Toby Gutteridge slumped to his knees and toppled forward into the dirt of an isolated compound in Afghanistan. Under fire, in the dust and chaos of a routine operation gone wrong, his mates stepped over him, assuming him dead.

It was only thanks to a sacred tenet of the British special forces — no man left behind — that he was rescued. Fellow soldiers dragged his body out of the compound and were astonished to find he had a pulse.

Feeling around in the pitch darkness, they located the entry wound, a gaping hole in his neck into which one stuck his fingers to stem the blood loss till an evacuation helicopter arrived.

Gutteridge came round through a haze of morphine at the Queen Elizabeth Hospital in Birmingham. The bullet had shattered his spinal cord, leaving him paralysed from the neck down.

He could not even turn his head — which, post-surgery, was attached to his body by 51 metal staples — if someone entered the room. 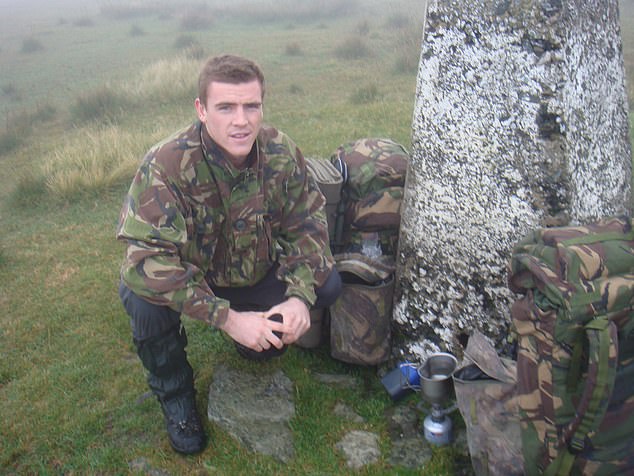 Toby on exercise with the Marines, we are having a short stop and getting a cup of coffee on the go in 2006 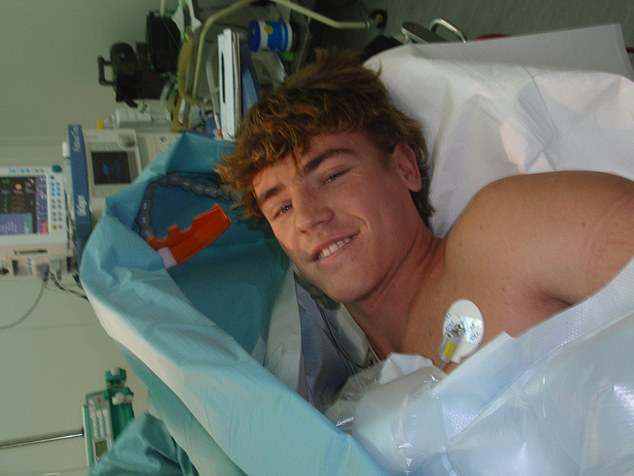 At 24 years old, he had gone from being one of the fittest men on the planet — a proud new member of the elite Special Boat Service, selected after entrance tests that included jungle training, jumping out of aeroplanes, marching waist-deep in snow and running back-to-back marathons — to ‘a sack of spuds’.

More than ten years later, he tells of how he brought himself back from the brink.

He was probably destined to be a soldier: growing up in South Africa, he was fascinated by his stepfather’s kit bag (a memento of the war in Angola), with its medals, badges and little cardboard boxes of bullets.

Never Will I Die, his motto, was a pledge made with a boyhood friend as they built treehouses complete with camouflage and barbed wire. 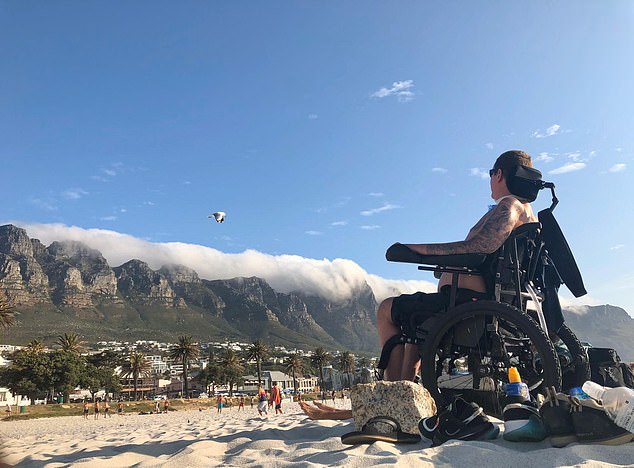 Toby in Cape Town South Africa on the beach, his first time back to South Africa since his injury 10 years ago

But he lost his way from age 12 when the family split up and his English-born mother moved him and his siblings first to America then to England. Rootless, shifting from place to place and dumped with relatives he didn’t know, he fell into drink and drug use.

Back in South Africa, hanging out in the townships drinking beer and scoring cocaine, he kicked the taillights out on a car whose owner confronted him with a gun. It was a wake-up call: ‘If I stayed in Johannesburg I would end up in prison, or in the mortuary.’

So he set himself the challenge to join the toughest military unit he knew of, the Royal Marines. Having served with them in Afghanistan, he aimed for — and won — the coveted SBS beret and badge.

Elite forces are the ‘tip of the sword’ Gutteridge explains (for their ability to cut deep, draw blood and make enemies suffer). He didn’t join the Army to become a chef or mechanic, but because he wanted to go to war. He loved every minute, including the drama of that final assault.

As one of his colleagues fired a warning shot to bring suspect vehicles to a halt, a helicopter hovered above the ground in front to create a ‘brown-out’, a choking cloud of dust that would prove cover for him and his mates.

They were expecting the vehicles to scatter, making their drivers and passengers easy to pick off: instead, they came into the compound, necessitating an unplanned attack.

In an awful irony, Gutteridge had been shot in the shoulder during a similar raid two weeks earlier, suffering what his mates called a ‘million dollar wound’, as it was a passport home without being life-threatening.

But having been patched up, he refused to leave his unit. Dependent — even today — on a tracheostomy tube that keeps him breathing 18 times a minute, he has had to live with making the wrong call.

At first, when he awoke in Birmingham, there was blind panic. He was screaming inside but, at that point, could not speak. No one around his bedside could hear him. He gathered he was alive only because his brother had refused permission for doctors to switch off his life support. Unable to move, his world was a small patch of ceiling above his bed. 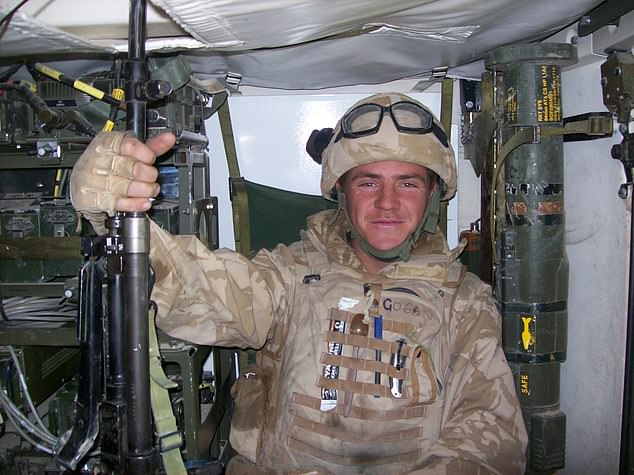 The author in Herrick 7 Afghanistan, in 2007, holding the general-purpose machine gun while sitting in the back of a Viking, an armoured vehicle and people carrier

Hospital therapists helped him communicate by blinking, using an alphabet board. It could take 20 minutes to decipher a single word. Not surprisingly, a massive depression followed, which he struggled to conquer.

Was it worth going on? He often thought not and even considered suicide (which in his case would be a death by ‘natural causes’ — as it is his right to refuse medical treatment and have his breathing tube removed). He completed the paperwork and put his financial affairs in order. But something about having the choice to die stirred his will to live.

He had survived thus far because of his underlying physical fitness he reckoned, and the point of all the ultra-marathons and long marches during military training had been to teach him to endure — and endure he would, whatever came his way.

Not that it was plain sailing from there on. Every penny of his compensation — about £500,000 — went on buying and adapting a house in Dorset, near his old unit. The care package he received from the NHS was shockingly inadequate, a situation only corrected when a determined former member of the SBS and a military charity intervened. 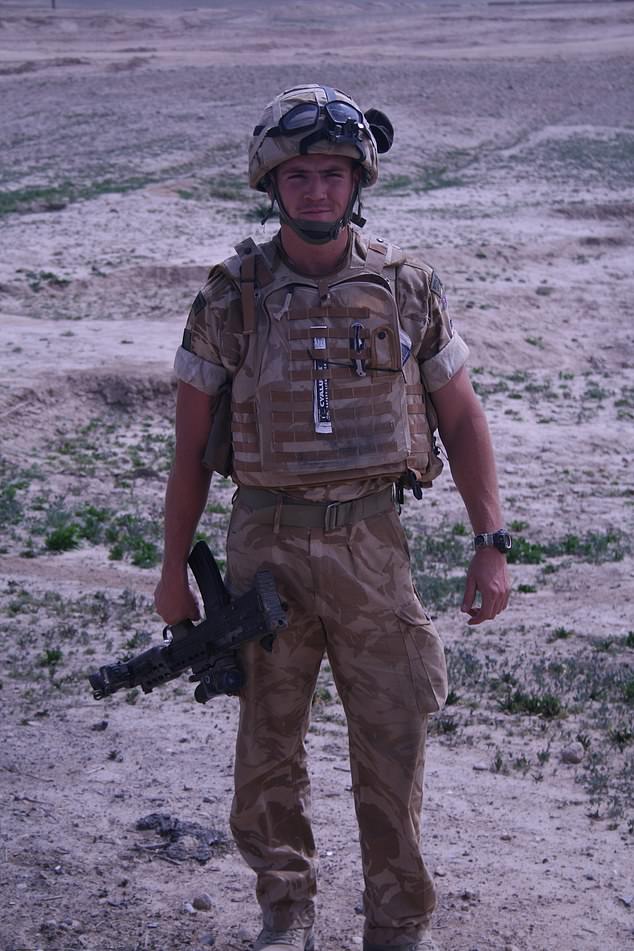 Toby pictured in Afghanistan, in 2007, on Herrick 7 again in the Sangin Valley Helmand province 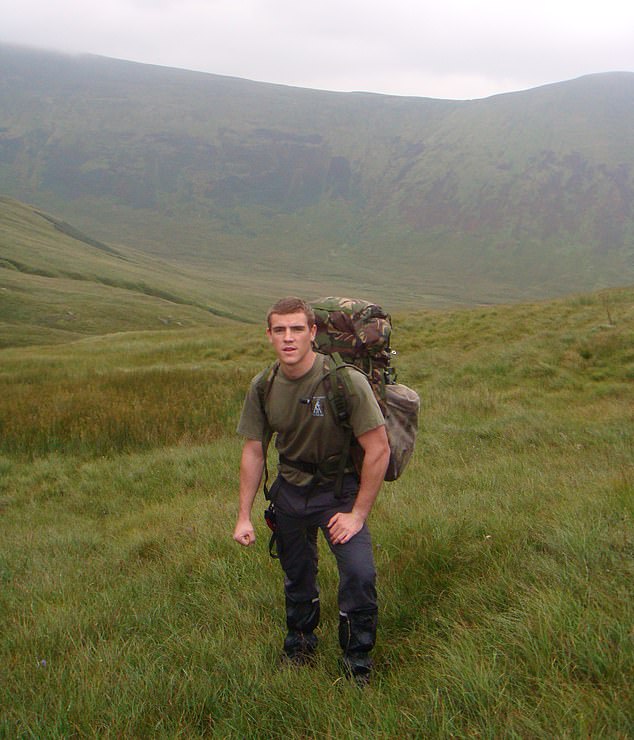 In his down time Toby would go hiking and camping in the Scottish Highlands, as he was here

He was sometimes overwhelmed by a sense of loneliness and loss, so much so he was sent to the Priory, the mental health clinic, to help get him back on track.

If you think all this sounds depressing, it isn’t. And nor (despite its title) is this the simple story of a wounded soldier who triumphs against the odds.

Yes, it’s a compelling tale of incredible determination: personified in the photo of Gutteridge on the book jacket, gazing steadily into the camera, with a huge tattoo of a lion across his chest and words ‘Never Will I Die’. That really says it all.

But what makes this account of a journey to hell and back so fascinating is that the devastation of Gutteridge’s body somehow triggered the unleashing of his mind.

Despite being the product of a fractured family, with little formal education, he had already become a ‘thinking man’s soldier’ by joining the special forces (unlike other troops, undercover soldiers are expected to think for themselves rather than simply follow orders).

And while imprisoned in his wheelchair, he has slaked a previously unimagined thirst for education, achieving four A*s at A-level in business studies, law, English literature and philosophy, before going on to achieve a first-class business degree. 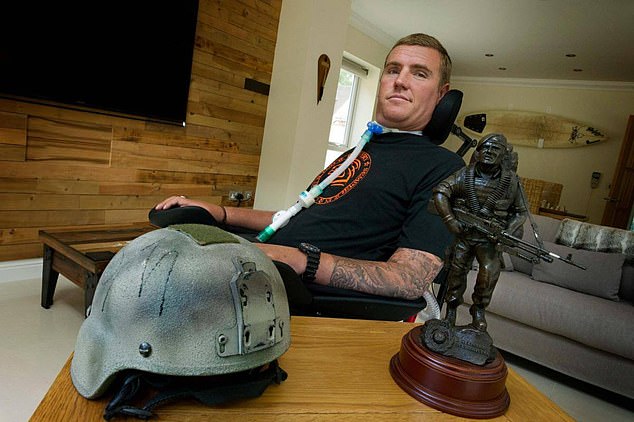 While imprisoned in his wheelchair, he has slaked a previously unimagined thirst for education, achieving four A*s at A-level in business studies, law, English literature and philosophy, before going on to achieve a first-class business degree. Pictured with the helmet that saved his life after it took a round that ricocheted off 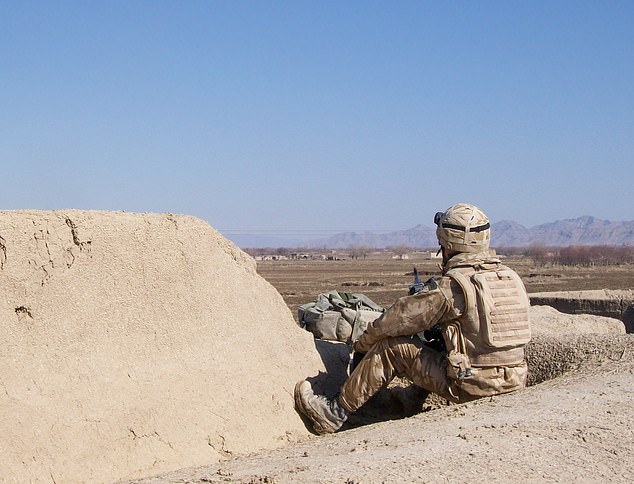 Toby was on patrol in the Sangin Valley Helmand Province in Afghanistan in 2007 on Herrick 7. As he was the general purpose machine gunner he had to climb onto a roof so he could get a better vantage point in case of an enemy attack

He has read widely, studying both Dylan Thomas and the business strategies of Elon Musk.

The war between the Montagues and Capulets in Shakespeare’s Romeo and Juliet speaks to the soldier in him. He has been captivated by the ideas of the ancient philosophers and their writings on justice, equality, politics and beauty.

He has had lots — and lots — of therapy. All of which makes him an eloquent storyteller, who can conjure up the sights, sounds and smells of the intensive care ward every bit as stirringly as the badlands of Afghanistan.

His unsparing analysis of his own strengths and weaknesses, his near-suicide and monumental effort to build a new life — which now includes Bravery, a business supplying kit for extreme sports which supports street children in Africa, and a fiancée, Savannah (one of his former carers) — is sometimes heartbreaking.

In his dreams, he is still able-bodied, always running, jumping, surfing. But life is good. If he had his time again, he says, he would make the same decisions. That’s hard to believe, but maybe that’s what marks the elite soldier out from the rest of us.